Elon Musk has an agreement to acquire Twitter for about $44B 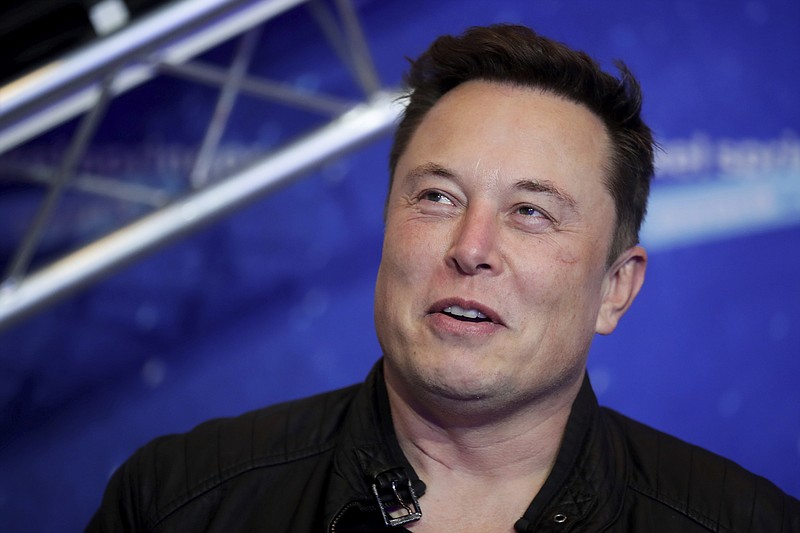 Tesla and SpaceX CEO Elon Musk arrives on the red carpet for the Axel Springer media award in Berlin on Dec. 1, 2020. Musk says he has lined up $46.5 billion in financing to buy Twitter, and he’s trying to negotiate an agreement with the company. The Tesla CEO says in documents filed Thursday, April 21, 2022 with U.S. securities regulators that he’s exploring a tender offer to buy all of the social media platform’s common stock for $54.20 per share in cash. (Hannibal Hanschke/Pool Photo via AP, File)

By TOM KRISHER and MATT O'BRIEN

Billionaire Elon Musk has reached an agreement to acquire Twitter for approximately $44 billion, the company said.

The outspoken Tesla CEO, the world's wealthiest person, has said he wants to buy Twitter because he thinks it's not living up to its potential as a platform for "free speech." He says it needs to be transformed as a private company in order to build trust with users and do better at serving what he calls the "societal imperative" of free speech.

Twitter said it will become a privately held company after the sale is closed.

"Twitter has a purpose and relevance that impacts the entire world," its CEO Parag Agrawal said in a tweet. "Deeply proud of our teams and inspired by the work that has never been more important."

Musk describes himself as a "free-speech absolutist," although he hasn't been exactly clear what he means by that. In a recent TED interview, the billionaire said he'd like to see Twitter err on the side of allowing speech instead of moderating it. He said he'd be "very reluctant" to delete tweets and would generally be cautious about permanent bans. He also acknowledged that Twitter would have to abide by national laws governing speech in markets around the world.

Twitter's board at first enacted an anti-takeover measure known as a poison pill that could have made a takeover attempt prohibitively expensive. But when Musk outlined the financial commitments he'd lined up to back his offer of $46.5 billion -- and no other bidders emerged -- the board opened negotiations with him.

"I hope that even my worst critics remain on Twitter, because that is what free speech means," he tweeted.

Twitter's board has flexibility in judging Musk's proposal not just on the finances but also the specifics of his business plan and how it could affect users, advertisers and employees -- some of whom might leave, said Kevin Kaiser, a finance professor at the Wharton School at the University of Pennsylvania.

"What's critical for the board is whether they think it's in the best interest of the company," Kaiser said. "That can come from many, many factors."

Kaiser said the board could decide that Musk's plan has "too many negative impacts," but that would be a hard case to make given how much Musk is offering to pay.

Asked during a recent TED talk if there are any limits to his notion of "free speech," Musk said Twitter or any forum is "obviously bound by the laws of the country that it operates in. So obviously there are some limitations on free speech in the US, and, of course, Twitter would have to abide by those rules."

It won't be perfect, Musk added, "but I think we want it to really have the perception and reality that speech is as free as reasonably possible."

While Twitter's user base of more than 200 million remains much smaller than those of rivals such as Facebook and TikTok, the service is popular with celebrities, world leaders, journalists and intellectuals. Musk himself is a prolific tweeter with a following that rivals several pop stars in the ranks of the most popular accounts.

Shares of Twitter Inc. rose 5% Monday to $51.50 per share. On April 14, Musk announced an offer to buy the social media platform for $54.20 per share, or about $43 billion, but did not say at the time how he would finance the acquisition.

Last week, he said in documents filed with U.S. securities regulators that the money would come from Morgan Stanley and other banks, some of it secured by his huge stake in Tesla.

Musk is the world's wealthiest person, according to Forbes, with a nearly $279 billion fortune. But much of his money is tied up in Tesla stock -- he owns about 17% of the electric car company, according to FactSet, which is valued at more than $1 trillion -- and SpaceX, his privately held space company. It's unclear how much cash Musk has.

Print Headline: Elon Musk has an agreement to acquire Twitter for about $44B