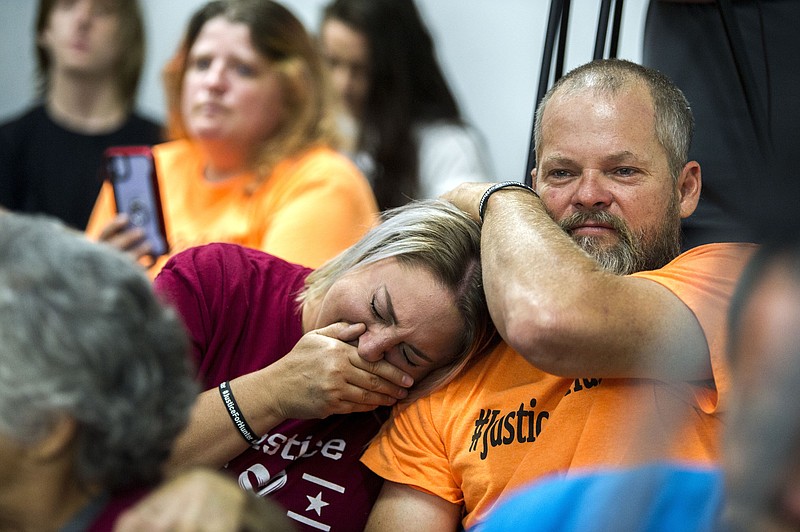 Phillips' decision was met with clapping and cheers of "thank you, Jesus" by family members and friends who gathered in the courthouse. Phillips of the 5th Judicial District was named special prosecutor for the case July 12 and was passed the Arkansas State Police investigative file July 15.

To be charged with manslaughter, a person must be found to have recklessly caused the death of another person, an affidavit for Davis states. A conviction on the charge carries a sentence of three to 10 years in prison.

"I also want to caution you about this: The affidavit with the arrest warrant is merely an allegation from the state of Arkansas," Phillips said during the news conference. "It is a charging document only. It does not confirm guilt. Only a jury can do that. So please do not confuse the documents that's been prepared with any kind of final adjudication. It is not."

The former deputy surrendered to state police Criminal Investigation Division agents about noon Friday, according to a state police news release. Davis, 30, of Ward was taken to the Lonoke County jail. He will be transported to an undisclosed county jail where he will await a bail hearing scheduled for Monday morning.

"This defendant will be treated as anyone else," Phillips said Friday. "If you talk to prosecutors, they will tell you the one area they get chewed out about the most is the bonds."

He went on to explain that bail is not there to keep those accused of crimes in jail but to ensure anyone charged will show up to future court proceedings.

Hunter Brittain's family members said Friday that they wanted murder charges to be filed against Davis but were happy that a felony charge was lodged.

"As long as he gets a felony charge where we don't have to worry about him owning a gun," said Rebecca Payne, Brittain's grandmother who raised him in the last years of his life. "There's a lot of people right now that are really concerned he might get his job back, but with a felony charge he cannot. Guns would be out of the question for him, so we're happy about that part."

Charges for law enforcement officers involved in deadly-force cases are rare in the state and convictions are even rarer.

In 2010, former Bella Vista officer Coleman Brackney was charged with felony homicide in the shooting of 41-year-old James Ahern after a high-speed chase that January. He later pleaded guilty to negligent homicide, a Class A misdemeanor, and was sentenced to 30 days in jail and fined $1,000.

Three years later, Brackney was hired as the Sulphur Springs police chief. He kept the position until December 2019, according to state documents.

Joshua Hastings, a Little Rock officer who shot 15-year-old Bobby Moore in August 2012, was charged and tried twice in a manslaughter case. Prosecutors dropped the charge in 2014 after both trials ended with jurors unable to reach verdicts.

In April 2017, nearly five years after her son was killed, a jury in the federal trial awarded Sylvia Perkins $415,000 in damages, saying Hastings violated Moore's Fourth Amendment right to be free from excessive force when he fired two bullets into a car Moore was driving. Later, Hastings was ordered to pay an additional $382,585 in attorneys fees and costs to Perkins. Hastings filed for bankruptcy in March 2018.

Davis was fired soon after the shooting of Hunter Brittain. He has retained Little Rock attorney Robert Newcomb, who has represented other fired police officers.

"The state has the right to file the charges they think are appropriate," Newcomb said about 1 p.m. Friday. "The defendant has the right to enter a plea of not guilty. Mr. Davis plans to plea not guilty and request a trial before our citizens."

Newcomb said he and his client learned about the charges while watching Phillips' 10 a.m. news conference.

Brittain's family retained national civil-rights attorneys Ben Crump and Devon Jacob after the case received widespread attention. Jacob said Friday that the family was notified of the charges about 15 minutes before the news conference.

"The family appreciates that the prosecutor conducted a complete investigation, and they will trust the courts will provide the justice that they are seeking," Jacob said.

A summary on the affidavit states that Davis fired one shot that struck Brittain in the neck during a 3 a.m. traffic stop near Mahoney's Body Shop, south of Cabot, at 7180 Arkansas 89 South.

During the traffic stop Brittain exited the truck and moved to the rear as the vehicle rolled backward toward the front of Davis' patrol car, according to a statement from state police special agent Cpl. Gregg Bray that was included in the affidavit.

Bray stated that Davis notified dispatchers of a shot fired after Brittain fell to the ground. Jordan King, the passenger in Brittain's truck, was detained as the truck was cleared. After the truck was cleared, aid was rendered to Brittain, who was transported to Baptist Health Medical Center in North Little Rock by Metropolitan Emergency Medical Services where he later died.

King told investigators that Brittain was working on his truck's transmission with friends on the evening of June 22 and the early hours of June 23, according to the affidavit. King and Brittain noticed a police vehicle following them during a test drive of the truck, he said.

"Brittain slowed down, put his blinker on and pulled to the left side of the roadway," King said in the affidavit.

"As they were getting pulled over by the deputy, they were laughing and thought it was funny because the truck was smoking, and that Brittain was trying to get off the highway," the affidavit states.

Davis' account of the shooting is that Brittain continued driving his white GMC truck briefly after Davis had initiated the traffic stop. He noted the vehicle crossed the southbound lane and at one point stopped in the northbound lane. The truck's engine revved at this point. The dispatch center was not notified of a pursuit at the time because Davis told investigators he noticed Brittain was attempting to turn into the auto body shop, the affidavit states.

King told police that he and Brittain opened their doors as soon as they stopped because the vehicle was smoking. King said Brittain left the vehicle, and that he didn't hear any commands given to Brittain regarding showing of hands or anything similar before hearing the gunshot.

The affidavit says Davis remembered Brittain exiting the truck before the deputy could get his patrol vehicle in park. He said Brittain slipped on gravel as he quickly made his way to the rear of the truck. Davis also said he gave several verbal commands for the teen to get back into the vehicle, to show his hands and to stop, the affidavit states.

Davis told investigators that he fired his weapon as Brittain began to move his hands from inside the bed of the truck, the affidavit states. As the bullet struck Brittain, Davis saw a container fly from the teen's hands and land on the ground.

According to the affidavit, Davis said he "could not see Brittain's hands nor what was in his hands prior to discharging his county issued firearm."

Attorneys for Brittain's family have said the teen was grabbing a blue plastic bottle of antifreeze to place behind the wheel because the vehicle wouldn't shift into park.

The affidavit states that no firearms were found in or around Brittain's truck.

Crump and Jacob also represented the family of George Floyd, a 46-year-old man who died last year while in police custody in Minneapolis and whose death helped spark a wave of protests across the nation focused on police brutality and racism. Officer Derek Chauvin was convicted of murder in Floyd's death.

Sheriff John Staley fired Davis days after the shooting for breaking department policy by not turning on his body camera before encountering a member of the public. The sheriff said at that time there was no video of the shooting, only the aftermath.

The sheriff released a video Friday after the announcement of the charges saying that any of his deputies who violate the law and policies will be held accountable.

"The former deputy failed to follow my policy about proper use of body-worn cameras, which is why I terminated his employment," Staley said. "The special prosecutor has now decided that this former deputy must face judge and jury to explain his actions in this incident. I did my job, and now the justice system will do its job."

Davis was hired as a deputy in Lonoke County in 2013 after working for a transport supervisor for the jail for about a year, according to his application acquired by the Arkansas Democrat-Gazette through an Arkansas Freedom of Information Act request. He was promoted to sergeant in January of last year.

After his firing, Davis requested a grievance hearing from Lonoke County. The county has yet to announce whether it will grant the hearing.

Brittain's death has led family members and others to call for a state law that would require all body cameras to be active when police officers interact with the public. Kwami Abdul-Bey, political action chairman for the Jacksonville NAACP, voiced support for "Hunter's Law" at a rally July 6 after Brittain's funeral. He said the organization intends to help write and get a bill proposed in the next legislative session.

The family's attorneys have said they plan to file a civil suit.

Officials repeatedly denied requests from the Arkansas Democrat-Gazette to release body-camera footage from the shooting, citing it as part of an ongoing investigation.

The Arkansas State Police and Lonoke County Prosecuting Attorney Chuck Graham initially denied oral requests for the footage in the days after the shooting. Police denied a formal Freedom of Information Act request for the footage July 14, and Phillips, the special prosecutor, denied a July 14 formal request on July 19.

An email from the state police also stated that Graham, who had recused, had opposed the release of the footage at that time.

Graham, who officially recused himself from the case July 8, denied the newspaper's Freedom of Information request July 15. He stated that the investigation file, which originally was delivered to him, had been passed to the Arkansas Prosecutor Coordinating Office.

Phillips has not responded to requests for information about the case in past weeks. He said Friday that the nonresponse was to protect the case.

"I will not, between now and when this case proceeds, issue any extrajudicial comments," Phillips said during the news conference. "It is inappropriate, and it's unethical. I will not try the case in the press. And ladies and gentlemen of the press probably won't like me for that because you have a job to do, and I do, too."