Cell service out throughout south Arkansas 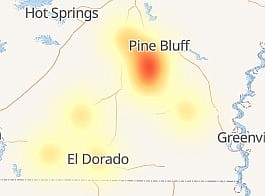 Cellular service was out for much of the day across Union County, as well as in other Arkansas counties, for customers of AT&T and Verizon.

According to an AT&T outage map, customers in and around the areas of El Dorado, Camden, Magnolia, Monticello, Pine Bluff, Sheridan and Rison were affected by service outages around 4:45 p.m. Sunday.

StraightTalk customers were also affected by the outage.

The News-Times reached out to AT&T and Verizon through social media, but did had not heard back by the time of this story's publication.

KATV reported Sunday afternoon that the outages were caused by “faulty equipment.” The outlet also reported that Jefferson County’s 911 service was down as a result of the outages.

El Dorado Fire Chief Chad Mosby said those with emergencies to report should use a landline phone to do so, or try Wi-fi calling.

This is a developing story. Check back for more information.

UPDATE 5:31 p.m.: An image circulated on social media that appeared to be of a message from the Verizon Facebook page to another Facebook user said a "network outage was detected" in Little Rock and was affecting people in the Eastern timezone. The message went on to say that resolution could take 12-14 hours, and the company recommends enabling WiFi calling.

UPDATE 6:01 p.m.: Service resumed in El Dorado for AT&T and Straighttalk customers. It's not confirmed whether service has resumed for Verizon customers.

If you have information about the outage, please email us at [email protected]