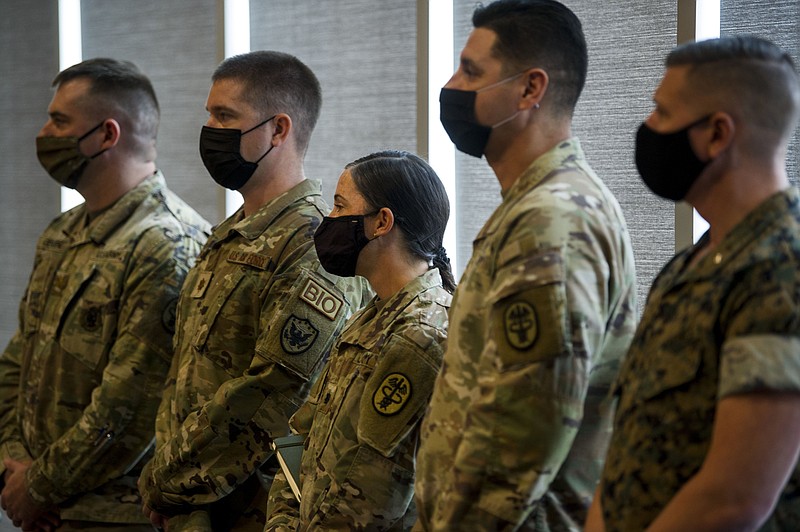 Members of a 20-person Army medical team, stand along side doctors and nurses from UAMS during a press conference on Monday, September 13, 2021. The team, which includes nurses, respiratory therapists and physicians, has deployed to the University of Arkansas for Medical Sciences for 30 days to provide much-needed assistance to hospital staff. Arkansas is one of three states to receive the military assistance at the request of FEMA, according to a press release. (Arkansas Democrat-Gazette/Stephen Swofford)

Maj. William Gehlen, an Army surgeon who is stationed at Fort Knox in Kentucky, said he and other military medical personnel spread across the country were put on notice about a potential deployment and, on Labor Day weekend, the order went out and their destination was revealed -- Little Rock.

"We had been preparing for the deployment order for a month, sort of in standby status," he said. "Then they told us we were being sent to Arkansas and off we went."

A 20-person Army medical team has been deployed to the University of Arkansas for Medical Sciences to provide assistance to hospital staff treating covid-19 patients. Arkansas, Alabama and Idaho each received a team at the request of the Federal Emergency Management Agency. The three teams are in addition to six teams already in place: three in Louisiana, two in Mississippi and another one in Alabama, according to a news release from U.S. Army North (Fifth Army) headquarters.

Lt. Col. Suzanne Cobleigh, Army medical officer in charge, said the unit's mission is to provide medical care in the area of each member's expertise. The team includes nurses, respiratory therapists and physicians.

"Our clinicians come from 14 different facilities across the nation, from Virginia to Alaska," she told the Arkansas Democrat-Gazette. "This unit has 20 clinicians and three command control staff."

"As far as the duration of our stay, it will depend on the situation on the ground. However, we will remain committed and willing to stay as long as needed," he said at a news conference held at the hospital.

Dr. Steppe Mette, CEO of the UAMS Medical Center, said he can't remember a time when the hospital needed assistance from Army personnel, but he is glad to receive it.

"We don't ask for help very often, but when we do, we are able to get help from the national government and that is wonderful," he said. "This will truly be beneficial to the people of Arkansas."

Because of the strain the pandemic has had on staff, Mette said the hospital system has had to turn down patient transfer requests from other medical facilities in the past couple of months. He said the Army assistance will help fill some of the gaps and allow the hospital to once again accept transferred patients.

"That is the biggest impact this will have and the other benefit is a boost in morale to our existing staff," Mette said.

Mette said having these professional, experienced military medical personnel working alongside the hospital's staff is an incredible opportunity for the hospital.

Gehlen said the unit members traveled separately to Arkansas, where most of them met for the first time.

"We basically took commercial transport and we are all staying in a hotel," he said. "We had an Army reception team meet us there to check in with us and give us some additional PPE [protective personal equipment]."

The experience of the team ranges from medical personnel who have been working in medicine for more than 10 years to some who are coming straight out of residency.

"It's the full gamut," Badillo said.

Cobleigh said all military personnel deployed to the hospital are vaccinated.

"The Department of Defense chose personnel who were vaccinated for these units," she said.

The hospital's nursing and physician staff have received the news of military assistance with gratitude and relief, said Dr. Michelle Krause, a professor in the Division of Nephrology in the UAMS College of Medicine Department of Internal Medicine

"They got to work this weekend and they got rave reviews and they are really working around our schedule," she said. "To get that degree of assistance is remarkable."

Krause said from a mental standpoint things were looking up this spring with the vaccine rollout and the drop in case numbers, but the recent surge in covid-19 cases has taken a toll.

"The challenge this summer was just the view that we all thought we had gotten through," she said.

Krause said military personnel will be placed in their specific area of expertise.

Not only are her teammates newly acquainted with each other, Cobleigh said, they are also learning their way around new territory.

"We are here to provide professional, heartfelt medical care and support UAMS in any capacity that is needed. We will approach it with open hearts and minds. I would say if anybody sees some out-of-state plates looking lost, just have some patience with us," she said with a laugh.