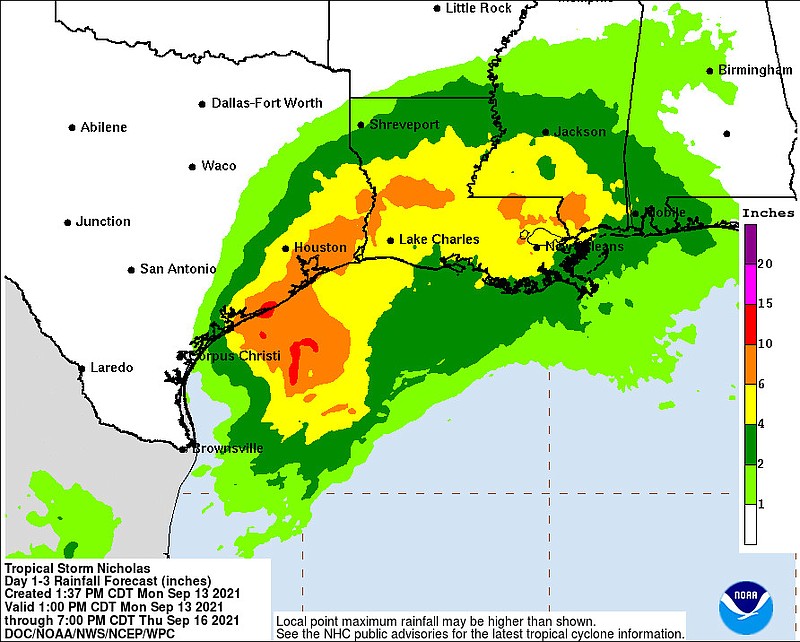 Tropical Storm Nicholas was due -- as of Monday afternoon -- to make landfall early this morning between Corpus Christi and Galveston, Texas.

The storm is expected to bring heavy rainfall to coastal areas in Texas and Louisiana.

Tropical storms have wind speeds from 39 to 73 miles per hour; Nicholas is projected to have wind speeds of 50 MPH upon making landfall that are expected to rapidly weaken as the storm moves inland.

Aaron Stevens, a forecaster with the National Weather Service in Shreveport, Louisiana, said Monday that regions where the storm will pass through days after landfall should expect rainfall.

"This system looks like it will take a while to get through... There is the potential for southern Arkansas to get some rain bands. On Tuesday, Thursday and even into Friday, there will be the opportunity to experience some tropical-type showers," Stevens said.

The NWS tracker shows Nicholas passing through southeastern Texas, including the Houston metro area, before moving further east into Louisiana. Thursday morning, the storm is projected to be on the western border of Mississippi.

Stevens said that he expects areas within the NWS Shreveport umbrella to receive rainfall from the storm varying in degrees from south to north.

A Monday afternoon National Weather Service public advisory warned about "heavy rainfall" in coastal Texas resulting from the storm. Nicholas is "expected to produce storm total rainfall of 8 to 16 inches, with isolated maximum amounts of 20 inches, across portions of the middle and upper Texas coastal areas through the middle of the week."

Southwestern Louisiana is, according to NWS rainfall projections, set to receive from six to 10 inches of rainfall from the storm while the southeastern portion of the state, including parishes still recovering from Hurricane Ida, could receive from two to six inches of rain.

The storm is expected to rapidly weaken into a tropical depression once it is on land; the same rainfall projections show far northern Louisiana and south-central and south-eastern Arkansas, including much of Union County, set for between one and two inches of rain later this week.