Still with me, says witness to crash in second tower 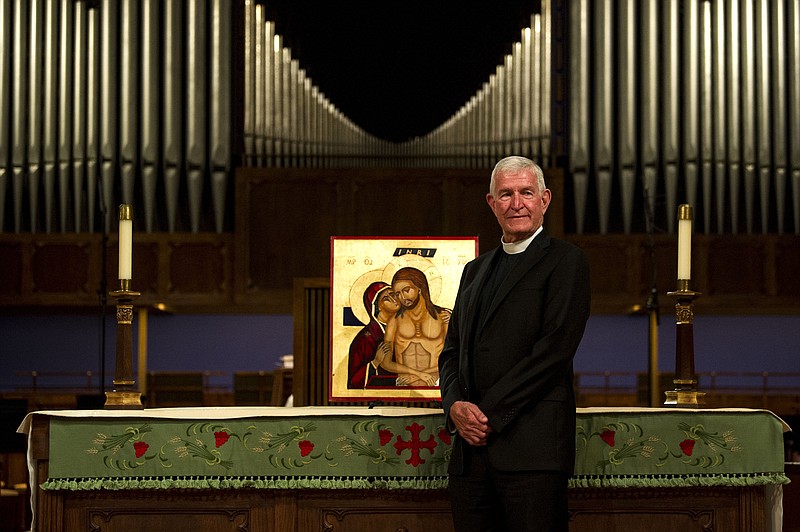 The Reverend Stuart Hoke, a priest with the Episcopal Church, stands for a portrait in St. Mark's Episcopal Church on Aug. 30, 2021.(Arkansas Democrat-Gazette/Stephen Swofford)

Still with me, says witness to crash in second tower

State native led services nearby as it began to fall

Twenty years after watching the World Trade Center fall, the Rev. Stuart Hoke will spend the anniversary of the attack at an Episcopal church in the New York City suburbs, mourning the dead, comforting survivors and sharing memories that remain vivid.

It's important, Hoke said, to be around other people on Sept. 11.

"I don't ever spend it alone," the Blytheville native said.

Hoke headed this week to Christ Church in Greenwich, Conn., home to a number of those who died. He spoke at a memorial service there on Saturday and was set to share more today.

Two decades after 2,753 died in the attacks on New York, early autumn remains a challenge for Hoke.

"I still have dreams, especially at this time of year, catastrophic dreams, about things happening," he said.

As the days begin to shorten and the summer heat recedes, "my body begins to tell me something's going on." "Every year I forget what it is, and then I say 'Oh, 9/11 is coming up.' And it's a bit of depression and just kind of melancholy and I'll tear up real easily. So it's still with me," he said.

Too stunned to move

Cameras were rolling on that crisp, clear, cloudless morning, capturing images that Hoke has shunned.

"I still won't watch those news clips," he said. "I don't want to see the plane hit the tower." These days, Hoke, 75, is the interim rector -- or priest in charge -- at St. Mark's Episcopal Church in Little Rock.

Two decades ago, he was executive assistant to the rector of Trinity Church Wall Street, one of the nation's oldest, wealthiest and most historic congregations.

On the morning of Sept. 11, he woke early, celebrated Mass at St. Michael's Episcopal Church on the Upper West Side and then took a subway into lower Manhattan.

The trip generally takes about a half hour.

"It was the first really Fall day, with bright blue skies and really cool air," he said.

At 8:46 a.m., Hoke was still a couple of stops from his office when Flight 11 hit the North Tower.

The subway operator, aware of trouble ahead, initially ordered everyone off the train at Chambers Street, one stop before Cortlandt Street and the World Trade Center exit. Moments later, as Hoke headed toward the doors, the operator instructed everyone to climb back in.

Racing under the inferno, the train made it, without stopping, to the Rector Street station and safety.

Emerging near Trinity Church, Hoke heard that "a small plane" had hit the building. He and a co-worker headed toward the World Trade Center complex, arriving as Flight 175 approached.

What happened next, Hoke saw with his own eyes, though his brain initially refused to believe it.

"That second plane out of the west, traveling at 586 miles per hour, hit the South Tower right above us. And the debris began to fall, a holocaust in the sky, the explosion, ear-splitting noise, and people still staring," Hoke said.

Someone asked aloud if they had stumbled upon a movie set. It seemed plausible, Hoke agreed. Even with fire and flame and death raining down, some people were too stunned, initially, to move, he recalled.

"We sort of waited for Bruce Willis to appear and save us," he said. "We just stood there." Disbelief, Hoke would later learn, is common when disaster strikes.

"I've read a lot about denial since then, refusing to acknowledge what in your heart you know to be true," he said.

Unlike Hoke, his co-worker accurately sized up the situation.

"My friend came up to me, and he grabbed me, and said: 'Stuart, run for your life!' And it dawned on me, I was in trouble, and I ran," Hoke said.

Fortunately, refuge was just around the corner.

The congregation, a fixture in Manhattan since 1696, was given 215 acres in 1705 by a generous benefactor, British monarch Queen Anne, and remains one of the city's largest landowners.

Tourists used to flock to the building, eager to climb its steeple; at 284-feet, the church was once the tallest building in New York.

On the morning of Sept. 11, 2001, the visitors were seeking shelter, serenity and solace in the sanctuary. But, with church leadership concentrated in a separate 25-story office building, the refugees had no one to lead them.

Aware of the problem, the head priest delegated the task to Hoke, dispatching an organist as well.

"I saw my boss. ... He said, 'Do something in there. Those people are coming in, they're running down Broadway. Run into the church and do something,'" Hoke recalled.

"So the organist and I ran into the church and extemporaneously, spontaneously, frightened out of our wits, we did a extemporaneous service of Scripture readings, prayers and hymns," he said.

Even with chaos raging outside, tradition inside wasn't entirely abandoned.

"When we ran into the church, like Anglicans, we put on vestments to go to the disaster. So I had on a black cassock and a white surplice," he said.

A hymn by Englishman Isaac Watts, written during Queen Anne's reign, provided assurance: "O God, our help in ages past, Our hope for years to come, Our shelter from the stormy blast, And our eternal home." At 9:59 a.m., as Hoke read from the Sermon on the Mount, the South Tower crumbled, and the air grew thick with smoke, dust and debris.

With the ground shaking and the lights knocked out, a worshipper cried out to Jesus. Others crawled beneath the pews, Hoke said.

Police officers arrived minutes later and urged everyone to flee, warning that the second tower might topple.

Hoke was helping to lead the parish day care's children to safety at 10:28 a.m. when it fell.

Uncertain of the outcome, he says he meditated that morning on a passage from the Book of Common Prayer: "O God, whose days are without end, and whose mercies cannot be numbered; Make us, we beseech thee, deeply sensible of the shortness and uncertainty of human life; and let thy Holy Spirit lead us in holiness and righteousness, all our days ..." "It was on my mind," he recalled. "I kept saying it over and over." Covered in ash and enveloped in smoke, they made it out of the Financial District. Hoke, like many others, rode the Staten Island Ferry to safety.

"You could see Manhattan burning as we crossed," he said.

After a night's respite, Hoke returned to the city, and soon was serving as a chaplain at St. Paul's Chapel, one of Trinity's properties.

Built in 1766, the oldest New York City public building in continuous use, President George Washington sometimes worshipped there, including on the day of his first inauguration.

Lightly attended prior to Sept. 11, the historic house of worship sheltered first responders as rescue and recovery efforts commenced following the attacks.

In the months that followed, Hoke says he saw God's handiwork manifest in service, sacrifice, generosity and grace.

"God is always a god of redemption, bringing good out of evil, light out of darkness, joy out of suffering and life out of death. And we saw it happen just on the spot," he said.

Hoke remained at Trinity Wall Street until his retirement there in 2008. Since then, he has continued in ministry, initially in North Carolina and now in his native state.

After serving as a priest associate at Trinity Cathedral in Little Rock, Hoke agreed to lead St. Mark's while it is between rectors.

Unlike some congregations he's led, where discord was evident, St. Mark's is on an upward trajectory, he said.

"It's a thriving parish," he said. "There's not any huge conflict; just daily skirmishes here and there." In Arkansas and elsewhere, people ask him to recount his 9/11 memories.

He doesn't turn them away.

How often has he told his story over the past two decades?

Sharing the memories doesn't heighten the pain; it binds the wounds.

"It helps. It always helps because I think there's such an element of redemption in this disaster," he said. "I mean, those people that came out in droves to help out the day of the disaster. All those parishioners, setting up barbecue pits [to feed first responders]. They brought port-a-potties, of all things. They were there." At age 75, "I'm very, very sensible to the shortness of life," he said, echoing the language from the prayer that sustained him on Sept. 11, 2001.

"I want to be deeply sensible and live life to the full, if I can," he said. "Part of that is working here [at St. Mark's Episcopal Church.] This is a good place." 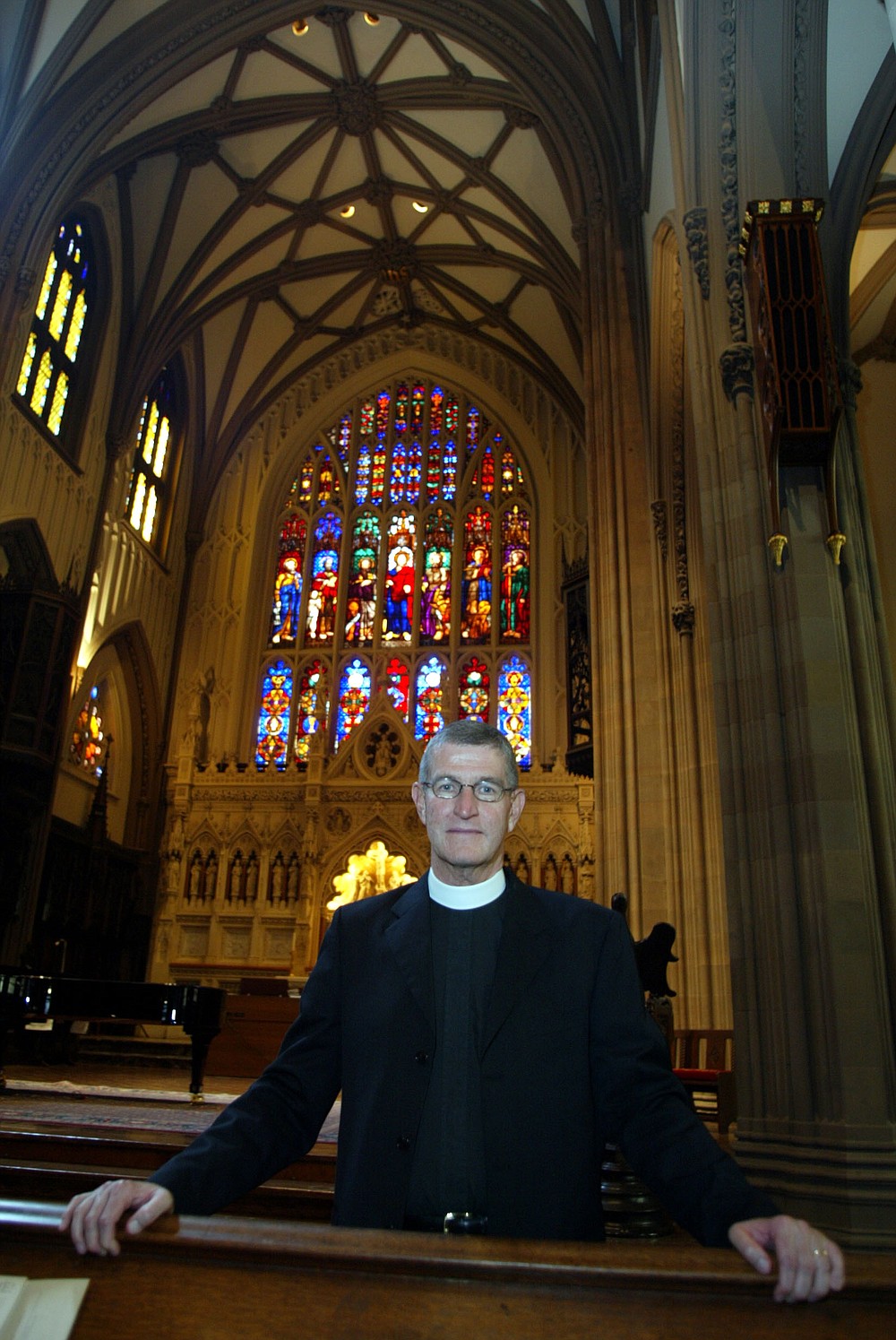 The Rev. Stuart Hoke, formerly of Blytheville, in Trinity Church in New York City in September, 2002. Hoke, then the executive assistant to the Rector of The Parish of Trinty Church of New York City, delivered a church service to those seeking refuge in Trinity Church, as the twin towers of the World Trade Center burned some 200 yards away. They were ordered to evacuate after the first tower collapsed. (Arkansas Democrat-Gazette/Rick McFarland)

Print Headline: Still with me, says witness to crash in second tower