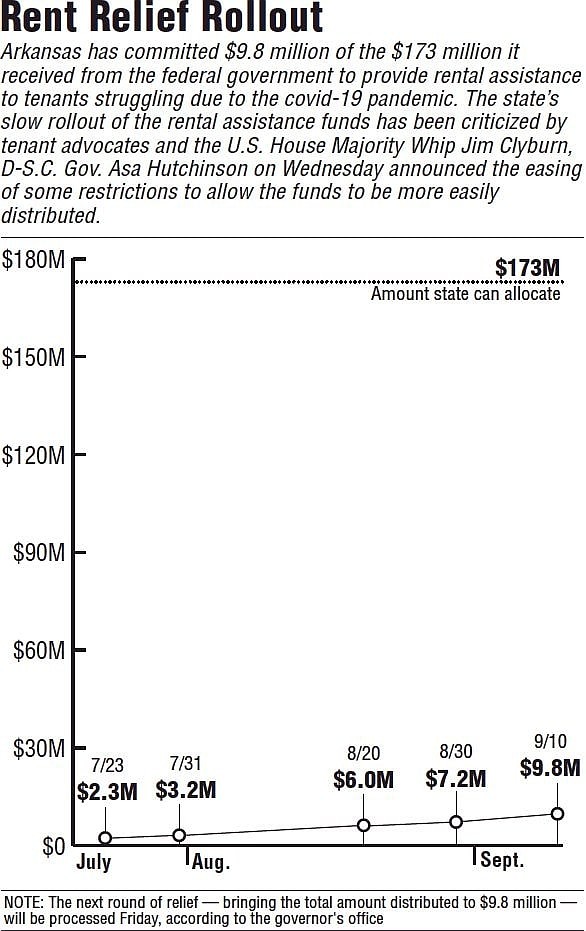 Arkansas has relaxed some of the requirements for its program to help tenants who are behind on rent because of the coronavirus pandemic, Gov. Asa Hutchinson announced Wednesday.

The state Department of Human Services received $173 million from the federal government at the beginning of 2021 to distribute to renters in need. The state started distributing funds in May, and by Friday, the program will have distributed $9.8 million, only 5.6% of the allocated funds, according to data Hutchinson presented at a news conference.

Landlords had been required to submit matching applications for tenants to receive assistance, but the state now will give money directly to tenants if their landlords do not respond within 10 days of a notification from the Department of Human Services, Hutchinson said.

The program also will prioritize applicants who have received eviction notices.

"We want to get these applications processed as quickly as possible, and I think this will help us to get that done," Hutchinson said.

The program covers past-due rent -- and up to 5% of late fees -- dating back to April 1, 2020. It also can cover missed utility payments and up to three months of future rent, according to the Department of Human Services.

Eligibility requirements, which are based on income and financial hardship related to the pandemic, can be found at ar.gov/rentrelief.

The state had been under pressure to process applications and distribute funds more quickly. Last week, U.S. Rep. James Clyburn, D-S.C., sent a letter to Hutchinson and four other governors of states that have been lagging in rental assistance distribution. By Aug. 30, the date of Clyburn's letter, the Department of Human Services had distributed $7.2 million to just more than 2,900 of the 13,720 households that had applied.

As of Wednesday, 15,139 applications had arrived, and 3,266 households will have received aid by Friday, according to state data. Meanwhile, 2,873 applications have been approved and are awaiting funds, and 97 have been denied.

The remaining 8,903 applications need more information. More than 6,000 of those are awaiting responses from landlords, but the applicants can now receive the money if their landlords do not respond.

The state has received 2,784 applications from tenants who have received eviction notices or court eviction papers, according to a Wednesday news release from the Department of Human Services.

Additionally, the contractor hired by the state to manage the program has added 70 more staff members "to handle calls, help process cases, and conduct reviews as part of program integrity," the release states.

In addition to pressure from Congress, 10 nonprofit organizations that advocate for tenants sent an open letter to Hutchinson and the Department of Human Services on Tuesday, urging them to loosen rental assistance requirements and distribute the funds more quickly.

Representatives from some of the nonprofits will meet with Department of Human Services officials next week to discuss further ways to streamline the rental assistance program, said Lynn Foster, president of Arkansans for Stronger Communities.

She said the changes Hutchinson announced Wednesday were "excellent."

"I would suggest more, I can suggest more, and I will be suggesting more to DHS either at or before our meeting next week," Foster said.

Neil Sealy, director of Arkansas Renters United, said he would prefer that tenants be able to apply for assistance on paper if they do not have internet access.

"We're getting better, but let's see what happens in practice," Sealy said about the changes to the program.

The U.S. Treasury Department is allowed to take back and reallocate some states' unused funds if they have not distributed 65% of their shares by Sept. 30. However, the department might not do so and has established Sept. 30 as a guideline instead of a hard deadline, a Treasury official told CBS News in August.

Clyburn gave Hutchinson a deadline of Tuesday to provide the House Select Subcommittee on the Coronavirus Crisis with information on how many staff members and contractors the rental assistance program has, how much federal money the state has dedicated to the program's administration and what actions the state has taken or could take to further reduce documentation requirements.

Hutchinson provided most of the information at his Aug. 31 media briefing and on Wednesday. He will formally respond to Clyburn later this week, Hutchinson's spokeswoman Shealyn Sowers said.

Arkansas' three most populous counties -- Pulaski, Benton and Washington -- each received and have been distributing their own rental assistance funds through the Consolidated Appropriations Act, which gave the state its $173 million.

Hutchinson said Wednesday that most of the state's money will remain unspent even if every application so far is approved.

"Our economy is moving, and people have opportunities to work. We want to provide this rental assistance, but that's a lot of money that is in the pot right now," Hutchinson said.

The rental assistance programs in Benton and Washington counties have distributed most of their funds, program coordinators told the Arkansas Democrat-Gazette last week. Pulaski County's program had distributed more than $3 million of its $11.7 million in federal funds as of Friday.

Mark White, the Department of Human Services chief of staff, said the state is "ready and willing" to provide its extra funds to the three counties with their own programs if they have more renters in need than funds to support them.