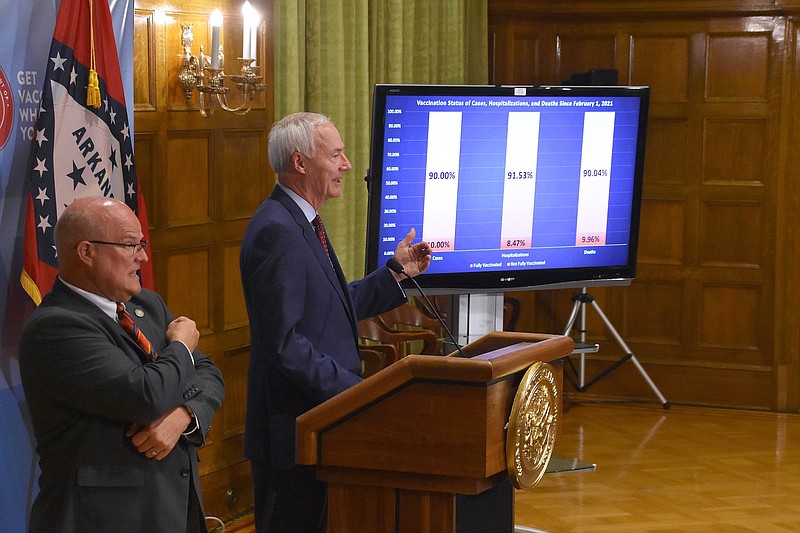 FILE — Gov. Asa Hutchinson talks about the percentage of vaccinated and unvaccinated covid-19 cases, hospitalizations and deaths during his weekly news conference at the state Capitol in Little Rock in this Sept. 8, 2021 file photo. (Arkansas Democrat-Gazette/Staci Vandagriff)

There were 123 COVID-19 cases identified in Union County between Sunday, Sept. 5, and Saturday, but with testing slowed, the seven-day positivity rate was nearly 24%.

On average, 18 new cases were identified each day last week in Union County, down from an average of 24 the week before

Two Union County residents died as a result of the virus last week.

Statewide, an average of 1,441 new cases were identified each day last week; in total, 10,090 new cases were found in Arkansas last week, down almost 4,000 from the week before.

However, 175 Arkansans' deaths that resulted from the virus were reported last week, up from the week before.

Last week, the Smackover-Norphlet School District joined the Strong-Huttig and El Dorado school districts in implementing a mask mandate for students, staff and faculty indefinitely due to COVID-19 cases and exposures. According to the Arkansas Department of Health, as of Thursday, Sept. 9, 18 cases had been identified in the district and seven were active Thursday. Superintendent Jason Black said at a school board meeting last Wednesday that 125 to 130 students were in quarantine due to exposure to the virus.

The Parkers Chapel School District has implemented a temporary mask mandate after a large number of students were forced into quarantine due to COVID exposures. There, 25 cases had been identified as of Sept. 9, including 10 that were active that day.

The El Dorado School Board will convene Monday, Sept. 13, for it s regular meeting, where the district's mask mandate will be reviewed. A total of 31 cases had been identified in the ESD by Thursday, including 13 that were active.

The Strong-Huttig School District, like the ESD, has had a mask mandate in place since school started. The SHSD was not included in the ADH's school cases report from Sept. 9; the report only includes districts where five more more cases are considered active.

In the Junction City School District, 21 cases had been identified by Sept. 9, including 12 that were active that day. According to the district's website, as of Sept. 10, 15 students and one staff member were also in quarantine due to COVID exposures.

The ADH is currently working to develop a "complex statistical model" to aid in understanding the role masks are playing in schools in mitigating the spread of the virus, said ADH Epidemiologist Dr. Mike Cima. Some of the factors that could be taken into account for the model are the rate of community spread within a school district's boundaries and the vaccination rate among residents in the district, Cima said.

"We're looking at the impact that masking policies have on the (COVID case) incidence rate among our students, faculty and staff," he said.

Johnny Key, secretary of the Arkansas Department of Education, noted on Wednesday that three school districts in the state have had to pivot to virtual instruction -- two made district-wide pivots and one moved an elementary school to online learning -- due to COVID outbreaks.

"What we are seeing in the districts, especially those districts that are having more challenges, are typically lower vaccination rates with the staff -- especially the staff," he said.

Enrollment numbers are about steady with last year's, Key said, with about 470,000 students enrolled in public school and an additional 24,000 registered as being home schooled.

"Our (COVID case) numbers, as have been reported by the Health Department, are higher this year than they were last year, which is to be expected with the delta variant; however, the number of interruptions has not been as frequent this year because of the vaccine being available now, and in many of our districts, we have a sizable percentage of staff that have been vaccinated," he said.

According to the Arkansas Centers for Health Improvement, cases had increased in several school districts' areas by Sept. 6, compared to the week before.

Since Aug. 1, as of Thursday, 1,438 COVID-19 cases had been identified in Arkansas schools, including 497 that were active that day, according to the ADH.

One local nursing home reported cases among residents and staff as of Sept. 6. According to the ADH, four residents and five workers at Timberlane Health and Rehabilitation had active cases of the virus that day; for both groups, their most recent positive test result returned on Sept. 2.

Timberlane has reported 79 resident cases and 53 worker cases since the pandemic began, and 11 residents have died as a result of COVID infections.

Statewide, 201 residents and 251 nursing home workers had active cases of the virus as of Sept. 6.

Gov. Asa Hutchinson announced last Wednesday that 20 military medical personnel employed at the United States Department of Defense would be travelling to Little Rock to assist with staffing needs at the University of Arkansas for Medical Sciences (UAMS).

"This consists of 14 nurses -- four of those are critical care --, four physicians and two respiratory therapists," Hutchinson said. "This is welcome assistance that will come and this will add to the staffing capacity at UAMS that will help us increase our capacity for managing both COVID and non-COVID emergencies and health needs that are out there."

"We are trying to get ahead of the curve -- if there is a curve that goes up; hopefully it goes down -- but we want to bring on new beds in September to meet any additional needs that will be out there," he said.

Alexandria Bennett, executive director of business development for Medical Center of South Arkansas, said eight patients were being treated for COVID-19 at the hospital as of Friday, including two in the ICU.

According to the ADH, 91.53% of Arkansans hospitalized due to COVID since Feb. 1, 2021, were not fully vaccinated, and 90.04% of those who have died as a result of the virus since then weren't fully vaccinated.

Vaccines are available locally by appointment at at Melvin's Discount Pharmacy, Walmart, Walgreens, both Brookshire's branches in El Dorado and the Union County Local Health Unit. To set a vaccination appointment at Melvin's, call 870-863-4155; for Walmart, visit walmart.com/COVID; for Walgreens, visit walgreens.com/findcare/vaccination/covid/19/landing; for Brookshire's, visit brookshires.com/covid-19-information; and for the Local Health Unit, call 1-800-985-6030.

Vaccines are free to all, and one does not need health insurance to get vaccinated.