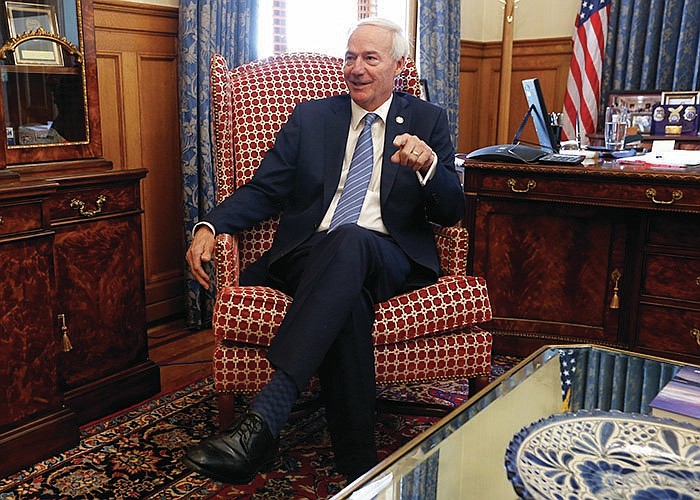 Gov. Asa Hutchinson talks about his time working for the Department of Homeland Security and his role after the Sept. 11 attacks during an interview on Wednesday, Sept. 1, 2021, at the state Capitol in Little Rock. (Arkansas Democrat-Gazette/Thomas Metthe)

In the nearly four years he spent in then-President George W. Bush's administration, Arkansas Gov. Asa Hutchinson had a hand in the United States' efforts to prevent terrorism in response to the 9/11 attacks.

Two decades later, the Republican governor reflected on his work in Washington, D.C., in the aftermath of the attacks, in an interview with the Arkansas Democrat-Gazette in his office on Sept. 1.

Under Bush, Hutchinson was administrator of the Drug Enforcement Administration from 2001 to 2003. In 2003, the president appointed him undersecretary of Homeland Security for Border and Transportation Security, a role he served in until 2005.

Hutchinson said the DEA changed immediately after Sept. 11, 2001. The administration shifted its resources, informants and agents "not to identify the next drug transaction but to get information on the next terrorist attack" and getting information to support the FBI as the agency changed its focus from prosecution to prevention.

Another initial task was restoring the nation's corps of air marshals, which had been depleted to fewer than a dozen, while working to bring back commercial flights.

"The White House asked us to recruit volunteers to be air marshals to get the planes back flying, so I asked, we sent our word to all of our agents, and by the end of the day I had 400 DEA agents volunteering to be air marshals. ... We're very proud of the fact that they wanted DEA because we were the best shots," Hutchinson said with a laugh.

On the Sunday after the attacks, then-Attorney General John Ashcroft called an emergency meeting of U.S. Department of Justice leadership in the fourth-floor command center.

"It was a little bit of a moment of drama, he looked at us and he said, 'The president of the United States just tapped me on the shoulder and said, John, do not let this ever happen to America again,' and he says, 'I called you in because I wanted to share this with you, if anybody can't measure up, I want you to resign right now,'" Hutchinson recalled.

Hutchinson said he worked with then-Secretary of Defense Donald Rumsfeld to present a joint strategy of the U.S.' CIA and defense operatives in Afghanistan that was in conjunction with the agency's anti-drug mission. He said opium production fueled the Taliban at the beginning.

With the Homeland Security Act of 2002, Congress created the U.S. Department of Homeland Security in response to the Sept. 11 attacks with the mission of reducing the vulnerability of the United States to terrorism, according to the law.

In his role, Hutchinson was responsible for protecting the borders and transportation systems of the United States from a terrorist attack.

In describing what it was like to come in on the ground floor of a brand new agency, Hutchinson invoked something then-Secretary Tom Ridge would say: "It was like building a plane at the same time you're getting shot at." "You just kind of build a new system, a new department of government, but you're action-oriented," Hutchinson said.

Hutchinson said that while policy changes with each administration, the fundamental strategy implemented when the department was formed remains in place.

"The strategy we developed from the beginning was using technology, partnering with the private sector because the government can't do it all and balancing the flow of commerce with the protection of civil liberties," he said.

But he said President Joe Biden's recent withdrawal of U.S. troops from Afghanistan will make it more challenging to carry out the department's mission.

In a tweet on Aug. 16, Hutchinson said that Biden needed to "do more than defend his decision to leave Afghanistan." "America has a responsibility here and we need to hear a plan to rescue lives and mitigate the disaster," he wrote.

The governor noted that it had been a long time since he'd had that level of intelligence, but said he believed the withdrawal was handled poorly and the U.S. needed a plan to have strength in that region of the world.

In his Aug. 31 remarks about ending the war, Biden said the U.S. "no longer had a clear purpose in an open-ended mission in Afghanistan." He also said more than 120,000 people were initially evacuated to safety from Kabul, the capital, more than double what most experts thought was possible.

Hutchinson is far from the only politician to criticize Biden's approach in Afghanistan. He is also one of several governors to express willingness to accept Afghan refugees who helped the U.S. into their states.

He said he thought welcoming Vietnamese refugees into the country, and particularly in Fort Smith where he used to live, after the fall of Saigon during the Vietnam war, "was a good moment for America." "We cannot abandon them," he said. "We've got to do our part." 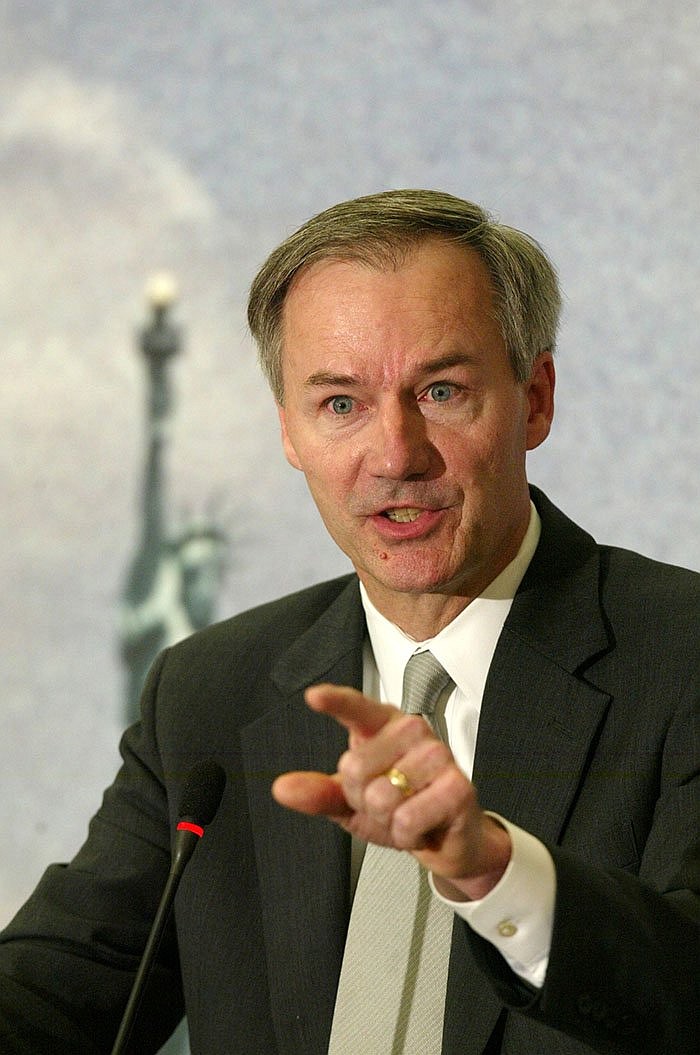 Then-Homeland Security Undersecretary Asa Hutchinson gestures during a news conference at the Center for Strategic & International Studies (CSIS) in Washington Monday, May 19, 2003, where he released details of the U.S. Visitor and Immigration Status Indication Technology, (US Visit) program that was to track the comings and goings of tourists, students and business travelers from foreign countries. (AP Photo/Rick Bowmer)