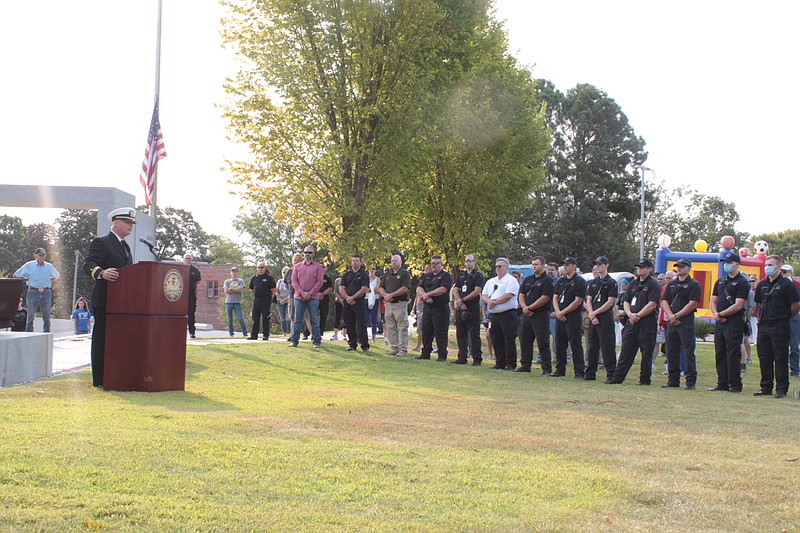 Sterling Claypoole speaks at a memorial ceremony commemorating the lives lost on Sept. 11, 2001, as El Dorado Firefighters look on. The ceremony was held Saturday at the Arkansas 9/11 Memorial, which is housed at the El Dorado Conference Center. (Caitlan Butler/News-Times)

Twenty years ago, the nation was still reeling from the events of the day prior, when three hijacked commercial airplanes were purposefully crashed into the twin towers that comprised the World Trade Center and the Pentagon, killing nearly 3,000 people.

A fourth plane assumed to be heading for Washington D.C. crashed in a field in Pennsylvania, the hijackers thwarted by the plane's passengers.

On Saturday, Sterling Claypoole led a ceremony at the Arkansas 9/11 Memorial, which includes a 699 pound piece of a steel beam salvaged from the rubble of the World Trade Center's Tower One, a structure engraved with the names of four Arkansans who were killed in the Sept. 11 attacks and a flag that was being flown at half staff.

Sterling explained that starting from the flagpole, the memorial represents a timeline of the events of Sept. 11, 2001. The steel beam is one of five artefacts recovered from the World Trade Center in Arkansas.

The memorial was placed at South Arkansas Community College in 2011, two years after Claypoole and former Mayor Mike Dumas began working to have it sited in El Dorado. Claypoole, Britt Galbraith, Tom Wilson and Michael Nolan travelled to New York City in March, 2011 to retrieve the steel beam.

"From March to September that year, we took it to schools to allow children to see history -- to touch it," Claypoole said.

Standing in a line, El Dorado Firefighters were somber throughout the event. EFD Capt. Justin Tolin placed a memorial wreath honoring the firefighters and first responders who died on Sept. 11, and wreaths for police and civilians were subsequently placed at the 9/11 Memorial.

"Let the memory of those who ran to help be the legacy of that day," was a prayer heard Saturday.

The Arkansas Association of Chiefs of the Police Honor Guard were also present at the memorial event; members fired a three-volley salute, which was followed by the playing of "Taps."

Claypoole said that for him, the twisted steel of Tower One, the firefighters gathered around the memorial and the memories of that day that live on in Americans represent victory.

"Always remember. Never forget. Remember those that have given everything," he said. "I see this as a victory. The 3,000 men, women and family members that lost their lives that day ... they are victorious because of this steel. Victory is ours because we are the human spirit that brings victory out of chaos, human loss and sacrifice."

Later Saturday morning, firefighters and other local residents could be found at the Union County Courthouse, where they participated in the El Dorado 9/11 Memorial Stair Climb.

Participants, some of whom dressed out in full firefighter gear, were set to climb the Courthouse's three flights of stairs a number of times in order to recreate the 1,980 steps in the 110 flights of stairs at the World Trade Center.

Debbie Lewis, administrative assistant for the EFD, said about 30 people had signed up by 11:15 a.m., and all told, 41 people ended up participating in the Stair Climb.

EFD Asst. Chief Bruce Goff watched as his fellow firefighters climbed the stairs. The 29-year veteran of the fire department recalled that he was leaving EFD Station #2 on the morning of Sept. 11, 2001, headed to his son's school to give a demonstration; he listened to live radio reports from hosts Danny T and Bud, and that evening, sat down with his son's PeeWee football team to try to explain what had happened.

"I think it's a good tradition for them to be able to remember 9/11. Most of these guys ... in full gear were young kids when this happened. I'm glad to see they're trying to pay tribute to their brother firefighters," Goff said.

Those who participated in the Stair Climb had the opportunity to represent a first responder that died as a result of the attacks by wearing a badge with their name and photo. Lewis said earlier this week that the Rev. Robert Wetherington, for example, selected the badge of New York City Fire Department Chaplain Mychal Judge, who reportedly became the first certified casualty of the 9/11 attack.

"We do this every day and don't think about it, but when you see it at that scale, it pulls your heartstrings," Goff said.

By about 2:45 p.m. Saturday, the Stair Climb had wrapped up. Lewis said she thinks it was a fitting memorial.

"I'm blown away with the support that was shown," she said. "El Dorado is amazing."