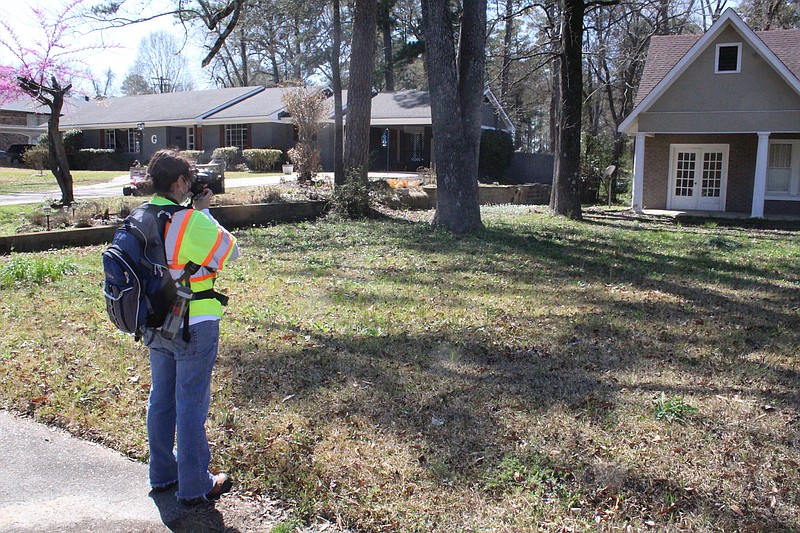 A surveyor for Terracon Consultant Services, Inc. examines properties near Mellor park for a Determination of Eligibility for the National Register of Historic Places in this News-Times file photo.

Elizabeth Eggleston, executive director of the EHDC, also clarified and provided additional details about amendments that have been made to the terms of a state grant that will be used to cover the cost of the project.

The EHDC and the Austin, Texas, office of Terracon Consultant Services, Inc., are working to wrap up a Determination of Eligibility (DOE) survey and inventory for 326 properties in the Mellor, McKinney, Bodenhamer, Forest Lawn and Eastridge subdivisions.

The survey and inventory will help to determine if the subdivisions are eligible for a nomination to the National Register for Historic Places as local historic districts and/or individually listed properties.

The work has been ongoing since March and Eggleston said Thursday that the field work is nearly complete.

The project is being funded by the largest portion -- $42,500 -- of a $49,049, Certified Local Government (CLG) grant that was awarded to the city in 2019 by the Arkansas Historic Preservation Program (AHPP).

It is the largest CLG grant to ever be awarded in the state.

El Dorado is one of 21 cities in Arkansas to participate in the CLG program.

CLGs partner with the other CLG communities around the state, the AHPP and the National Parks Service to preserve historic resources at the local level.

In 2020, the city was awarded another CLG grant for a DOE survey of the Retta Brown and Country Club Colony neighborhoods -- both of which were recommended as projects in a citywide preservation plan that was drafted in 2020.

Eggleston said last month that requests for proposals (RFPs) had been sent to firms to conduct the DOE surveys and she had received some inquiries about the project.

Aug. 22 was the deadline to submit RFPs.

In an update last week, Eggleston notified historic commissioners that she did not receive any proposals by the deadline and she sought guidance from the AHPP.

Eggleston said she had also checked with an Austin-based preservation/design firm, who said it was unable to take on the project and recommended Cox|McLain Environmental Consulting, Inc.

Cox|McClain is reportedly conducting a DOE survey and collecting oral histories for projects in Little Rock.

"(Cox|McClain) said they could not conduct the survey based on the amounts that had been suggested by the AHPP," Eggleston told historic district commissioners, explaining that the firm uses FileMaker by Apple, a cross-platform relational database application.

She said the details, including the costs, of the contract had been negotiated and incorporated into a preliminary agreement that was to be reviewed by the EHDC and AHPP.

The AHPP revised the terms of the grant, agreeing to pay $15,932, per a request from Cox|McClain, to cover the DOE survey for Country Club Colony.

State officials have also suggested that the EHDC resubmit the Retta Brown project for the next CLG grant cycle.

Eggleston explained Thursday that the amount of the CLG grant had not been reduced, as was previously reported by the News-Times.

She said the AHPP agreed to reallocate more funding for the DOE survey for Country Club Colony (Task A) and that the Retta Brown survey (Task B) would be eliminated from the terms of the $22,648 grant.

She said the remainder of the grant will be divided among administrative services, including pay for the executive director, for the EHDC ($4,000); more than $2,300 for travel and training for EHDC staff and commissioners; and $300 for annual membership fees to local, state and national preservation programs (the South Arkansas Historical Preservation Society, Preserve Arkansas and the National Alliance of Historic Preservation Commissions).

Eggleston said she has also spoken with state officials and Cox|McClain about the Retta Brown project, saying that if the EHDC can come up with the $9,660, the firm could complete both projects simultaneously.

Eggleston noted that the El Dorado Works Board and El Dorado City Council agreed to provide a $10,000 match for a $42,000 grant that was awarded in 2019 to pay for the the citywide preservation survey.

The matching funds came from the El Dorado Works tax, a one-cent city sales tax that is designated for economic development, municipal infrastructure and quality-of-life projects that are recommended to and vetted by the EWB.

Sara Coffman, a member of the EHDC and EWB, advised Eggleston to put together a proposal to present to the EWB and request that the item be placed on the agenda for the EWB's next regular meeting, which is scheduled for 5:15 p.m. Tuesday in the Council Chamber of City Hall.

"(The cost for the Retta Brown survey) may change because this is what the state designated for the (Retta Brown) project. We've increased the per-structure amount so there is probably going to be an increase," Eggleston said, adding that she will check with Cox|McClain about the matter.

She also said research has already been done and maps developed for the properties that will be surveyed in the Retta Brown neighborhood, including the former elementary school of the same name.

Eggleston said she would try to prepare a proposal for the EWB by Tuesday.