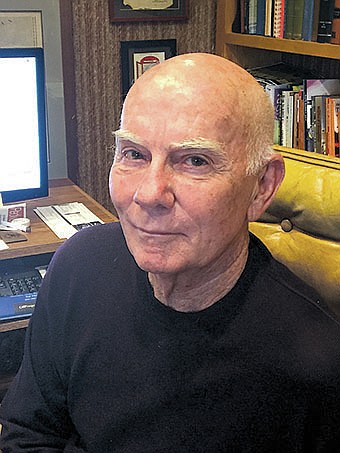 It seems almost everyone has a pet of some kind, and they vary with the individual's taste.

From the time I was six years old, several dogs were always around and under our house, and they were varied. Of course we had cats, but they were barn cats, and they earned their keep by holding down the rat population.

Some dogs stand out, and I remember several, but probably one better than all the others.

When I was about 12 years old, one Friday afternoon, Mr. Benton drove up in his old pickup truck with a skinny, brown hound in the back open truck bed. I was raking the front yard and daddy walked out about the time Mr. Benton pulled up. I couldn't help but notice the hound.

Daddy and I walked over to Mr. Benton's truck, said hello, and then Mr. Benton pointed back to the back of his truck, and said, "Jack, I'm a-getting too old for huntin', and I am gonna get rid of my old hound. Y'all want this dog? It'll tree most anything."

I walked up to the hound in the back of Mr. Benton's pickup truck, and the hound came over and licked my hand while I petted it.

"Let me have it, Daddy. I promise to take care of it," I begged.

Daddy started talking with Mr. Benton, and I knew with a nod that I had a hunting dog.

Shoot, I couldn't wait to take the dog out hunting. I named the hound Browne, but after taking it in the woods, I changed its name to Sniffer, because the dog was almost constantly sniffing.

Sniffer was my dog until I graduated from high school. I featured the dog's name in several of my books. "Sniffer, the Hero Dog of Norphlet" is available on Amazon, and it's fiction.

Mark Twain was asked if his "Huckleberry Finn" and "Tom Sawyer" books were based on real life experiences and he said, "Well, these stories are about things that could have happened to boys in the South." Yes, that fits the Sniffer story.

Along the way, when I was 12-14, I had a pet possum. I had picked it up beside the road after its mother was run over. I couldn't house break the possum, so it had to live outside and finally it ran off with another possum.

I tamed a big red-tail hawk, which I'd caught in a steel trap, and it would fly across the yard and land on my arm. I was training it to hunt, but when I finally understood the hunting eagles in Afghanistan hunted in the desert, I encouraged it to fly off.

After Sniffer died of old age, I didn't have a dog from until I was out of college and working in south Texas, when a good friend in Corpus Christi gave us a female Dalmatian, and a year later, she gave birth to 11 puppies. The day she gave birth it snowed in Corpus Christi, and we had to bring 11 puppies inside, and we ended up with a bathtub full of mother and puppies. We liked to have never got rid of all those puppies.

While Lara, our daughter, lived in Santa Fe, she visited the dog pound, and was told two dogs there were going to be put down that day, so she sent them to us. Not the best present I have ever received, but I will say this: the big red-haired dog was an excellent guard dog. If a car it didn't recognize came down the driveway, it would bite the tires, and, if it were our guests, I would have to go out and escort them in.

Our last dog was probably the best dog ever. Mollie was a mixed female lab that someone dumped out in front our house, and it was such a friendly dog that we adopted it. It refused to come into the house and our grandkids loved it because when they visited, Mollie would come to the kitchen door with a tennis ball, and all they had to do was throw it out the

We had a deaf, white kitten for a couple of months, when our kids were six and eight, and one morning I jumped in the car to take the kids to school and the deaf kitten was under the car. Yes, I ran over the kitten with the kids in the car, and it was an upsetting experience, to put it mildly. I put the kitten in a shoe box and that afternoon, we had the funeral.

However, over the years we have slowly added some rather unusual pets, and as I write this, our small pond in the front yard contains an estimated 35 koi. About twenty years ago, we bought abound 10 small koi, and when our kids went off to college, we shut down our swimming pool, and made it into a large koi pond. It actually worked fine, except with the dark water you couldn't see how many fish we had.

After about five years, we decided we wanted our pool again, and decided to revert it back. When we pumped it down, I was amazed at the number of large koi. We had at least 35, and when we put them in the front pond, it seemed to be exactly what we wanted. The water was clear, and when we fed them it was a sight to see.

However, the crowded situation turned out to be a problem, because first we had a couple die, which I assumed was from a bacterial infection, and then we had a wholesale dying off of the koi. We got down to two koi, and for several years we had only two fish in the pond. Then one died, and we decided the lonely large ten pound koi needed company so we bought ten four inch ones, and over the next five years only one died, and then we noticed several smaller ones of different sizes.

A big blue heron grabbed two of the original ten before we set up a sound system to run them off, and then the old original koi from the first batch of fish, which was at least 25 years old, died.

We still had seven koi which were getting bigger and today weight around two pounds each. However, over the past year, we started noticing a variety of small koi and a school of ten to fifteen solid black fish.

We now have koi of all sizes, from two inches to one and two pounders, and we have a school of black fish, which are growing like weeds. I don't think the black fish are koi, but how they got there and what they are is a mystery.

As a little sidebar: this past February, the pond seemed to be solid ice with eight inches of snow on top of the ice, and I thought it was curtains for the fish, but I didn't lose a one.

Print Headline: Pets are us