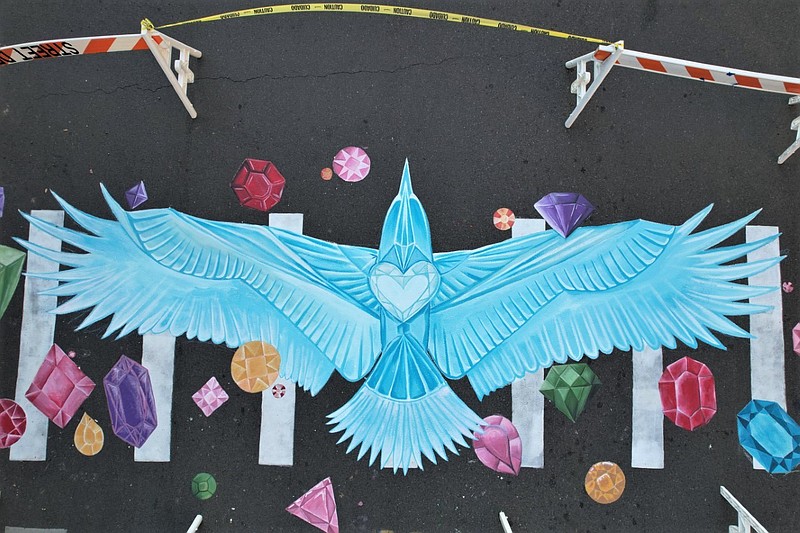 Downtown El Dorado has a new addition with the second of two crosswalk murals. The mural is part of a Main Street El Dorado public art project that got underway in September. The newest mural was completed earlier this week at the intersection of Jefferson and Elm streets. Main Street has also installed ambient sound in Downtown El Dorado. (Contributed)

Main Street El Dorado is moving full steam ahead on two long-running projects that are intended to enhance the Downtown El Dorado experience.

However, MSE has exhausted its budget for one of the projects and is looking for sponsors to continue it this year.

MSE had been looking to install an ambient sound system and launch a crosswalk art project downtown for about three years.

MSE's goal is to add murals to other crosswalks within the Union Square District.

Crosswalk art is a popular trend in urban landscape design and traffic/pedestrian safety in cities across the world.

In 2018, MSE began discussing the trend as another way to enhance the city's award-winning downtown, with Beth Brumley, MSE executive director, saying the crosswalk murals provide visitors with photo opportunities when downtown streets are blocked for outdoor events.

During an MSE board meeting Tuesday, Brumley explained that the artists come up with the designs and the MSE Design Committee reviews and approves the proposals.

"We have the possibility of doing more but we are tapped out of our budget this year," Brumley said.

Brumley said MSE could look into the possibility of adding sponsors' names to the artwork, noting that the artists are expected to touch up the existing murals in time for Airstreams on the Square, which is set for Oct. 21 - 24.

"They're supposed to add the Main Street logo to the ones that we paid for," Brumley said.

Any individuals, families, groups or businesses who are interested in sponsoring one of the crosswalk projects may call the MSE office at 870-862-4747, send an email to [email protected] or visit the MSE Facebook page.

Johnathan Estes, manager of South Arkansas Regional Airport at Goodwin Field, met with the artists as they worked last weekend on the mural at Jefferson and Elm.

Estes used a drone to capture aerial shots of the mural and said he feels the crosswalk art is a great addition to downtown.

And so do other people, judging by the feedback Estes said the artists received from passers-by.

"I hope to see more of these artworks sponsored and completed around the city. These artists worked for nearly nine hours on hot asphalt creating this one beautiful design," Estes said.

"Throughout the day, a good number of people walked or drove by complimenting the art and skills of the artists that had been hired by Main Street El Dorado," continued Estes, who often uses his drone to capture scenes in Downtown El Dorado and other parts of the city.

Brumley said she delighted Monday in watching the reactions of downtown visitors as crews worked to install the new ambient sound system downtown.

The project had also been under discussion by MSE since 2018.

Tax revenue is administered by the EWB, who vets projects that are proposed for funding and recommends the requests it approves to the city council for a final vote.

Brumley previously explained that funding from the El Dorado Works tax will cover the costs for a laptop computer, speakers, mounting equipment and labor to install the sound system.

MSE is kicking in $10,000 to take care of monthly Internet and licensing fees.

Brumley previously said that funding from the city for the sound system and other financial contributions helped MSE free up money for the crosswalk art project.

"Most of you noticed the ambient sound when you came in," Brumley told board members Tuesday. "It was exciting to be on the street yesterday, seeing people's faces when they turned it on. They were looking around, like, 'Where is that music coming from?'"

A few downtown businesses, however, were not happy about the sound at first; but Brumley explained crews had to test out the system and adjust the volume after the initial start-up.

"It was really loud when they turned it on," she said with a laugh.

The sound system plays music and captures the sounds of activities on the downtown square, particularly in retail-heavy areas along Main Street between Cleveland and Hill avenues and Washington Avenue between Oak and Cedar streets.

Brumley said the final piece of equipment, a mobile master, is expected to arrive next week.

The mobile master will allow for announcements to be made over the sound system, Brumley said.

For instance, if an activity is about to begin during a downtown event, the announcement will reach listeners throughout the Union Square District.

Brumley and other board members have said that people in other parts of the district sometimes do not realize that "something's going on downtown."

Now, visitors who may be a block off the square can be kept abreast of activities that are underway in the heart of downtown -- the area immediately surrounding the Union County Courthouse.