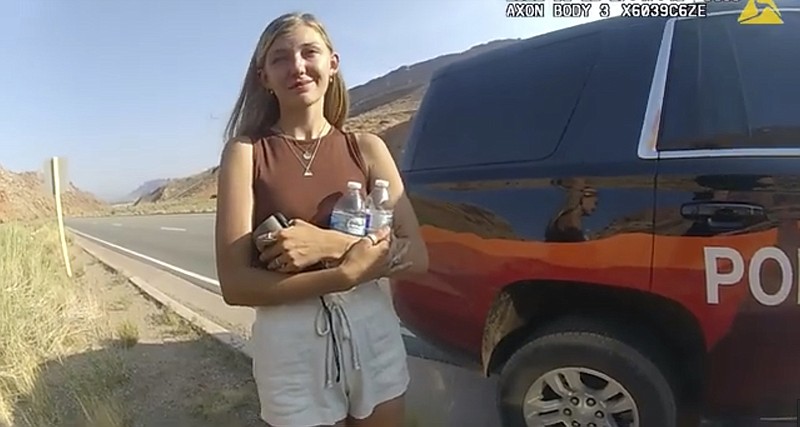 FILE - This police camera video provided by The Moab Police Department shows Gabrielle &quot;Gabby&quot; Petito talking to a police officer after police pulled over the van she was traveling in with her boyfriend, Brian Laundrie, near the entrance to Arches National Park on Aug. 12, 2021. Teton County Coroner Brent Blue is scheduled to announce the findings of Petito's autopsy at a news conference early Tuesday, Oct. 12. (The Moab Police Department via AP)

Petito, 22, died three to four weeks before her body was found Sept. 19 near an undeveloped camping area along the border of Grand Teton National Park in remote northern Wyoming, Teton County Coroner Dr. Brent Blue said in a news conference.

It wasn't clear if the determination might lead to additional charges against Petito's boyfriend and traveling partner, Brian Laundrie, who is considered a person of interest in her disappearance and remains unaccounted for.

Blue declined to say more about the autopsy or the case overall, saying he was prevented by Wyoming law that limits what coroners can release.

Petito had been on a cross-country trip with Laundrie, visiting Colorado, Utah and other states. She was reported missing Sept. 11 by her parents after she did not respond to calls and texts for several days while the couple visited national parks in the West.

Blue previously classified Petito's death as a homicide -- meaning her death was caused by another person -- but had not disclosed how she was killed pending further autopsy results.

A "detailed analysis" led to his conclusion Petito was strangled, Blue said.

"Nothing is obvious in a case like this," he said.

Blue said little more about Petito's physical condition -- including whether she may have been strangled directly by somebody's hands, a rope or some other item -- but noted when asked she wasn't pregnant.

The three to four weeks her body was believed to be in the wilderness, however, put her death around the Aug. 27-30 period investigators believe Petito and Laundrie had traveled to the area.