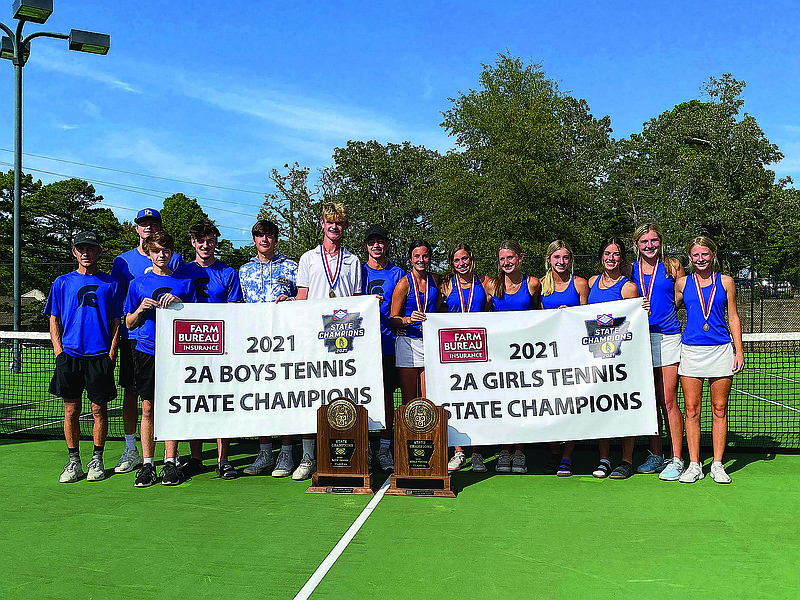 Parkers Chapel made it a clean sweep Tuesday, winning both the 2A Boys and 2A Girls Tennis State Championships at the Fairfield Bay Tennis Center. It was the second state championship in a row for the Lady Trojans.

FAIRFIELD BAY - Parkers Chapel enjoyed its stay at Fairfield Bay, winning both the boys’ and girls’ 2A State Tennis Championships Tuesday at the Fairfield Bay Tennis Center. The Lady Trojans won the title for the second straight year.

“It’s my first time having both teams win it at the same time,” said PC coach Casey Rapp. “It’s an incredible feeling. I’m happy to share the experience with these great kids.”

“I think it was a big deal for them to win it back-to-back. They put in a lot of hard work this year. They were excited to see themselves win,” said Rapp, who talked about the stress of watching both PC teams competing for the championship.

“I just tried to look at it as, either way, Parkers Chapel is still winning as a team. So, in the end, no matter if one team lost, we all still won.”

While PC’s girls were dominant, the Trojans’ championship was nip-and-tuck all the way to the final doubles match.

“I was hoping going in that we had the ability to win state. I thought we could pull it off. I knew it was going to be a hard battle but they pulled it off,” said Rapp.

Dison was the only Trojan to advance to the second day of play.

“He played amazing. He finished the finals with 6-0, 6-0,” said Rapp of Dison’s win over Maumelle Charter’s Ben Conklin in the championship match.

Spencer Frisby and Brody Goodwin won their first round doubles’ match 6-4, 6-2, which helped the Trojans lift the championship trophy.

“It’s always important for everyone to get a win when they can. I considered it very important,” said Rapp, who said he’s happy to see the season end on such a positive note.

“It’s been stressful but rewarding watching them play and having such good results. Now, I’m ready to rest.”

After being reminded of the Overall Tournament, he added, “Oh yeah, we have the Overall. Forgot about that. Well, after the Overall, I’ll rest.”