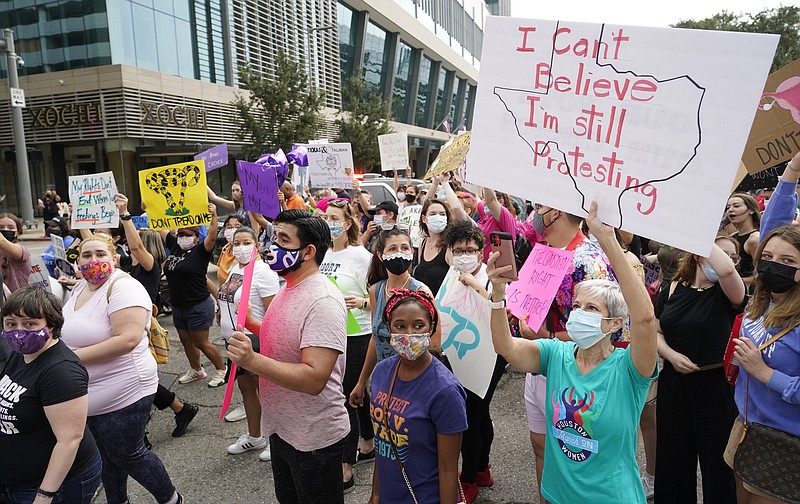 AUSTIN, Texas (AP) -- Texas clinics on Saturday canceled appointments they had booked during a 48-hour reprieve from the most restrictive abortion law in the U.S., which was back in effect as weary providers again turn their sights to the Supreme Court.

The Biden administration, which sued Texas over the law known as Senate Bill 8, has yet to say whether it will go that route after a federal appeals court reinstated the law late Friday.

The latest twist came just two days after a lower court in Austin suspended the law, which bans abortions once cardiac activity is detected, usually around six weeks, before some women know they are pregnant. It makes no exceptions in cases of rape or incest.

For now at least, the law is in the hands of the 5th U.S. Circuit Court of Appeals, which allowed the restrictions to resume pending further arguments. In the meantime, Texas abortions providers and patients are right back to where they've been for most of the last six weeks.

Out-of-state clinics already inundated with Texas patients seeking abortions were again the closest option for many women. Providers say others are being forced to carry pregnancies to term, or waiting in hopes courts will strike down the law that took effect Sept. 1.

There are also new questions -- including whether anti- abortion advocates will try punishing Texas physicians who performed abortions during the brief window the law was paused from late Wednesday to late Friday. Texas leaves enforcement solely in the hands of private citizens who can collect $10,000 or more in damages if they successfully sue abortion providers who flout the restrictions.

Although some Texas clinics said they had briefly resumed abortions on patients who were beyond six weeks, Seago said his group had no lawsuits in the works. He said the clinics' public statements did not "match up with what we saw on the ground," which he said include a network of observers and crisis pregnancy centers.

"I don't have any credible evidence at the moment of litigation that we would bring forward," Seago said Saturday.

Texas had roughly two dozen abortion clinics before the law took effect. At least six clinics resumed performing abortions after six weeks of pregnancy during the reprieve, according to the Center for Reproductive Rights.

At Whole Woman's Health, which has four abortion clinics in Texas, president and CEO Amy Hagstrom Miller said she did not have the number of abortions her locations performed for patients beyond six weeks but put it at "quite a few."

She said her clinics were again complying with the law and acknowledged the risks her physicians and staff had taken.

"Of course we are all worried," she said. "But we also feel a deep commitment to providing abortion care when it is legal to do so, we did."

Pitman, the federal judge who halted the Texas law Wednesday in a blistering 113-page opinion, was appointed by President Barack Obama. He called the law an "offensive deprivation" of the constitutional right to an abortion, but his ruling was swiftly set aside -- at least for now -- in a one-page order by the 5th Circuit on Friday night.

That same appeals court previously allowed the Texas restrictions to take effect in September, in a separate lawsuit brought by abortion providers. This time, the court gave the Justice Department until 5 p.m. Tuesday to respond.

What happens after that is unclear, including how soon the appeals court will act or whether they will request more arguments. Texas is asking the appeals court for a permanent injunction that would allow the law to stand while the case plays out.

In the meantime, Nancy Northup, president of the Center for Reproductive Rights, urged the Supreme Court to "step in and stop this madness."

Last month, the high court allowed the law to move forward in a 5-4 decision, although it did so without ruling on the law's constitutionality.

A 1992 decision by the Supreme Court prevented states from banning abortion before viability, the point at which a fetus can survive outside the womb, around 24 weeks of pregnancy. But Texas' version has outmaneuvered courts due to its novel enforcement mechanism that leaves enforcement to private citizens and not prosecutors, which critics said amounts to a bounty.

The Biden administration could bring the case back to the Supreme Court and ask it to quickly restore Pitman's order, although it is unclear whether they will do so.

"I'm not very optimistic about what could happen at the Supreme Court," said Carl Tobias, a law professor at the University of Richmond, about the Justice Department's chances.

"But there's not much downside either, right?" he said. "The question is, what's changed since the last time they saw it? There is this full opinion, this full hearing before the judge and the record. So that may be enough." 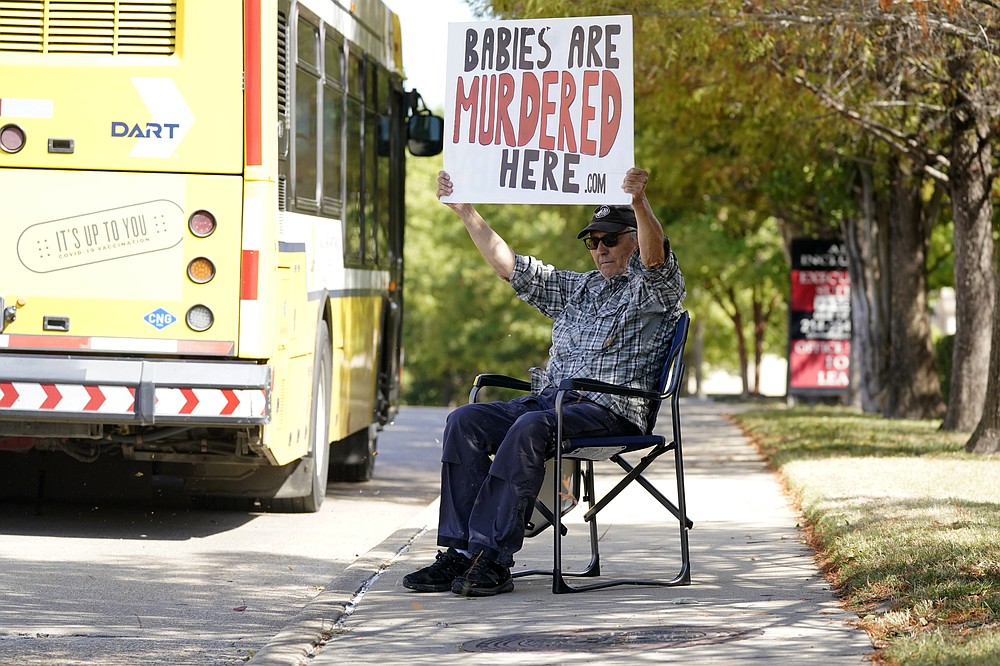 David Trujillo holds a sign a bus drives by on the street in front of a building housing an abortion provider in Dallas, Thursday, Oct. 7, 2021. A federal judge has ordered Texas to suspend a new law that has banned most abortions in the state since September. The order Wednesday by U.S. District Judge Robert Pitman freezes for now the strict abortion law known as Senate Bill 8. (AP Photo/LM Otero) 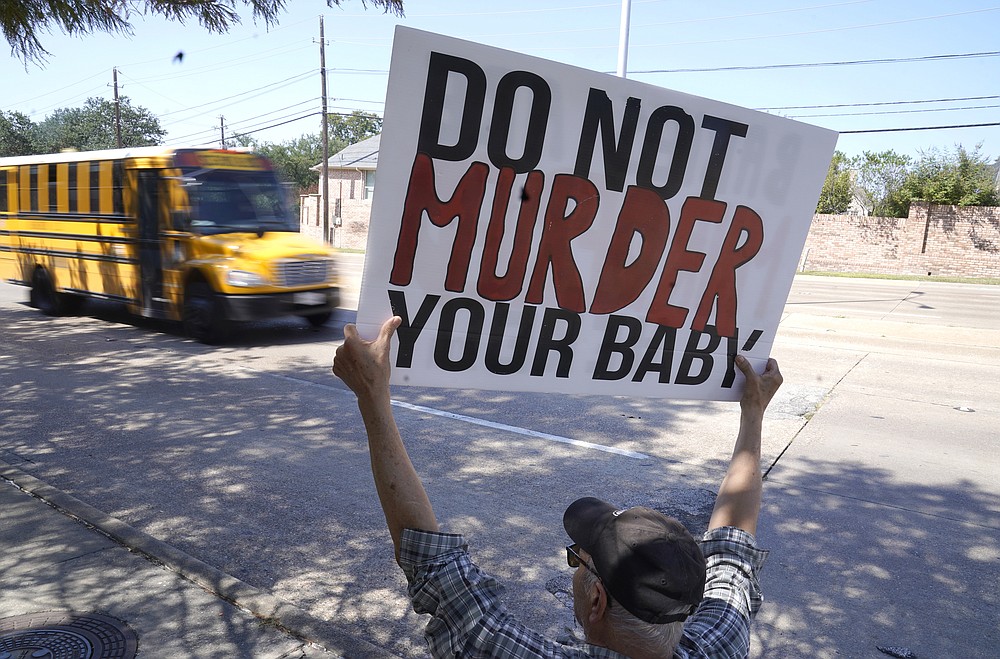 David Trujillo holds a sign as a school bus drives by on the street in front of a building housing an abortion provider in Dallas, Thursday, Oct. 7, 2021. A federal judge has ordered Texas to suspend a new law that has banned most abortions in the state since September. The order Wednesday by U.S. District Judge Robert Pitman freezes for now the strict abortion law known as Senate Bill 8. (AP Photo/LM Otero) 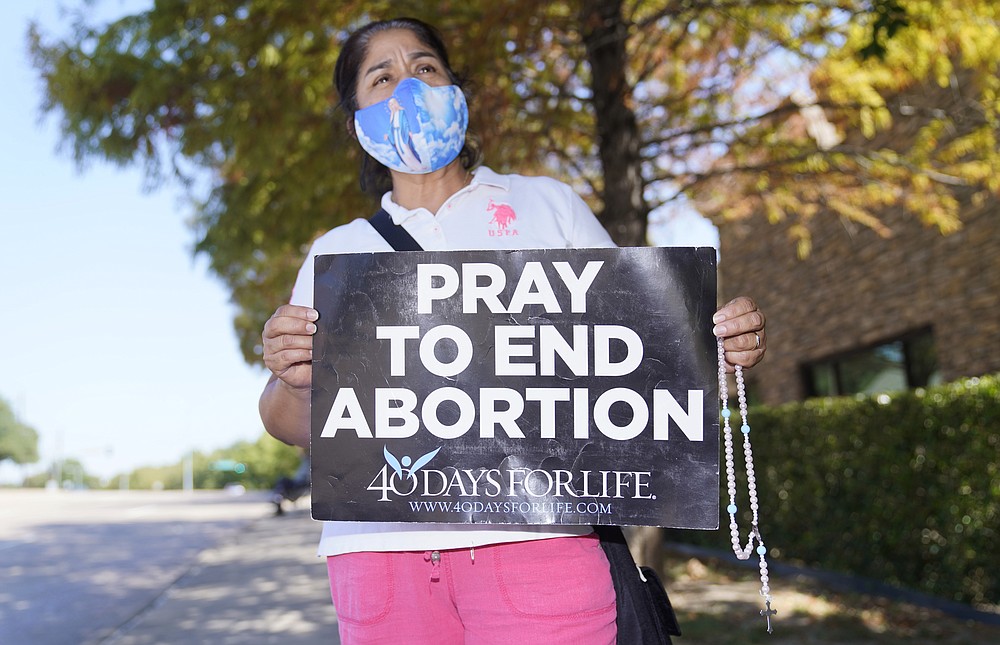 Maria Pe&#xf1;a holds a rosary and sign out outside a building housing an abortion provider in Dallas, Thursday, Oct. 7, 2021. (AP Photo/LM Otero) 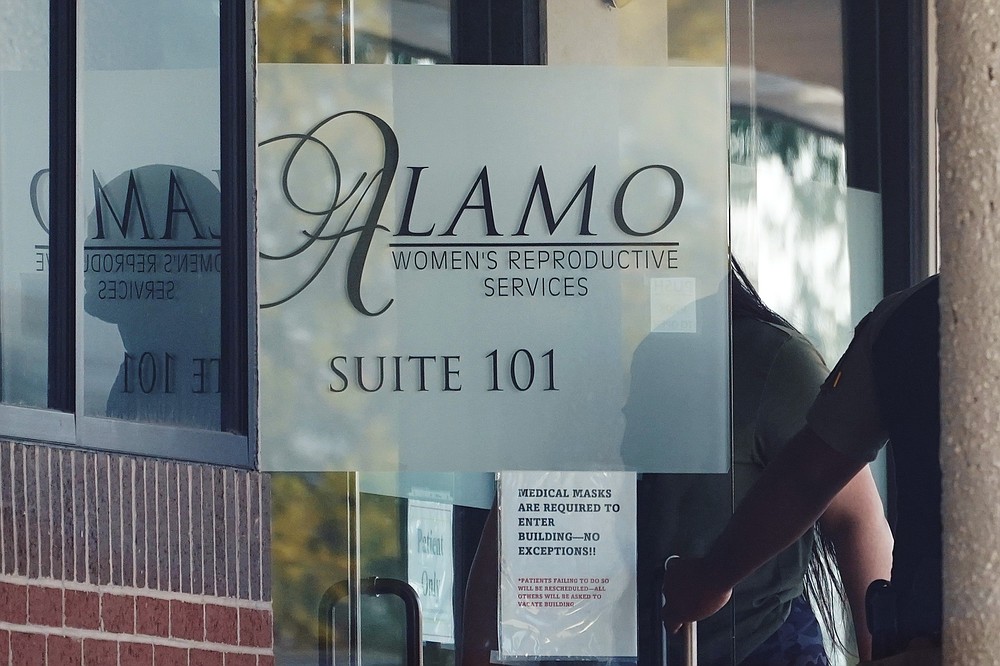 A woman enters Alamo Women's Reproductive Services, Thursday, Oct. 7, 2021, in San Antonio. A federal judge ordered Texas to suspend the most restrictive abortion law in the U.S., calling it an &quot;offensive deprivation&quot; of a constitutional right by banning most abortions in the nation's second-most populous state since September, but abortion services in Texas might not instantly resume even with the law on hold because doctors still fear that they could be sued without a more permanent legal decision. (AP Photo/Eric Gay)