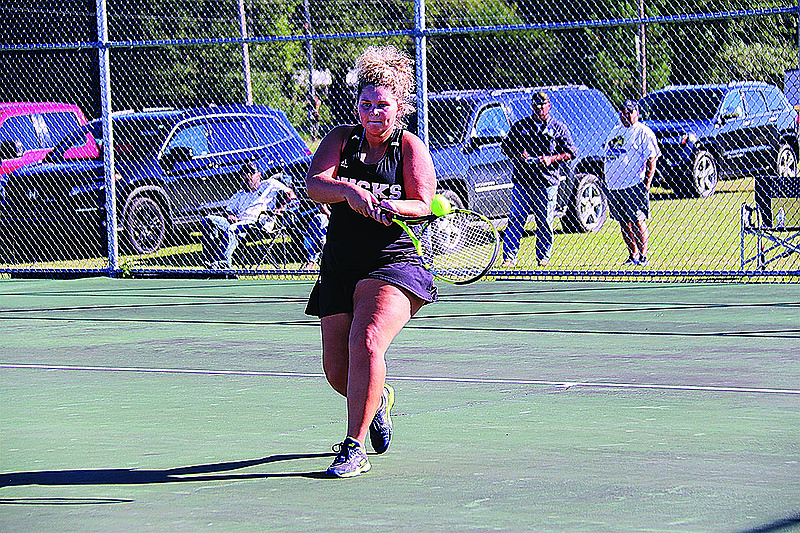 Smackover's Mackenzie Preston returns a backhand during action this season at Hampton. The senior will compete today in the 3A State Tennis Tournament at Burns Park in Little Rock.

Since she was a freshman, Smackover’s Mackenzie Preston has been climbing the girls’ singles ladder at the 3A State Tennis Tournament.

As a ninth grader, she lost in the first round. As a sophomore, she advanced to the second round before bowing out. Last season, she made it to the semifinals and ended up finishing fourth.

This season, well, she’d like to reach the next rung on the ladder. Or, maybe two.

“I am very excited to be competing in the state tournament this year, especially since I am a senior,” said Preston. “My goal is to get even further than I did last year. I will have to practice hard this week and work to reach my goal.”

Preston didn’t lose a singles match this season. Last week, she won the 3A-8 District singles championship for the third year in a row.

“It was a really big deal to me to win district again,” she said. “I have won it three years in a row now, and I feel like that is a really big accomplishment.”

It’s been a season of accomplishments for Preston, who earned All-State honors in golf two weeks ago. Coach Sonia Barker believes she’s ready for a big week of tennis, too.

“Mackenzie has been playing really well despite a lack of stiff competition during conference matches. She really adjusted to the various levels of her opponents in the District Tournament and executed what she knows to do with expertise,” said Barker. “Her serves, returns, footwork and shot variations were on point. I truly see no reason, though I know the state competition is tougher than district competition, why Mackenzie cannot go all the way in girls’ singles this year.”

That’s a lofty goal and a bold statement. Preston doesn’t shy away from the expectations. But she understands the road that’s ahead and chooses to speak softly and carry a big racquet.

“To win a state title in any sport is always exciting, but I honestly try not to think about it very much, because I feel like I am jinxing myself, and I'm not going to do as good,” she said. “I do think about it some though, and I feel like I have already accomplished so much in my high school career, and to have the opportunity to win state would be amazing.”

The 3A State Tournament begins Monday at Burns Park in Little Rock.