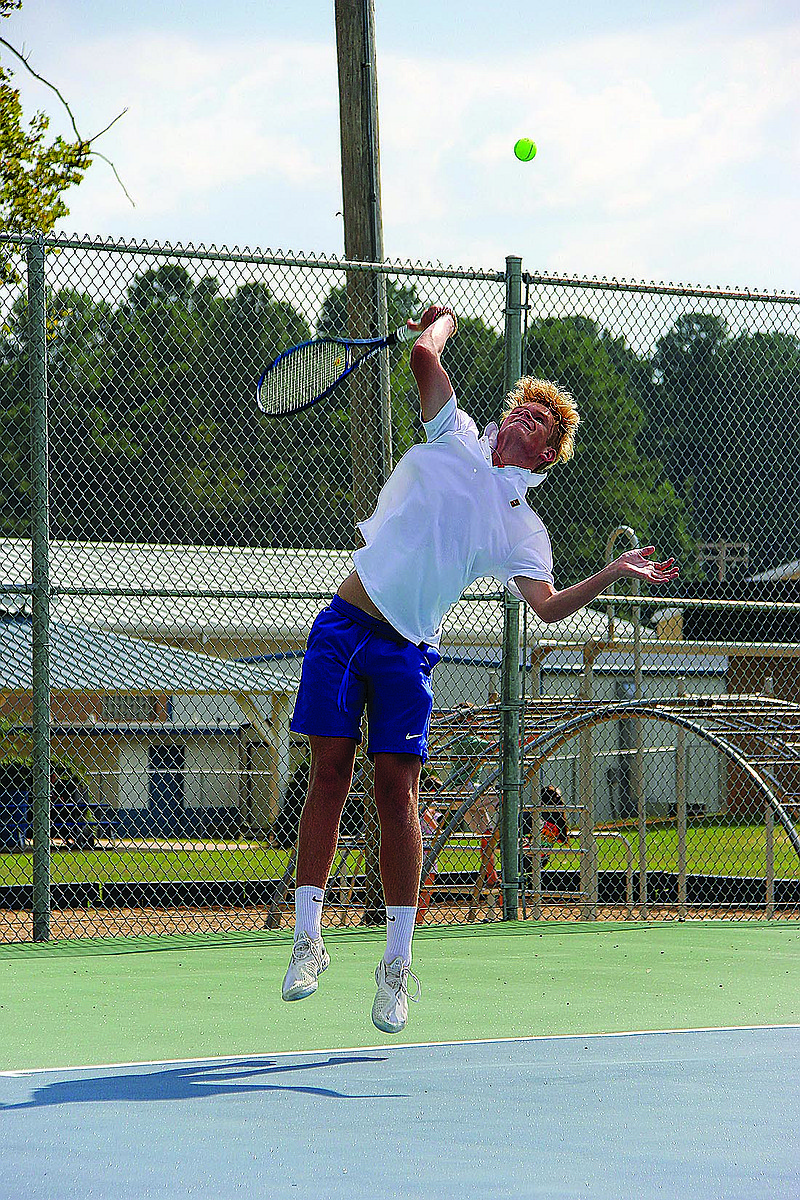 Parkers Chapel's Jackson Dison, with his 6-foot-6 frame, reaches high for a serve during action this season. The sophomore will compete in the 2A State Tennis Tournament today at Fairfield Bay Tennis Center.

Parkers Chapel’s Jackson Dison got his first taste of high school varsity tennis last year as a ninth grader. He advanced to the semifinals of the 2A State Tournament, and would finish fourth in the state.

Dison will return to the 2A State Tennis Tournament on Monday at Fairfield Bay Tennis Center. This time, the 6-foot-6 sophomore doesn’t just want a taste. He’s going after the whole enchilada.

“I’m super excited. Obviously, I’m hungry. I try to tell myself that I have a point to prove,” Dison said. “I just want to show them that I’m capable of this. It’s a big deal to me. I feel like I have the game. I feel like I’ve worked enough. This should be a good experience.”

“He is a pretty aggressive player and likes to approach the net, but he is also a very good baseline player and is able to place his shots

from side to side,” said Rapp. “He is very smart and good at predicting where his opponents will hit. Since last year, he has grown in his power and consistency.”

Whatever happens in this year’s tournament, any success Dison finds can be attributed to what happened last season.

“It didn’t take me by surprise. But, freshman season was more of a learning experience,” he said. “Yes, I wanted to win but I’m not going to say I was expecting to win. I took it and I worked with what I had. This entire past year, I thought about the competition, thought about how I played. I should be coming back more well prepared this year.”

Over the summer, he competed in several USTA tournaments. Although he plays basketball for the Trojans, tennis is his priority.

“I’m not a basketball player. I was on the team but this is what I’m here for. I’m a tennis player,” said Dison, who took up the sport in the fifth grade.

With his height, the serve could be a dominant weapon. But he has no interest in being a one-shot wonder.

“I like my serve. My first serve is big. My second serve I just slice. But my first serve I go for broke and if it’s on …”

Dison didn’t need to finish the sentence because the serve isn’t his primary weapon.

“I fully believe that my serve is definitely not the best part of my game. While I’m so tall, it’s good to know the potential is there and I can work on that. But, I love playing return games. I love returning people’s serves. I love getting to play the point because that’s the fun part.”

“My forehand, for sure - very, very, very flat - extremely flat. I can hit topspin but I come out every match hitting flat and if it’s not working, I’ll switch it up. My flat forehand is usually my biggest weapon if it’s on.”

“They were explosive. I love that type of game, just always attacking,” he said. “Thiem’s backhand is just beautiful, like world class.”

Dison will attempt to conquer the state with his ground strokes this week. A singles title is a goal but he said the team championship is THE goal.

“I’m happy with the season. Not even just me, I’m happy with all the guys,” he said. “Tennis, although it’s a singles sport, the team is not just me. Yes, I want the medal for myself but I want to see all of us holding the big trophy. I think we’re doing good. We’ve had some good doubles matches from our doubles guys. I’m happy with what we have going this year. I think we have a good shot to win a bunch of matches.”

Of course, for the Trojans to win as a team, they’ll need a big effort from the big 10th grader. He’s experienced enough to understand, he can’t win the tournament in the first round.

“I, obviously, don’t want to psych myself out. I always think about the match at hand, not the one after it, not the one before it,” he explained. “I mean, you don’t know. You can go out there and play a guy that everybody says is bad. But he woke up that day and he was super hungry or he was playing well and you have an off day and he gets you. It’s not worth worrying about the next round.

“You just have to take it one match at a time and, hopefully, work my way to the top of the bracket. Once I get to the top, I’ll focus on being at the top. Right now, I’m focused on round one.”

“This year, his goal is to win the state tournament in singles,” Rapp said. “It’s a big goal, but I believe he has the ability to do it.”

“I feel as if I’m ready,” said Dison. “It’s not just high school. I go out there, I’m practicing five, six days a week. We have different opportunities. I’m playing USTA tournaments. It’s just all about perfecting your craft. This is what I get ready for all year round.”