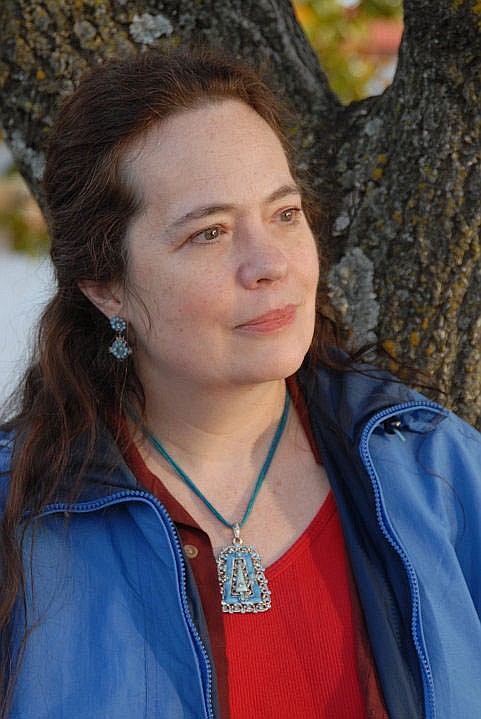 Eden Miller comes from an artistic family. Her mom Norma Tomboulian’s artwork is in the permanent collection of the Fort Smith Regional Art Museum; her sister Teddie McConnell, who took this photo, is an art photographer and songwriter; sister Necia Parker-Gibson is a poet; and her brother Lee is a jazz keyboardist and composer. (Courtesy photo/Teddie McConnell)

When we asked artist/actress/educator Eden Tomboulian Miller for her favorite comfort food recipe, she said she hoped homemade bread wouldn't be disappointing, "given that so many other people have turned to breadmaking for comfort and inspiration in these times."

But Miller doesn't make bread by throwing a packaged mix into a bread machine. She does it the old-fashioned way.

"The starting point for this adventure," she explains, "was the 1960 edition of 'Favorite Breads from Rose Lane Farm' by Ada Lou Roberts, a gift from my mother's mother. It was very good therapy for a teenager (circa 1965) to learn to be patient and careful with the method -- and occasionally adventurous with the ingredients! Being able to thump that dough while kneading it was also a constructive way to release less-than-amiable feelings.

"In working my way through the book, I did have failures once in a while," Miller admits, but "my parents and siblings were usually willing to devour the evidence anyway. Looking at the book now, it is easy to tell which recipes became my favorites: those pages are a little battered.

"Over time," Miller adds, "my breadmaking has become almost instinctive: no measuring of ingredients, no need to wonder if a stage is ready, being able to judge by aroma how done a batch in the oven is. The only problem with this, for purposes of an article, is that there is no longer a specific recipe!"

It's not surprising that Miller makes bread for both "the nutrition and delight of my mother and myself." She is, after all, a lifelong maker, born into a family tradition of art, theater, writing, music and education. A great-grandmother taught music, she says, her mother's mother, Dorothea Lamb, taught high school drama; her mom Norma Tomboulian's artwork is in the permanent collection of the Fort Smith Regional Art Museum; her sister Teddie McConnell is an art photographer and songwriter; and her brother Lee is a jazz keyboardist and composer. And "all of us, including other sister Necia Parker-Gibson, reference librarian at UA and poet, and father Clyde Tomboulian (deceased) are or have been teachers."

Miller is arguably best known in Northwest Arkansas as a visual artist, but having recently turned 70, she now invests her artistic energy in the Northwest Arkansas Audio Theater troupe. She's secretary of its board, a playwright -- her recent "Alice: No Place Like Tome" can be viewed on the Fayetteville Public Library website -- a director and assistant director, illustrator, costume designer and performer. For the next production, "The Western Hour," two episodes of radio shows from "those thrilling days of yesteryear" directed by Marshall Prettyman, she's designing the sound effects. Performances scheduled so far are at 2 p.m. Nov. 7 at the Fayetteville Public Library and 2 p.m. Nov. 14 at 214 S. Main St. in Springdale.

Miller says she attributes all that energy and her general good health to "fortunate genes, excellent nutrition and good luck."

"My parents, particularly my mother, started moving the family away from what was then the normal American diet very early, in the 1960s," she says. "At the time, it was hard to find yogurt, plain peanut butter, granola, or whole wheat bread except in health food stores. This scarcity was one reason why it was a good idea to make our own bread; besides, that way we KNEW exactly what was in it!

"Breadmaking, in general, takes time," she cautions. "Time to read the recipe, make certain you have the ingredients (or acceptable substitutes), make sure you understand the process, and to actually do it, from first mixing through baking. Fortunately, there are lots of 'meantimes' when the stages are rising or the bread is baking, when it is possible to do something else -- an exercise in multi-tasking, perhaps!" 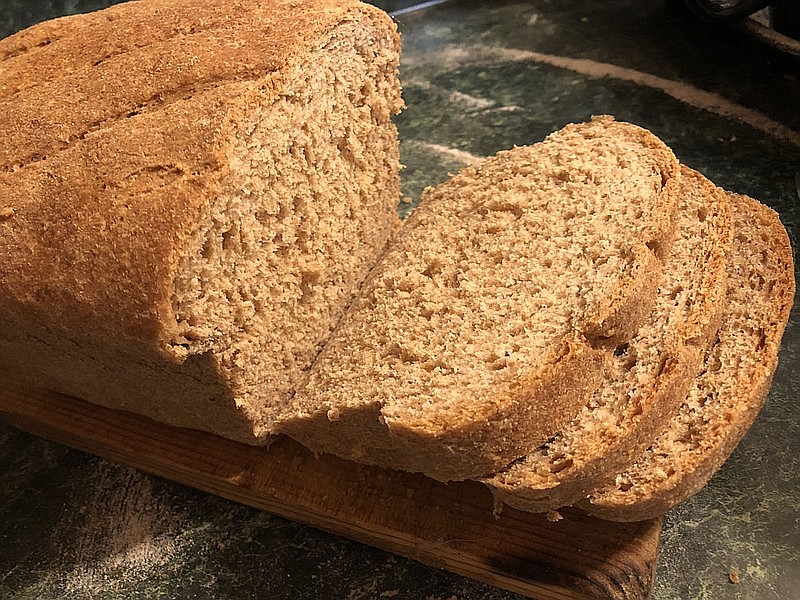 Eden Miller started making whole grain bread long before the pandemic made it trendy. She starts from scratch, with wheat flour, yeast and oatmeal, and no bread machine is involved. (Courtesy photo/Eden Miller) 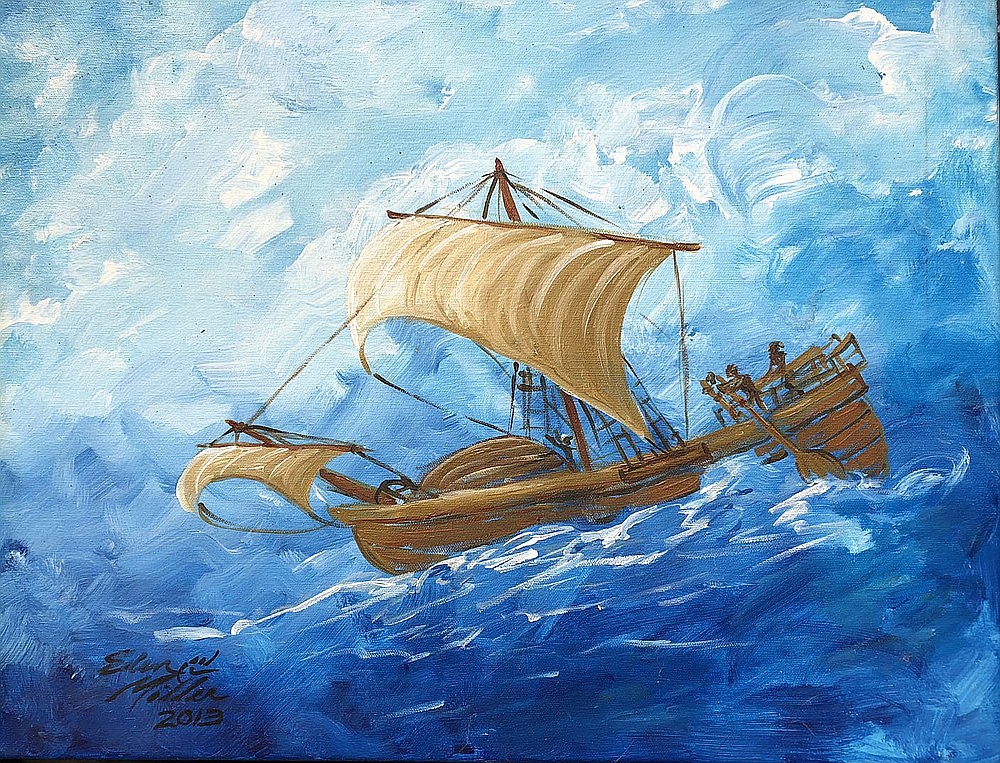 Miller is a lifelong visual artist whose work was always popular with buyers when the Arts Center of the Ozarks hosted its annual 5x5 art show and fundraiser. (Courtesy image/Eden Miller)
More News

The basic recipe for Comfort Whole Grain Bread is “roughly” as follows, Miller says. “I haven’t measured precisely in a long time; also, amounts will vary depending on the ingredients and the cook.” It makes four large loaves or perhaps four dozen rolls:

This stage gets the yeast working. In a large bowl (stainless steel preferred) stir together:

- About 3 cups of whole wheat flour

Then, in a separate container: put a pint of just-warm water, add and stir in about a tablespoon of honey, stir in three envelopes of packaged yeast.

Let this sit for about five minutes; if it starts to bubble and froth, the yeast is “proofed” — ready to use. If it doesn’t, give it a little more time. If it just sits there, re-do this part of the process. (The water must be not too hot: just comfortable to the touch.)

Add the yeast mixture to the big bowl, and stir thoroughly. The texture should be gloppy; if it is very thin, add more flour. Then gently cover the bowl with a towel or lid, and tiptoe away for 15-20 minutes to let it wake up and get rising. After this, stir it down and let it rise again, if you want. (You can keep stirring it down quite a while, if desired or needed. Up to a point, the more exercise it gets at this stage, the lighter the finished bread.)

Mixing in the rest of the ingredients. NOTE: This is where most possible variations come in. (Read a good bread recipe book, such as “Favorite Breads from Rose Lane Farm,” to get an idea of the possibilities.)

After the last stir-down of the sponge, add and stir in:

- About four cups of flour

Stir together thoroughly, adding more flour if necessary to get it stiff enough to knead. (This part is a workout for the stirring arm!)

Put another four cups or so of flour on a board or countertop, turn out the dough onto the board, add a bit more flour on top, and …

(Put your phone on silent…) With flour on your hands, pick up an edge of the dough and push it over into the rest. Turn the dough a quarter turn, and repeat. Keep this up for about 15 minutes, working more flour into the dough — but not so much that it’s very stiff. Dust your mixing bowl with flour, put the dough back in it, grease the top of the dough with a little oil, cover, and let rise in a warm place until doubled in bulk. This will take 45 minutes to an hour. Punch it down to its original size. You can shape loaves or rolls now, OR let it rise again (that exercise thing).

Now you become a sculptor of bread: loaves, rolls, artisan loaves on a baking sheet?

Grease your bread pans, or muffin tins (for rolls), or baking sheets with butter or oil.

Cut your dough into portions. Each portion should fill its container NO MORE THAN half full.

Put as many portions as your oven will hold into their containers, and let them rise, gently covered (yes, again). Once the portions have risen, you can gently brush the tops with melted butter or some beaten egg for extra golden-brown top, if you wish.

Punch down the rest of the dough (if any) until ready to shape it.

Bake each batch an appropriate time. My large loaves take about an hour. Rolls will take 30-40 minutes, because they’re smaller.

Test for doneness by gently tapping the surface with a table knife. The bread should not dent, and should sound hollow.

Turn out the loaves onto a surface where they can cool. (My favorite is a perforated pizza pan.)

Allow the bread to cool to a comfortable touch before slicing. Toppings are up to you!

Well wrapped in plastic — or, probably, waxed paper — this bread will freeze very well. Allow the bread to cool completely before freezing.

The current loaf should reside in the refrigerator; countertop storage is not recommended.

Toasting IS highly recommended; it brings back the aroma of the baking!