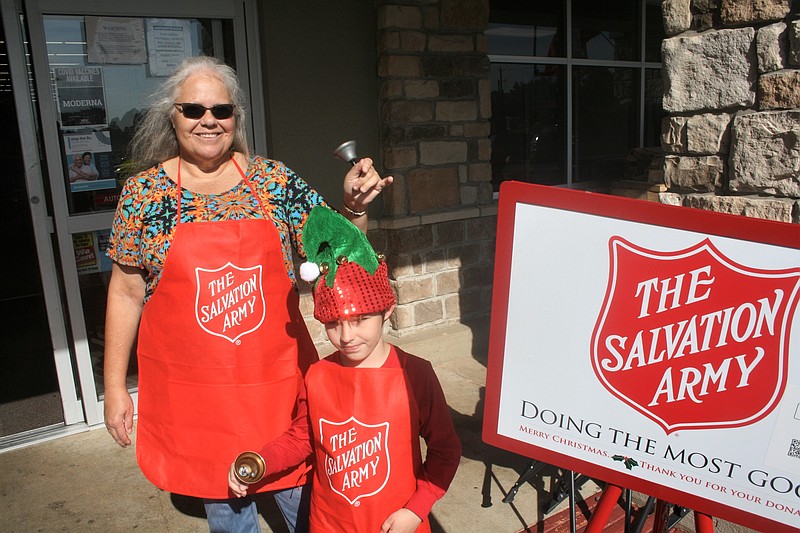 Salvation Army bell ringer Carla Grange and grandson Thomas Griffith serve as bell ringers outside the north Brookshire's in El Dorado. Grange does a daily shift as a volunteer and brought her grandson along during his Thanksgiving break. (Matt Hutcheson/News-Times)

The Salvation Army's Red Kettle fundraising drive is in full swing and, according to corps officer Major David Robinson, the nonprofit is still looking for volunteers to ring bells and collect donations.

"We're always looking for more volunteers. We have 212 hours filled and over 2,251 hours available," Robinson said on Tuesday.

The campaign kicked off at the annual lighting ceremony in downtown El Dorado last Thursday, where Robinson, alongside his wife, Major Joanna Robinson, announced the year's fundraising goal of $63,000 and accepted donations from Karl Malone Auto Group and the Civitan Club.

Since the kickoff, Robinson said, the fundraiser has been going full-throttle.

"We're ahead of where we were at this time last year... We had a guy ring at Wal-Mart on Saturday all day who [earned] around $1,000. We've been blown away by the amount of support we've had from the community," David Robinson said.

Volunteer Carla Grange does a daily bell ringing shift from 11 a.m. until 1 p.m. at the north Brookshire's in El Dorado.

During Thanksgiving week, Grange also brought along her young grandson, Thomas, for her shifts.

"I thought it would be a good thing for him to do this week while he's out of school, some service to the community," Grange said.

She encouraged others to join in and pick up shifts collecting donations.

"We need all the volunteers we can get. An hour or two of your time isn't much, we waste more time than that," Grange said.

The Red Kettle tradition began in 1891 with Salvation Army Captain Joseph McFee. McFee, according to the Salvation Army website, got the idea from a collection kettle called "Simpson's Pot" in Liverpool, England. He brought the concept to San Francisco and it spread across the U.S. and eventually the world.

According to the Salvation Army, the organization assists four-and-a-half million people during the holiday season.

The Salvation Army's Angel Tree program, which allows donors to "adopt" a child to purchase holiday gifts for, is also currently ongoing. According to the Robinsons, the tree located at HealthWorks Fitness still has "angels" ready to go.

Volunteers can view available days and times to ring the Red Kettle bell and sign up at www.registertoring.com.