Lady Trojan does it all in the Fall 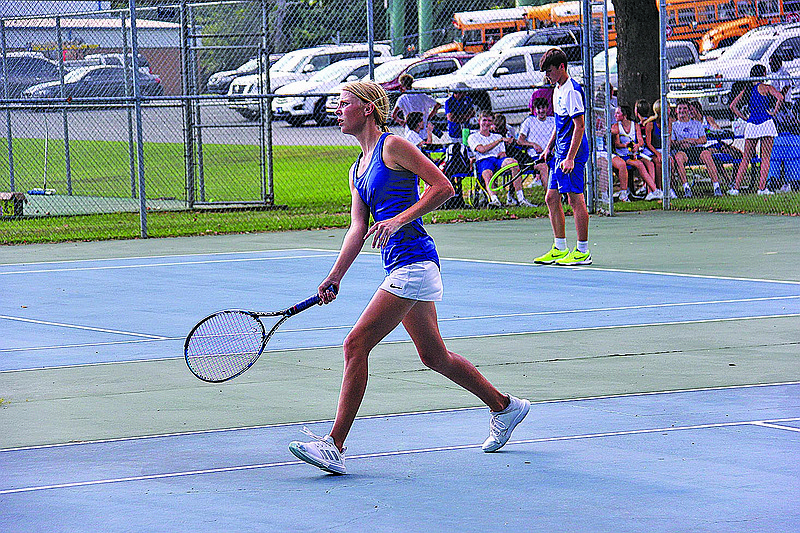 Parkers Chapel's Bella Frisby returns a shot during the tennis season. The sophomore helped the Lady Trojans win the 2A State Tennis championship and earned All-State honors in both golf and tennis. She was named the Sports Alley/News-Times Fall Sports Female Athlete of the Year.

Parkers Chapel’s Bella Frisby explained why she decided to drop cross country from her list of sports this year.

“I didn’t think I’d have time to be the best I wanted to be at it while I was playing golf and tennis.”

In retrospect, it was a smart decision.

The sophomore, literally, played as much golf and tennis as anyone in the state, advancing to the Overall in both sports.

Frisby helped lead the Lady Trojans to their second 2A State Tennis championship in a row, teaming with Kallie Martin to claim the state doubles crown. This was a few days after leading Parkers Chapel to the 2A State Golf Tournament, where she was runner-up in the medalist race.

“She had a stellar season. She was medalist almost every tournament we played in,” said PC golf coach Mona Williams. “She led the team in every shape, form and fashion. In a playoff for the conference championship, she was my number one player in that playoff and pulled out a win under that pressure. She had a spectacular season.”

Frisby shot a career-best 73 to lead the Lady Trojans to the conference title, won in a playoff.

On the tennis court, she lost one in-season match at the conference tournament before winning her second state doubles title in a row with her second partner.

“Bella had a great season,” said PC tennis coach Casey Rapp. “It's pretty amazing for her to win (state) freshman and sophomore year.”

Frisby and Martin received a tough draw in the Overall Tennis Tournament and fell in the opening round. In the Overall Golf Tournament, she was hampered by a sore back and struggled to a 95.

“Once she got to Overall for golf and she had tennis state the day before, I think she was exhausted by the time golf Overall came around,” said Williams. “She said she’s preparing for that next year.”

Competing in the Overall tournaments is not mandatory for the athletes. Despite not being at her best, Frisby was eager to walk on the same stage with the state’s best tennis players and golfers.

Playing two sports at the highest level simultaneously took a toll on Frisby, who was also practicing basketball in her spare time. It was a heavy load but she intends to tote it again next year.