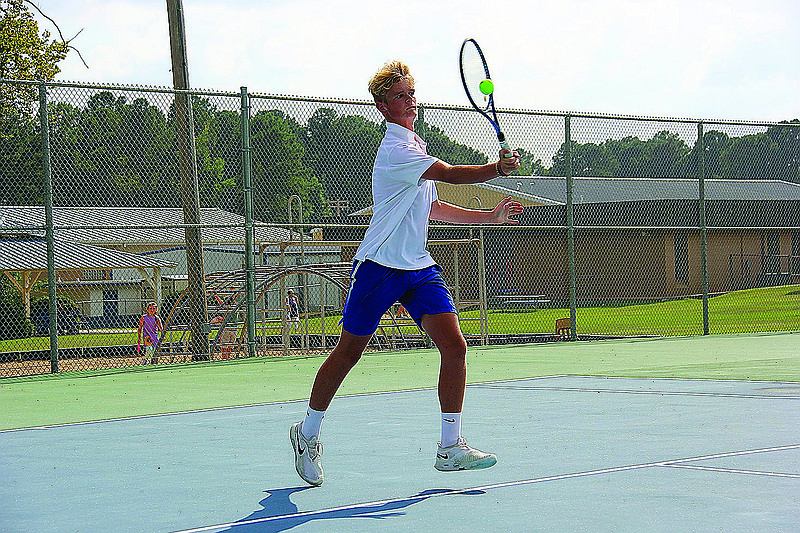 Parkers Chapel's Jackson Dison returns a shot during tennis action this season. The sophomore led the Trojans to the 2A State Tennis Championship and won the state title in singles. He was named the Sports Alley/News-Times Fall Sports Male Athlete of the Year.

A lion has to roar. It’s what they do.

But the roar wouldn’t mean much if they couldn’t back it up.

Parkers Chapel’s Jackson Dison proved to be the king of the jungle in 2A boys’ tennis this season. The sophomore walked through the state bracket without dropping a set, winning 6-0, 6-0 in the championship match.

“I don’t talk about myself really that much because I don’t want to say anything that would come off as cocky,” Dison said after the championship match. “But, I’m dangerous on my day. You don’t want to play me when I’m on and today I was on. I had to win. It was all for PC. I love my school.”

Dison led the Trojans to the 2A State championship. On the season, he went 16-1 in singles with the lone loss coming in the Overall Tennis Tournament.

“Jackson had an incredible season,” said PC coach Casey Rapp. “As a sophomore, winning state in singles is a huge accomplishment. I am so proud of his success this year.”

In conference play, Dison was 12-0 and dominant. He showed he could handle pressure situations in the state semifinals, scratching out a 7-5, 7-6 win over Jack Isola of Haas Hall Bentonville. Dison won the tiebreaker 9-7.

Every shot was necessary for the Trojans, who won the team title by a single point over Greers Ferry West Side and Maumelle Charter. At the end of the day, Dison was just as pleased with the team trophy as his own individual win.

“I’m proud of the team,” he said. “It felt great. I was more than happy with me and the team.”

The 6-foot-6 Dison, who also plays basketball, doesn’t divide his time among a bunch of sports. He said tennis will always be his primary focus. It had better be if he intends to remain king of the tennis jungle.

As for the lion’s roar, he knows it’s the bite that counts.

“Depending on who you ask, I probably was pretty cocky last year,” he said of his freshman season. “Yeah, I get emotional. It’s one of my downfalls but I’ve worked on it a lot. I’ve learned to keep it to myself more. All the energy you have, you can choose if it’s bad energy or good energy. You can channel it into a different way. Instead of getting mad and throwing your racquet, you can get mad and say, I have to hit this next shot better and play better.”