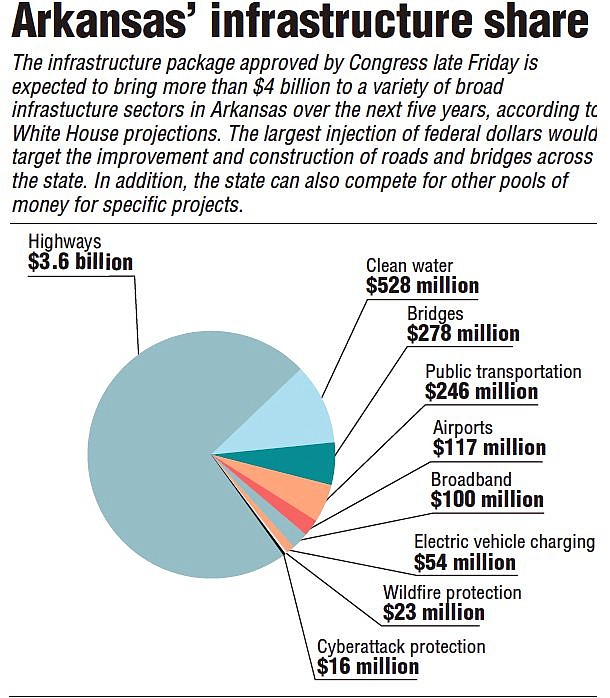 Arkansas would secure more than $4 billion in funding for a variety of broad infrastructure sectors over five years under a sweeping legislative package that cleared Congress on Friday, according to White House estimates.

President Joe Biden is expected to sign the infrastructure package, which will funnel funding for highways, bridge repairs and replacements, broadband access and water infrastructure to the states.

House Democrats pushed the $1 trillion legislation with the help of 13 Republicans. It has been a major legislative priority for the Biden administration ahead of the 2022 midterm elections.

The largest injection of federal money to Arkansas would target roads and bridges statewide.

Arkansas would get nearly $3.6 billion for highway programs and $278 million to replace and fix bridges based on formula funding, according to the White House analysis.

Over five years, the infrastructure package will provide an estimated $246 million to bolster options for public transportation in Arkansas, according to the Biden administration.

More money is on the table for Arkansas, too; the state would be able to compete for almost $16 billion devoted to projects with "substantial economic benefits to communities" and funding from a $12.5 billion bridge investment program, according to federal projections.

Exactly when and where the money will flow into the state will be determined as the legislation is implemented.

Biden over the weekend said that Americans will begin to see the effects of the bill in the next two or three months, but that its full impact will take decades to be fully seen.

The state Department of Transportation expects to hear more specifics in the coming weeks over how the money will be put into different federal fund categories, said Dave Parker, an agency spokesman.

Either way, Parker said in an interview, the infrastructure funding could help accelerate the completion of ongoing construction projects in which roads and bridges are being built.

Arkansans fork out an average of$671 every year from driving on roads that need repair, according to the American Society of Civil Engineers. Just over half of the major roads and highways maintained locally or by the state are in mediocre or poor condition, according to a 2020 report from the Washington, D.C.-based organization TRIP, which researches surface transportation issues.

With the package clearing Congress, Joe Quinn, executive director of the Arkansas Good Roads Foundation, said his members will now start to get a better understanding of what the legislation means for them.

"It's been a long process," he said, describing the legislative movements on the bill.

Congressional passage of the infrastructure legislation comes months after the Natural State grabbed national attention with the discovery of a fracture in a beam of the Interstate 40 bridge connecting Arkansas and Tennessee.

The episode, which sparked the immediate shutdown of a bridge that carried more than 40,000 vehicles a day, underscored the challenges facing Arkansas as it grapples with aging infrastructure.

While the bulk of the new spending called for in the bill targets highways, there's also funding for broadband internet access.

Arkansas would secure a minimum of $100 million for broadband coverage, according to the White House. About a third of the state would also qualify for a benefit aimed at helping low-income families pay for internet access, according to federal estimates.

Expanding broadband in Arkansas has been a priority for Gov. Asa Hutchinson and many state lawmakers, who have approved more than $275 million in funding for broadband expansion using federal pandemic relief funds. A legislative committee also recently approved a $2.2 million contract to assess the state's broadband needs and develop a master plan for expanding high-speed internet service.

Arkansas ranks 41st in the U.S. for broadband coverage, according to the website broadbandnow.com.

Under the federal infrastructure legislation, Arkansas over five years would also get $528 million to boost water infrastructure and ensure clean drinking water, according to the White House. It says that figure is "based on the traditional state revolving fund formula."

Biden has heralded the package as a "once-in-a-generation investment" poised to create millions of jobs and modernize the nation's aging infrastructure.

"We did something that's long overdue, that long has been talked about in Washington but never actually been done," he said.

Under the legislation, other funds that would come to Arkansas include $23 million over five years to defend against wildfires, $16 million to shield against cyberattacks and about $117 million for airport infrastructure development, according to White House estimates.

An estimated $54 million is included for expanding a charging network for electric vehicles in Arkansas over five years. State officials have been trying to grow the number of charging stations in Arkansas, which has ranked in the bottom quarter of states when it comes to availability of the stations.

The electric vehicle industry has been expanding, with some manufacturers, like General Motors, pledging to eliminate gas and diesel "light-duty" cars and SUVs by 2035.

While Hutchinson praised the passage of the infrastructure legislation "for setting aside partisan differences to pass a bill that works for the American people," Arkansas' all-Republican congressional delegation unanimously opposed the bill.

Mostly, the delegation members said that infrastructure investment was needed, but that this legislation went beyond infrastructure and carried too hefty of a price tag.

U.S. Rep. Steve Womack, R-Ark., issued a statement on the bill clearing the House, saying the infrastructure package was "a shill for the Green New Deal."

"We are talking about building a modernized system through strategic investments in things like roads, bridges, tunnels, and broadband. This bill is anything but that," he said in the statement.

U.S. Sen. Tom Cotton, R-Ark., criticized the legislation after it passed in the Senate in August with support of top Republicans.

"Arkansans support real infrastructure projects like roads, bridges, waterways, rural broadband, and ongoing maintenance," Cotton said in a statement. "They do not want President Biden's 'social infrastructure' and climate alarmism, especially under the threat of increased inflation and higher taxes."

Grant Tennille, chair of the Democratic Party of Arkansas, slammed Arkansas Republicans for not backing the infrastructure measure, arguing that the state for years has endured "critically bad infrastructure."

Arkansas Republicans "voted against funding our state's needs, but you can bet we'll see them rushing to take credit at ribbon cuttings for projects they wouldn't even vote to fund," Tennille said in a statement Monday.

Information for this article was contributed by staff members of The Associated Press and by Noel Oman, Michael R. Wickline and Ashton Eley of the Arkansas Democrat-Gazette.