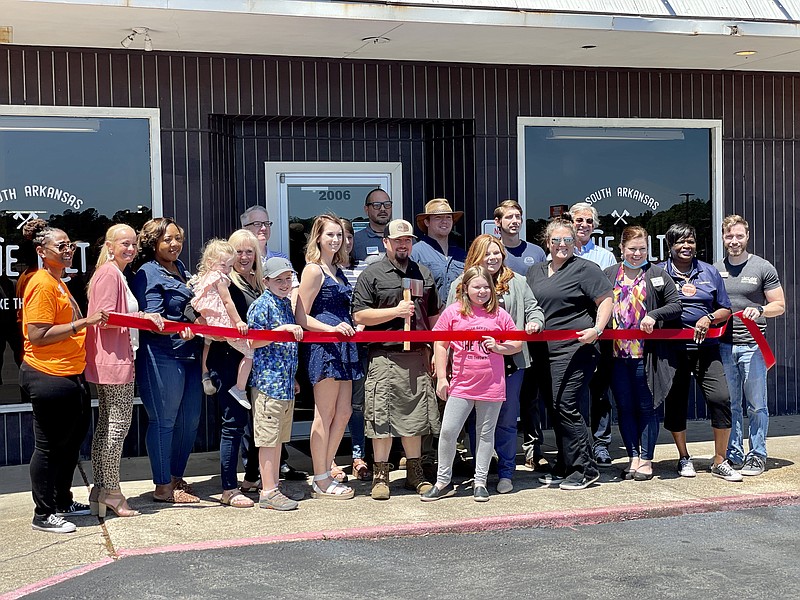 The Kilt-South Arkansas Axe Throwing held its ribbon cutting ceremony with the El Dorado-Union County Chamber of Commerce on Friday.

Ryan and Angela Thomas, along with their daughter Madelyn Johnson, recently opened the axe throwing business at 2006 N. West Ave.

To celebrate the ribbon cutting, there was food including cupcakes with little axe figurines sticking out of the icing. There was also gold, white and clear balloons placed throughout the space. 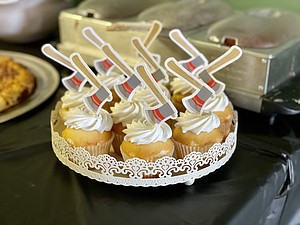 Ryan Thomas wore a kilt and had his own personalized axe that he used to cut the ribbon during the ceremony.

“My husband Ryan Thomas did it all and I’m so proud of him,” Angela Thomas said. She also thanked manager Tiffany Lowery and assistant manager Caitlin Sherman during her speech. Angela Thomas also gave a shout out to her daughter, Madelyn.

“Maddie is the real boss,” she said. “She can show everybody how to throw probably better than I can. She throws all the time.”

“I also want to thank Morgan (Jones), he is Ryan’s left hand. Whatever Ryan needs, he has been here,” she added.

Steve Biernacki, executive director of the South Arkansas Historical Preservation Society and chamber ambassador, yelled out, “welcome to the Chamber,” followed by a thunderous applause by all in attendance.

Members of the Chamber gathered back inside after the ribbon cutting ceremony and Ryan Thomas gave a demonstration on how to properly throw an axe. Thomas was able to hit a bullseye during one of his demonstrations.

Those in attendance began to go up to different axe throwing stations and attempt to hit the target. Laughter filled the air as many hit everything around the target and not the target itself.

The fun and joy that attendees exhibited is what the Thomas’ said they hope the people of El Dorado will come out and experience for themselves.