ESD honors over 240 years of experience with district retirees 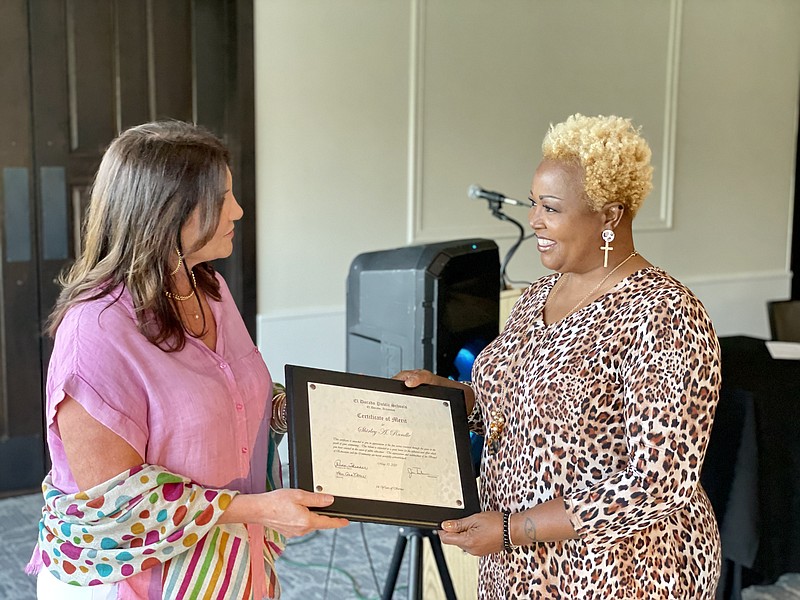 School Board President Renee Skinner presented retiree Shirley Randle with a plaque honoring her years of service in the school district. Randle was one of nine retirees honored last Thursday at the El Dorado Gold and Country Club. (Marvin Richards/News-Times)

The El Dorado School Board held a special meeting on Thursday, May 13, at the El Dorado Golf and Country Club to honor the educators retiring from the district this year.

The meeting was held in one of the upstairs meeting halls of the club and staged for a catered dinner for the retirees and their families. A vase of flowers was placed as part of the table setting for each retiree, a memento they got to take home with them at the end of the night.

The school leader of each retiree gave a brief overview and history of the educator’s time within the district. A plaque was then presented by school board president Renee Skinner to each retiree to commemorate their years of service.

“He has added up the total number of years spent by these teachers and employees in our district,” Tuberville said. “Tonight, we have 241 and three quarters years of experience that are leaving our doors. Amazingly, all those years were spent in this school district, all given to the kids of El Dorado, and on behalf of the board I want to thank you. You’ve touched our children’s lives in many different ways. Not only have you all cared for the kids but you’ve also cared for your fellow teachers and those coming alongside you.”

Some of the retirees became visually emotional and impacted by the words of Tuberville. She concluded her presentation with recognition of the impact educators have on their students’ lives.

“What you do is so much more than what your job title is. What you do is a ministry; you’ve touched so many lives and a lot of those lives, some of whom are grown now, go on to touch other lives and it is because you care that these kids become the wonderful adults that they are. So on behalf of the board, we thank you,” she said. “Please go and enjoy your retirement, make the most of it and do it big. Thank you again for all you have done for our kids and our school district.”

“I don’t know if much else can be said after what Susan just said,” Tucker stated.

Tucker proceeded to read a quote by one of his favorite educators, Haim Ginott.

“I’ve come to a frightening conclusion that I am the decisive element in the classroom. It’s my personal approach that creates the climate. It’s my daily mood that makes the weather. As a teacher, I possess a tremendous power to make a child’s life miserable or joyous. I can be a tool of torture or an instrument of inspiration. I can humiliate or heal. In all situations, it is my response that decides whether a crisis will be escalated or de-escalated and a child humanized or dehumanized,” he said.

After reading the quote, Tucker told the retirees and their families how he feels they have all lived up to higher expectations of Haim Ginott.

“I can say with all confidence that in front of me, every person in this room, regardless of their position, is an educator of some sort,” Tucker said.

“I can also say that every single one of you has brought joy to the people that you have been around, brought inspiration to the children and people you have been around. You all have brought humor, you’ve healed, you’ve de-escalated many crises and you have humanized many children. The work you have done will live on for a long, long time in the students that you’ve had,” he said.

Tucker concluded his presentation with a thank you and words of appreciation for the years of service by the retirees.

“Our time on Earth is precious,” Tucker said. “I admire every person that decides to get in education or to serve children because the limited and precious time on this Earth for them is spent serving others… We’re proud to have worked with you. Thank you for all you’ve done and please enjoy your next season, you really deserve it.”