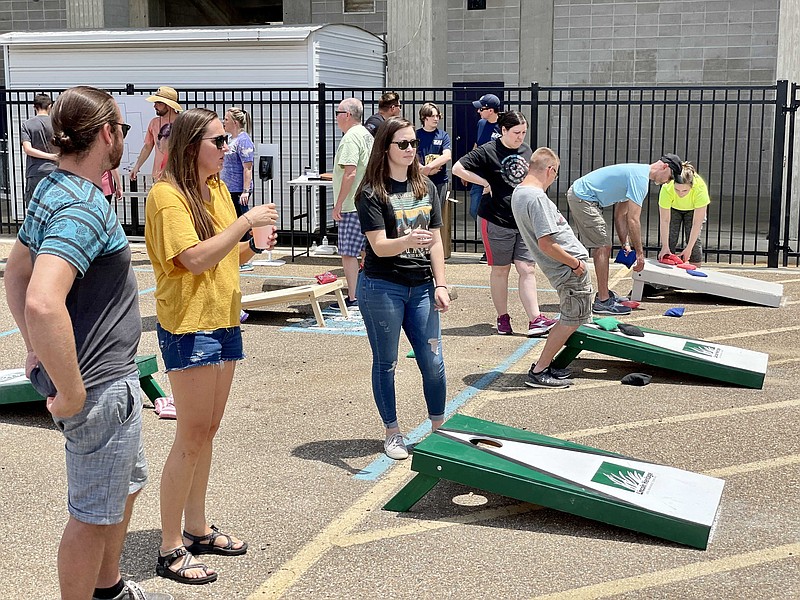 Many came out to enjoy the Food Truck Festival on Saturday and enjoyed games like cornhole, jenga and more. (Marvin Richards/News-Times)

Many vendors had their food trucks parked within the parking lot for attendees to enjoy tasty treats on what was a warm, sunny day. Alongside the vendors were local organizations also wanting to inform attendees about some of the local resources available to them within the community.

One of those organizations was the Union County Public Library System (UCPLS). Michael O’Connell, UCPLS director, had a tent set up giving out free books and library cards to visitors.

“We’re giving away free books because it is so important for children to have books at home to read,” O’Connell said. “We’re also trying to increase people’s awareness of the fact that we actually have six branches in the county (El Dorado, Huttig, Junction City, Norphlet, Smackover and Strong) and we want everyone to come and take advantage of the services we offer.”

O’Connell went on to empathize the importance of reading, even in an age where so much is technology based.

“Literacy is vital, especially in the information age,” O’Connell said. “You’re never going to stop reading as you age. Also, the better you read, the better you will write and build an expansive vocabulary.”

UCPLS also offers a catalog of eBooks and audiobooks through their Libby app or online portal at ucpls.org, which O’Connell encouraged people to check out.

LifeShare of El Dorado had one of their big medic RVs parked at the festival where they conducted a blood drive.

There were also games galore at the festival including cornhole and lifesize jenga and The Kilt of South Arkansas had a couple of axe throwing stations for people to enjoy.

Two people in attendance, enjoying the sights and sounds of the festival, were Lorraine and Lucious Frank Bibby, a married couple that have been living in El Dorado since 1978. They said they wanted to come out, enjoy some good food and have a good time.

“I saw that they were doing this and I wanted to come and check it out,” Lorraine Bibby said said. When Lucious Frank Bibby was asked his reason for coming, he responded laughingly, “happy wife, happy life.”

The two also talked about the foods they were looking forward to trying.

“I’m going to try a quesadilla today,” Lorraine Bibby said. “I would like to try some good BBQ as well.”

The Food Truck Festival was well attended and went from 11 a.m. until 6:30 p.m. Funds raised were to go toward the BGCE.