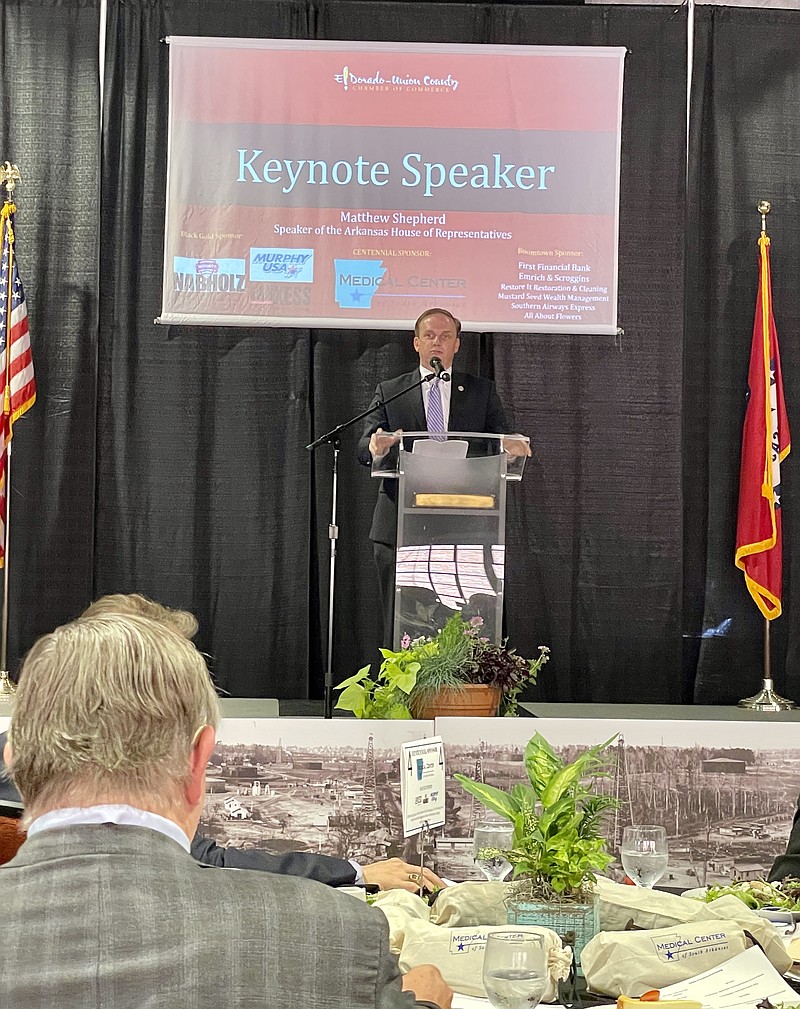 The El Dorado-Union County Chamber of Commerce held its annual meeting on Wednesday. Many local businesses and business leaders gathered at the First Financial Music Hall for the event, and guests were welcomed with a catered lunch already prepared and on the tables throughout the hall.

One of the first agenda items of the meeting was presenting the Nonprofit Excellence Award. Scott Walker, of First Financial Bank, did the honors. Attendees were shown three videos that highlighted the works of the three nominees: The Interfaith Help Services, The Boys and Girls Club of El Dorado and El Dorado Service League. All groups were honored for their services and The Boys and Girls Club received the award.

The Ambassador of the Year award was given to Karen Hicks, Union County Coordinator of The Call. Hicks’ work with The Call includes advocating in the community for foster children across Arkansas.

Randy Zook, President and CEO of the Arkansas State Chamber of Commerce, was charged with introducing the keynote speaker, Speaker of the House and El Dorado native Matthew Shepherd. Zook noted how Shepherd’s skills in negotiation and diplomacy led to the recent passage of a recent class protection bill that was signed into law by Gov. Asa Hutchinson.

Under the law, offenders that commit violent felonies against individuals due to their “mental, physical, biological, cultural, political, or religious beliefs or characteristics” would have to serve at least 80% of their sentence behind bars.

Some critics say the law does not go far enough and is not a true hate crimes law, in part because it fails to mention race, sexual orientation and gender identity; but Zook said that the new law does give businesses that care about diversity and equity confidence in their decision to invest in Arkansas.

“This was one of the most contentious issues of this session but one of the most important measures for business and economic development in our state,” Zook said. “Arkansas was one of only three states in the country without a similar law on the books, and it was beginning to affect our ability to attract jobs, recruit and retain our workforce.”

After Zook’s introduction, Shepherd came to the podium and was greeted with a standing ovation.

During his address, Shepherd ran down a list of his accomplishments and legislative goals that he says will better serve the state of Arkansas and more specifically, south Arkansas. He also talked about the unique nature of El Dorado, and its ability to boast being home to corporations, have a Promise program that pays for college and investing in an art and music hall like the First Financial Music Hall and other parts of the Murphy Arts District complex.

To cap off his speech, Shepherd talked about how the spirit of optimism he has seen in south Arkansas and particularly in El Dorado is what has led to his success in negotiating and working with people that may disagree or can’t see eye to eye.

Shepherd then pulled out a Bible that stays within the House of Representatives that was given by the late Colonel Thomas H. Barton of El Dorado. He shared with the audience that on the day he was voted speaker, decided to use the Bible for guidance.

“I open up the Bible and there is a handwritten note by Colonel Barton,” Shepherd said. “‘With sincerest best wishes to the great House, follow these rules and you will be right. T.H. Barton, Feb. 25, 1943.’”

“Here was a message from Colonel Barton that nobody probably looked at a long time, and I opened it up, and as a son of south Arkansas and educated at Barton Jr. High, reading this felt like a handwritten letter to me,” he continued. “It is also a vivid reminder of the influence of south Arkansas on our state; but it is also a reminder that if we do the right thing, we will be rewarded.”

Shepherd was greeted with another standing ovation at the conclusion of his address.

To wind down the annual meeting, a new Chamber Chairperson was appointed. Outgoing Chair and Government Supply Services President and CEO Greg Modica thanked those that worked with him during his tenure. He then introduced incoming chair, Medical Center of South Arkansas CEO Scott Street, and passed off the gavel.

After Street’s speech, one of his first acts as chair was to adjourn the 99th annual meeting. 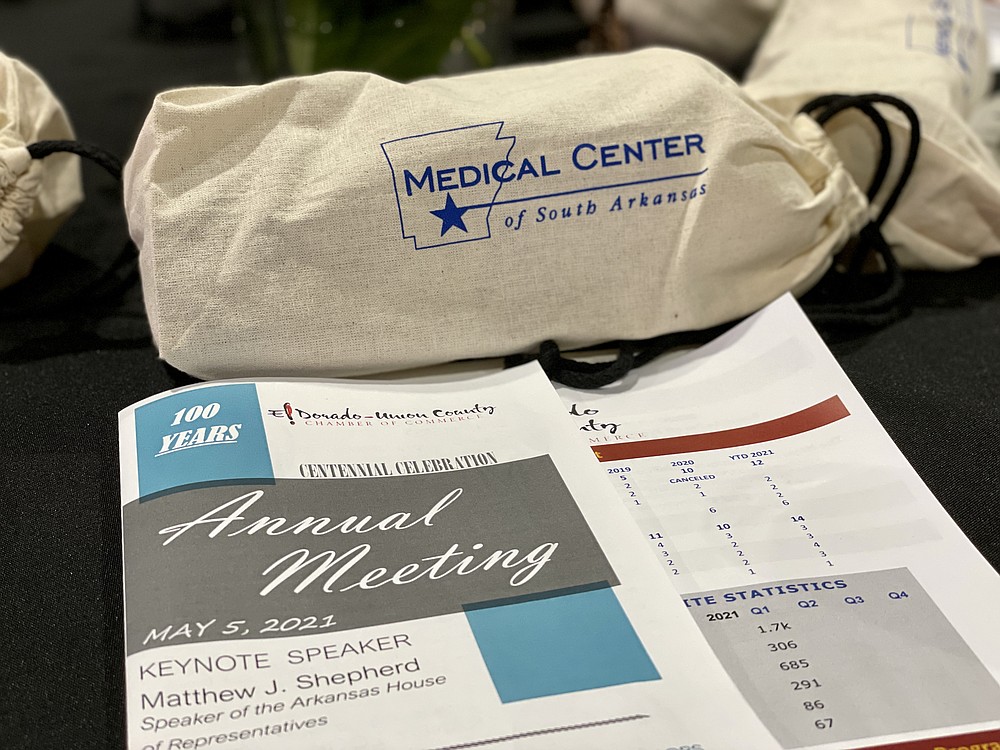