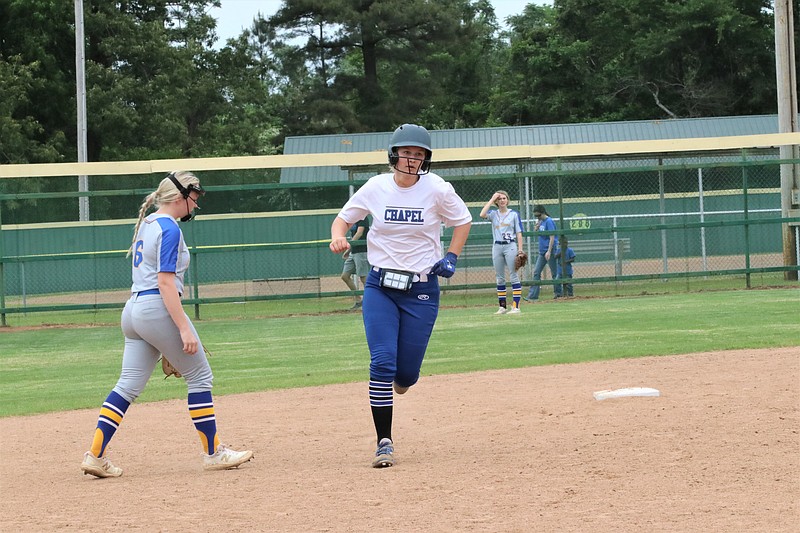 PARKERS CHAPEL – Parkers Chapel knocked off top-seeded Spring Hill 4-1 Saturday in the championship game of the 2A 8 District Softball Tournament at Swilley Field. The Lady Trojans will be a No. 1 seed in next week’s regional tournament at Horatio. PC will face Poyen Thursday at 10 a.m.

“It’s a huge momentum shift,” said PC coach Miranda Carlisle of the win. “I am incredibly proud of my girls. I know they’re fighting every single at bat, every single play on defense. I think it says great things about us going into the rest of the postseason.”

Taylor Fortune’s two-run homer in the fourth inning erased a one-run deficit and gave the Lady Trojans a lead they wouldn’t relinquish. Drue Thomas tossed a two-hitter for Parkers Chapel. The senior went the distance in the circle, striking out eight while walking two batters.

The Lady Bears opened the scoring in the third. Cally Sullivan singled, stole second, went to third on a passed ball and scored on Raley Sullivan’s ground out to short.

The Lady Trojans took the lead in the top of the fourth. Thomas singled and advanced to second on Kallie Martin’s sacrifice bunt. Fortune then drilled a line drive home run to left field.

“It was incredibly important. She’s our five-hole hitter and she always turns it on in those pressure situations,” Carlisle said of the hit. “It was a huge momentum shift. That was huge for us.”

Parkers Chapel added a run in the fifth. Reaux McAuliffe reached second base on an error. Bella Frisby sacrificed her to third before Thomas drove in a run with a double. In the seventh, Frisby singled and scored after Martin singled and the Lady Bears made an errant throw on the play.

Spring Hill got a base runner on in the bottom of the seventh on an error. But Thomas got a ground out to short, a bouncer back to the circle and a fly ball to center to end the game.

Thomas was 3-for-4 at the plate. The Lady Trojans had nine hits in the game.