El Dorado senior aims to go out with a bang 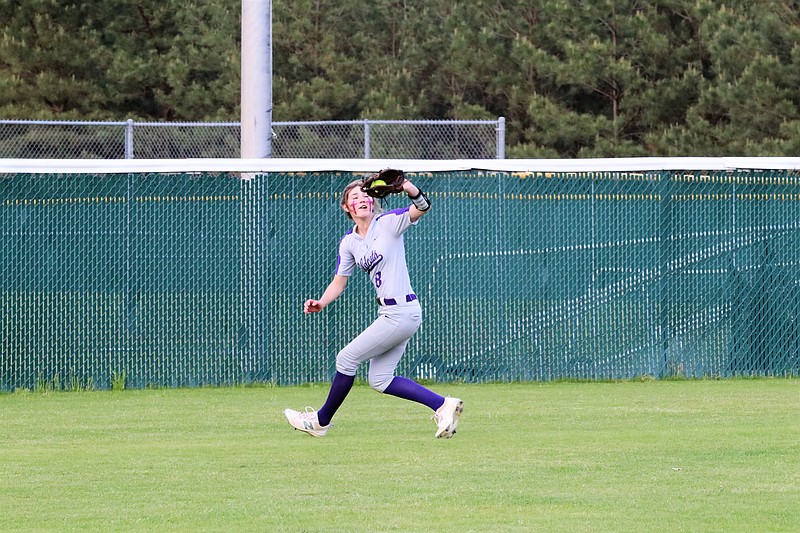 El Dorado's Abigail Thompson runs down a fly ball in leftfield in action this season at the El Dorado/Union County Recreation Complex.

Some folks only need one reason to give up. Others need just one reason to keep going. El Dorado’s Abigail (Abby) Thompson has waded through waves of disappointments in her prep athletic career. The senior was determined to go out with a bang.

The Lady Wildcats’ leftfielder has enjoyed her best softball season, emerging as one of the team’s top hitters. Those hits include the first home run of her career.

“That has been the highlight for me,” Thompson said. “That’s been my biggest goal to finally hit a home run in a game. I always do it in practice but never in a game. And it finally happened, and I was very happy.”

Thompson said she didn’t know what the pitch was, but it was right down the middle and she was ready for it.

Few things have been right down the middle for Thompson over the past year. After two years of junior varsity, she was set to start at the varsity level last year before the season was cut short by the pandemic.

About 10 days before the state swim meet, Thompson was informed she wouldn’t be able to compete.

“That was very frustrating. I was trying to end with a bang. It was my last year of swimming,” she said. “The meet before state, I already had hit a personal best and that was with me not feeling good. So, I knew by next weekend when state came around, I’d be feeling more pumped up, better and get even better times. But it turned out, me not feeling good was COVID.”

An otherwise outstanding swim season was dampened as four El Dorado girls didn’t get to compete in the biggest meet of the season.

“I thought we had a really strong relay team. We were picked to place first in one of our events. We were not able to compete in that so that hurt a little bit,” said Thompson, who recalled how she received the news.

“State was going to be the next weekend. I found out I had COVID about three days after I got home from conference. Mom was the one that gave me the results that I was positive for COVID. The one that told me I probably wouldn’t be out of quarantine to travel to state and compete.

“My first reaction? I didn’t really have a reaction. I was just like, ‘dang.’ It’s my last year and I can’t even enjoy the final … I had the best times out of the four years I’d been swimming. I’d worked to get specific times, and this was the year I was finally reaching those times and I was going to get to show it off. And that did not get to happen.”

Obviously, the COVID virus was much more heartbreaking for some, which Thompson acknowledged. Wrecking her junior year of softball and senior year of swimming was still a devastating blow.

“I did learn from it. I knew not being able to compete, you could take that time to pout or be sad about it. But I saw it as a way – I had softball coming up and it was my last year in that, so I had to work even harder to take advantage of that and go out with a bang in that. And to just say I accomplished something even greater despite COVID being such a big factor and messing a lot of things up,” she said.

It hasn’t messed up her senior softball season. In fact, this season is the best she’s ever played. COVID can take some of the credit.

“That motivated me a lot because I realized how easy it is to have something taken away from you,” she said. “I didn’t know if this year was going to be like last year and one of the first games would end up being our last game. So, I took that opportunity to play each game like it was going to be my last.”

Thompson has emerged as a key figure in the Lady Wildcats’ surge toward the postseason. In addition to COVID, she’s had to overcome some personal demons. She takes the field with crosses painted under both of her eyes, which helps her stay strong mentally.

“I struggle with being nervous, like very badly when I go up to bat. When I put the crosses on my face, I feel like that reminds me that God has got me. It calms me down. I don’t know how to explain it. Knowing that He’s the biggest thing,” said Thompson.

“I think my faith just made me to where I don’t give up as easily. A big thing with how I believe is God never gives up on me so I can’t give up on what I love. I feel like that’s pushed me in my attitude to stay strong and keep hoping for the best and having faith that it will all work out for the better. So far it has worked, and this year has been one of the best years for me softball-wise.”

Thompson sports a 3.72 grade point average and said her plans include attending the University of Central Arkansas, major in Life Science and become an optometrist.