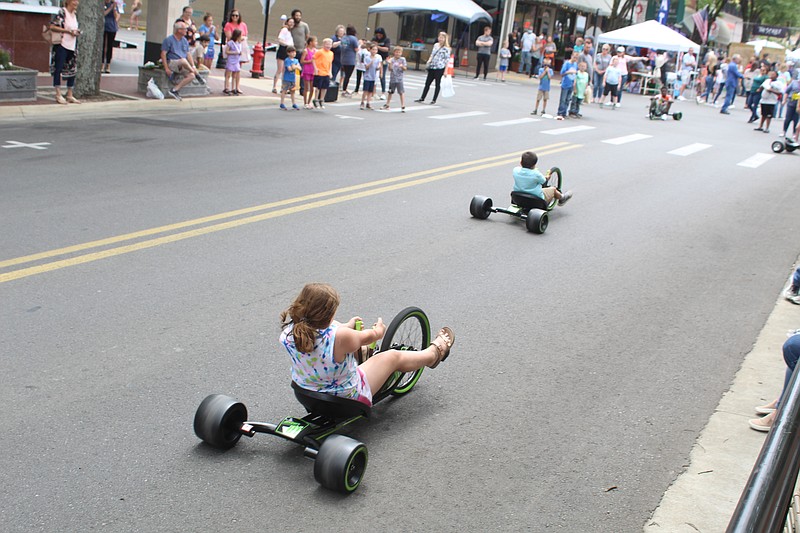 A Big Wheel race was one of several activities during Saturday’s May on Main event. Competition was fierce among the many kids who participated - although several races ground to a stop when one racer stopped to help another who slid to a halt. (Matt Hutcheson/News-Times)

Activities for young and old alike filled downtown El Dorado and the surrounding streets Saturday, starting with opening day at the Murphy Arts District Farmers Market and ending with a concert by the Allman Betts Band at the MAD complex.

Between those were the annual Mayhaw Festival, organized by the South Arkansas Historical Preservation Society, and May on Main, a new festival organized to coincide with the Mayhaw Festival and create a full day of fun for El Dorado families.

Saturday’s Mayhaw Festival saw Jackson and Faulkner streets filled with people, both visitors and local residents, for the first time in more than a year.

“It’s gone really well. We’ve had a good turnout, “said South Arkansas Preservation Society Office Manager Paula Kinnaird, who added that at least a couple thousand people had been through the Festival by noon.

She said the mayhaw biscuit breakfast had ended by 10:30 a.m. once biscuits sold out.

Vendor and information booths lined both sides of both streets; everyone from South Arkansas Community College to the Karl Malone Auto Group to Gethsemane Baptist Church was represented at the festival.

“It’s fun,” said Alexis Willis, 12, who came with her grandmother Jodie Pinckard. Alexis said the Mayhaw Festival was the first big event they’ve been to together in a while, referring to the COVID-19 pandemic’s slow down of large-scale activities.

Alexis got to take a tour of an El Dorado Fire Department fire truck Saturday afternoon. Other first responders, including the El Dorado Police Department and local emergency medical responders, were also on site teaching children about their jobs.

“I think everybody needed to get out. …It’s really good to see,” said Wayne Gibson. “This is a good turnout.”

The South Arkansas Arts Center had a large drawing board, with a collaborative color by numbers on one side, and the other side blank for Festival-goers to express their own creativity on.

“It’s been great so far,” said Kalli Brown, who was at the Festival with her son Raiden Brown, 3, and nephew Gabriel Bexley, 10. “They’ve had a lot of fun getting out. I love when the community does stuff like this, so the kids can get out and interact.”

Camp Fire Troop #42 was also on site, doing face-painting for children. Naomi Aaron could be seen painting a large butterfly on Daleyza Arias, 7.

The Classic Car and Bike Show brought out a number of people, and cars as old as 1950 were seen in the Murphy USA parking lot, where the show was held.

“It’s good; looks good, because of the pandemic, and finally getting back to things,” said TJ Leonard, owner of Mortuary BBQ, who visited from Hampton.

Local musicians in The Broken Turtles played classic rock cover songs through the early afternoon at the Mayhaw Festival’s “Picking Porch” stage, and a second stage on the Newton House lawn had seats available for festival-goers needing a rest or wanting to enjoy the music.

The inaugural May on Main event took over downtown El Dorado on Saturday starting at 11 a.m.

Organized by Main Street El Dorado and Murphy USA, May on Main featured an International Chili Society chili cook-off, a motorcycle poker run and a wide range of activities for kids and adults.

Chili masters came from around the region to test their skills in the chili competition, such as Happy Trails Chili from Texas.

Judging was still ongoing in the chili cook-off around 1 p.m. on Saturday; ICS reps at the festival said judging takes place “until they run out [of chili].”

Attendees willing to pay a $10 fee were able to move from tent to tent sampling the various offerings of chili.

While the chili experts were busy cooking under their tents, other food vendors offered delicacies including funnel cakes, corn dogs and more.

An organized Big Wheel race saw kids of all age groups slipping and sliding down Main Street throughout the day, coinciding with a Baggo tournament and two bounce houses to keep the non-racers busy.

The Kilt even had an axe-throwing range set up in the street where festival-goers could be seen testing their accuracy on the wooden targets.

Live music provided entertainment from a stage directly in front of the Union County courthouse with performances by bands including the Karla Case Band, Black Strap, Zach Abbott and Brody McKinney.

[SEE MORE PHOTOS FROM MAY ON MAIN]