Recoveries outpace new cases for second week in a row 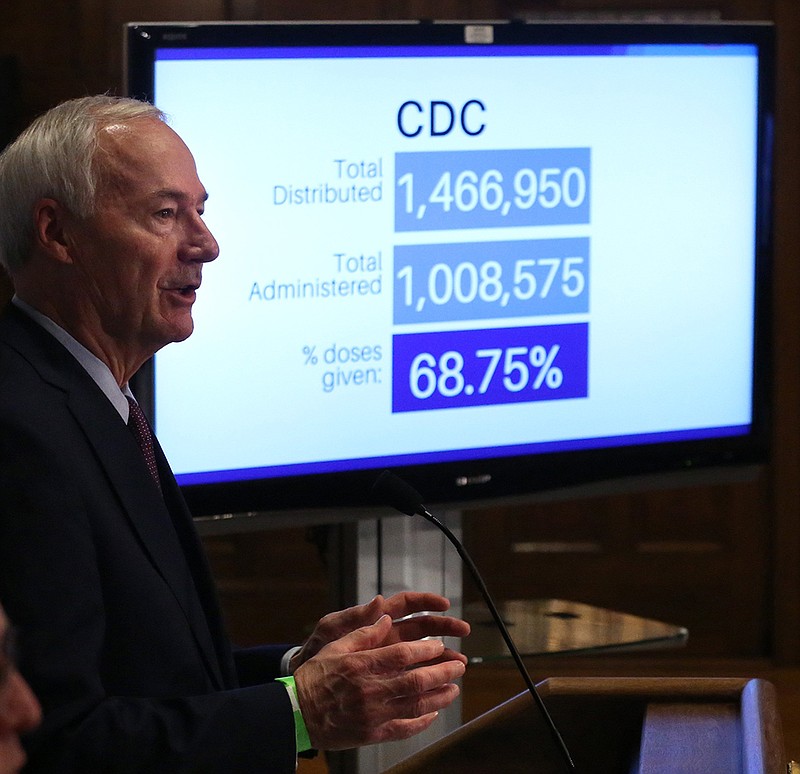 Gov. Asa Hutchinson announces that the state has administered more than one million COVID-19 vaccines during the weekly COVID-19 update on Tuesday, March 22, 2021, at the state Capitol in Little Rock. (Arkansas Democrat-Gazette/Thomas Metthe)

More Union County residents met the criteria for recovery from COVID-19 this week than were diagnosed with the virus.

Since last Sunday, 41 new COVID-19 cases have been identified in Union County, while 45 local residents have met the recovery criteria, according to data from the Arkansas Department of Health.

The most new cases in a single day, 28, were reported by the ADH on Wednesday, when 28 recoveries were also reported; the cases were likely ones that were previously not associated with a particular county.

There were 3,791 Union County residents considered recovered from the virus as of Saturday.

Two local residents died as a result of the virus this week, making 109 Union County residents total to have been killed by COVID; the local COVID mortality rate, or percentage of people who die after contracting the virus, was 2.8% on Saturday.

Throughout the week, the number of active cases of the virus in Union County mostly declined; they were at their height this week last Sunday, when 18 were reported, and fell to 12 by Thursday. There were 12 active cases in the county Saturday as well, made up of 11 confirmed cases and one probable case.

Hospitalizations in the Southwest hospital region of the state, where Union County sits, declined throughout the week, with a high of 19 recorded last Sunday and a low of 13 reported on Friday and Saturday. The number of people in intensive care units and on ventilator support also dropped, falling to two in ICUs and one on ventilator support by Saturday.

The ADH reported Saturday that a total of 115,725 COVID vaccine doses had been administered in the Southwest hospital region, with 11.2% of the region’s population being partially vaccinated and 12.7% being fully immunized.

Additionally, as of March 23, 5,422 Union County residents, or about 18% of the county’s population, had received one dose of a COVID vaccine, and 2,959 county residents, or about 10% of the population, were fully immunized, according to Arkansas COVID, a University of Arkansas School of Journalism and Strategic Media program that has been tracking COVID-19 data in the state.

Between last Sunday and Saturday, 11,100 vaccine doses were administered in the region. Several vaccination clinics were held in Nevada County, which is also part of the Southwest hospital region, last week, and additional clinics are scheduled this week in Union County.

Starting Tuesday and continuing through Friday, vaccine clinics will be held at the Union County Local Health Unit located at 301 American Road. The clinic will be open on Tuesday from 9:30 a.m. to 6 p.m. and on Wednesday, Thursday and Friday from 8 a.m. to 4 p.m.

Those wishing to be vaccinated must make an appointment in advance by calling 1-800-985-6030. According to a flyer for the event, there will be no out-of-pocket expenses for those being vaccinated, though those with insurance are asked to bring their cards.

Gov. Asa Hutchinson, during his weekly COVID update this week, noted that the number of tests being performed throughout the state has been low since severe winter weather hit Arkansas at the end of February. While he encouraged Arkansans to get tested if they are experiencing symptoms of the virus or if they have travelled, he said he thinks the amount of COVID testing in the state will stay “modest.”

Statewide, 1,205 new COVID-19 cases were reported between last Sunday and Saturday. A total of 329,860 cases have been identified in the state, including 259,004 confirmed cases and 70,856 probable cases. Most of the new cases this week — 780 — were confirmed cases, while the remaining 425 were probable cases.

There were 1,695 Arkansans who met the criteria for recovery this week, making 322,195 Arkansans in total considered recovered from the virus. The number of active cases has also declined statewide since last Sunday, when a high of 2,578 was recorded; by Saturday, that total had dropped to 2,032, made up of 1,370 confirmed cases and 662 probable cases.

There were 51 Arkansans who died as a result of the virus last week, bringing the state’s death toll to 5,590, indicating a state COVID mortality rate of 1.7%. Hospitalizations decreased throughout the state’s five hospital regions, starting at 192 on Sunday and hitting a low of 172 on Friday. On Sunday, 176 Arkansans were hospitalized due to the virus, including 71 in ICUs and 32 on ventilator support.

The state surpassed one million COVID vaccine doses administered this week, and as of Saturday, 384,031 Arkansans were considered fully immunized against the virus. All three vaccines available in the United States have proven effective in preventing hospitalization and death from the virus.

Arkansas had received 1,922,880 doses of COVID vaccines by Saturday afternoon and a total of 1,082,207 had been administered.

Since last Sunday, approximately 386,368 new COVID cases have been identified in the U.S. and about 6,327 U.S. residents have died as a result of the virus.

Approximately 3,389,912 new COVID-19 cases were identified worldwide last week, and about 1,919,748 people met the criteria for recovery. There were also approximately 58,831 people who died as a result of the virus.