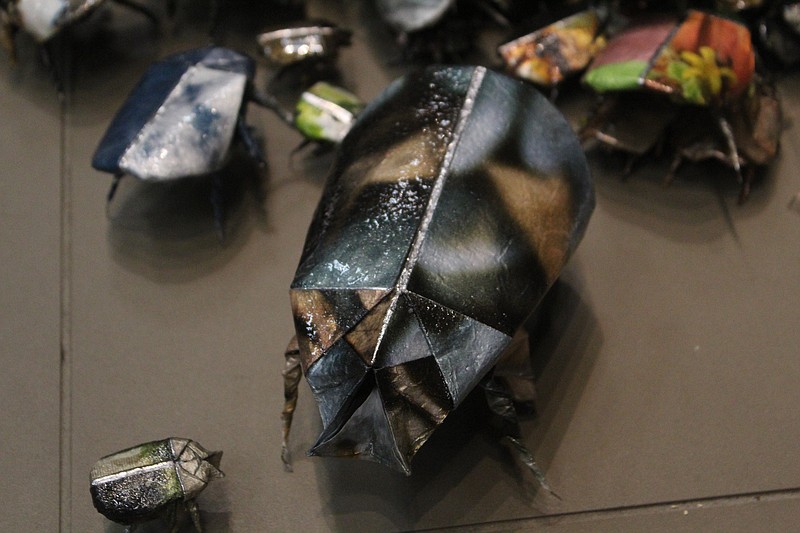 The Women to Watch: Paper Routes exhibition will be on display in the South Arkansas Art Center’s Merkle Gallery from Monday, March 29 until Wednesday, May 26 and includes Joli Livaudais' All That I Love installation.

The Women to Watch: Paper Routes exhibition will be on display in the South Arkansas Art Center’s Merkle Gallery from Monday, March 29 until Wednesday, May 26.

The traveling exhibition features work by four artists showcasing work that utilizes paper as a medium.

Artist Joli Livaudais, an Assistant Professor of Art at the University of Arkansas at Little Rock, is the creator of featured work All That I Love.

The work, as described in Livaudais’ entry on the Arkansas Committee National Museum of Women in the Arts website, “consists of 1,200 origami paper beetles of varying sizes made of aluminum, pigment ink, resin, and kozo paper.”

Livaudais’ All That I Love was the ACNMWA’s 2020 Women to Watch national submission and was installed at the National Museum of Women in the Arts in Washington, D.C. from last October until January 2021.

Livaudais was busy installing her work on Thursday at SAAC, but took time to describe her process of creation and how her work in photography subtly factors into the installation.

Each origami beetle in the installation is created from a photograph printed on paper, and the SAAC exhibit features origami beetles crawling along the gallery floor and walls.

The work took about two years to complete. Livaudais said each beetle takes approximately one-and-a-half to two hours to fold and complete.

The beetle’s feet are outfitted with needles to allow them to be placed on gallery walls and ceilings.

Livaudais initially worked with photography but was inspired to pursue ways of utilizing photographs in physical art.

“I’m a photographer primarily, but I started working with photographs and trying to see if I could make them 3D or what I could do to turn [photos] into an object. I started playing with origami in 2012, but I’ve been a photographer for a long time… It’s interesting to me - at what point does it stop being the image and start being the object?” Livaudais said.

Livaudais added that the installation is site-specific, and changes based on the layout and available space in each gallery, meaning each gallery gets a unique version of the exhibit.

Other artists featured in Women to Watch: Paper Routes include Kim Brewer with the Rosebud Moments series, Linda Nuygen Lopez with Start/Never-ending and Suzannah Schreckhise with Who’s on our Money?

See photos of the installation of All That I Love