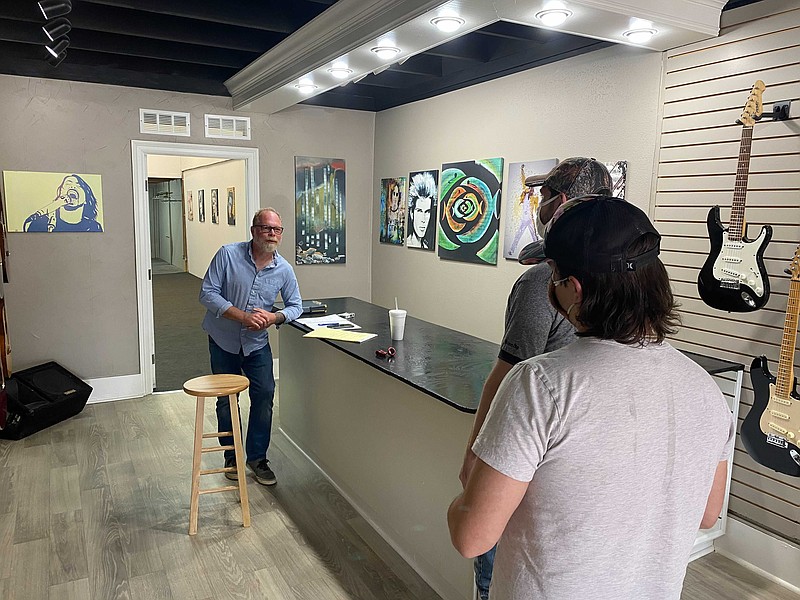 Kevin Barker speaks to guests as they peruse his new music store, Vintage Sound. Set to open in May, Barker said that the store will host a variety of musical instruments and equipment. (Rhett Gentry/Banner-News)

Portraits of Freddy Mercury, Dave Grohl and multiple other artists in the music industry share the walls with acoustic and electric guitars in Magnolia’s new music store Vintage Sound, which is set to open some time in May on the Square.

Next to Magnolia Nutrition, the new store is owned by former Central Hub owner Kevin Barker, who is no stranger to the music scene.

“When I was building Central Hub, I spent $600,000 of my own personal money to build that place. And I did it to bring music to Magnolia,” said Barker, “I had 84 concerts in that building. I had everybody from local people to as big as Motley Crue.”

When asked why he made the move to open up a music store in Magnolia, Barker said that it came down to the availability of music-related equipment in town.

“There are so many musicians in town and we have to travel to Texarkana to really get anything,” said Barker, “(At Central Hub), we were having so many bands and so much music equipment that when something broke, we couldn’t get anything. I was going to Texarkana and getting extras of everything. It made me realize it would be nice if there was somewhere close to buy this.”

Barker said that one of the problems with going to music stores in Texarkana is that they rely on inventory from vendors and typically only sell one brand of instruments. A musician himself, Barker said that his inventory of guitars comes from his personal collection that he purchased over the decades that will soon be available for the public to purchase.

Currently, Barker is preparing the store by shelving items and finishing up renovations. He said he plans for the store to be open Tuesday through Saturday from noon to 6 p.m., selling instruments, amplifiers and music accessories with live music a couple of nights each week. Despite all the work, he said that he is not concerned if the store does not bring a return on his investment.

“I’ve never done anything in my life for money. I only do things that I love and then its like you never work and the money will come. It doesn’t matter if I make a dollar or 10 million dollars, it’s not about the money at the end of the day,” said Barker.