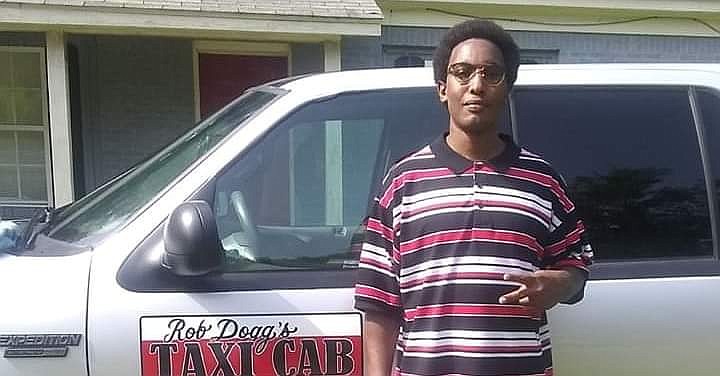 Robert Moore’s Rob Dogg’s Taxi Cab Service operates out of El Dorado. Moore recently completed expensive repairs on his cab which allowed him to get back in business. (Contributed)

El Dorado-native Robert Moore’s dream of owning and operating a certified taxi service is a goal that he’s been working towards for years but that has only recently reached fruition.

“I started when I was around 16, but didn’t have money for all the credentials. But, what I did is just do it until I was able to save enough money up. Once I did, I got credentials and everything to open my business,” Moore said.

When he first started out, Moore saw the job as something to do in his free time.

“It was really just something fun to do, but everyone kept telling me to get a license to do it for real, that it could be a nice legitimate business. I brainstormed and went to city hall to talk and learn; they helped me with a brochure to read and things like that. And I just kept saving money,” Moore said

Moore actually obtained his certifications for operating in Union County and the entire state last August, but needed repairs, including an entirely new engine for his vehicle, prevented him from beginning in earnest until recently.

Now, Moore is officially in business with Rob Dogg’s Taxi Cab Service. The name comes from Moore’s nickname, which was given to him by his best friend as a teenager and has stuck with him ever since.

His clientele so far ranges from visitors in need of a ride from the airport and older people needing a drop-off at a doctor’s appointment to younger people simply looking to get from point A to point B.

“I have older people, younger people; a lot of different people call. People call regularly from the local airport, needing to go to a motel… I take people to doctor’s appointments and just try to help everywhere I can help at,” Moore said.

His taxi service charges $20 for a ride anywhere in El Dorado with an additional $2 charge for each stop made along the way. He is also certified and willing to work across Arkansas.

For now, Moore runs his taxi service alone, taking calls and picking up riders in his Ford Expedition. However, he has plans to expand beyond the taxi service into other ventures.

“Soon I’m going to open a limo service and a roadside assistance service for El Dorado and the surrounding community. We don’t have much like that around here, so I want to get a few cars around here to help people who break down,” Moore said.

He also plans to make the service into a family affair.

“I have a son who is about to be 15, so in another year or two I want to teach him everything I know and hopefully he’ll start driving [a taxi] too,” Moore said.

Moore said his certifications allow him to eventually add up to 12 cars to his service and hire other drivers.

Although he looks forward to expanding and reaching his future business goals, Moore said that, for now, he is excited to provide his taxi service in El Dorado.