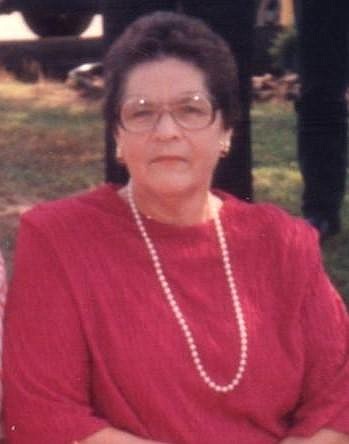 Vertia Mae Frisby Smith of Norphlet, Arkansas, was born on March 18, 1935 and left this world peacefully on June 9 2021 at her home.

Mae, as she was known by her family and friends, was the eldest child born to Lawson Lee Frisby and Othel Lee Fitch Frisby, who both preceded her in death. Mae was also preceded in death by her husband, Allen Travis Smith of almost 65 years, her only son Raymond Allen Smith, two brothers, Walter Frisby and Donald Frisby and three sisters, Nancy Frisby, Linda Frisby Robbins, and Lois Frisby Pannel. Mae is survived by her two daughters, Wanda Young and Darlean Hutchison both of Norphlet, and by her grandchildren Stephen Garner, Brian (Olivia) Garner of El Dorado, Dan (Stephanie) Nash of Ohio, Jason (Taylor) Young of Junction City, Michoal (Jessica) Young of Fordyce, and Sabrina (Scotty) Warner of Fordyce. Mae was Meemaw to eight great-grandchildren Callie, Christian, Noah, Marc, Scott, Sidney, Graham and one more very special grandchild. She is also survived by three brothers, Robert Lee (Myrtle) Frisby of Many LA, Gary (Debbie) Frisby of Bonita, LA, Lamar (Flo) Frisby of Dermott, AR and five sisters, Mary Freeman of Sheridan AR, Earlene Herring of Jones, LA, Dianne ( I.V., Jr.) Barthol of Bastrop, Shirley (Owen) West, and Sharon (Little Bob) Jones of Jones, LA. Mae was also aunt to a host of nieces and nephews, and especially niece Tina Brown, who loved her dearly and called Mae her second Mama.

Mae was a homemaker, a devoted wife, mother and grandmother. Her family was her world and she loved them with an unconditional love matched only by the love of her Lord and Savior Jesus Christ. She was a woman of faith and she loved listening to praise and worship music. Mae was also a woman who loved to fish, to farm and to plant flowers. Her thumb was green and her casting arm was strong. She once caught a thirteen pound Striper bass at Toledo Bend Lake. Her brother Robert Lee told her “Sister, if you can land him, you can keep him”. She landed him and proudly hung him on her wall for many years.

Mae, Mama, Meemaw and Sister will be greatly missed by her family. She was the most happy when she was surrounded by her brothers and sisters, children, grandchildren and great-grandchildren. But we also know that she had a great reunion day on June the 9th with her husband and her family already passed on.

Pallbearers will be her five grandsons, Stephen, Dan, Michoal, Jason and Brian and son in law Randal Garner. They were her “boys” and she was very proud of them.

The family will receive visitors on Friday at 109 Lion Street in Norphlet from 6:00 to 8:00PM. Graveside services will be at Silver Hill Methodist Church cemetery in Mt. Holly, AR at 11:00 AM on Saturday, June 12th officiated by Pastor James Fout under the direction of Perry’s Funeral Chapels. Flowers are welcome and in lieu of flowers, donations can be made to The American Cancer Society, 107 Nevada 2785, Rosston, Arkansas, 71858.