It’s all in the details for ‘Steel Magnolias’ 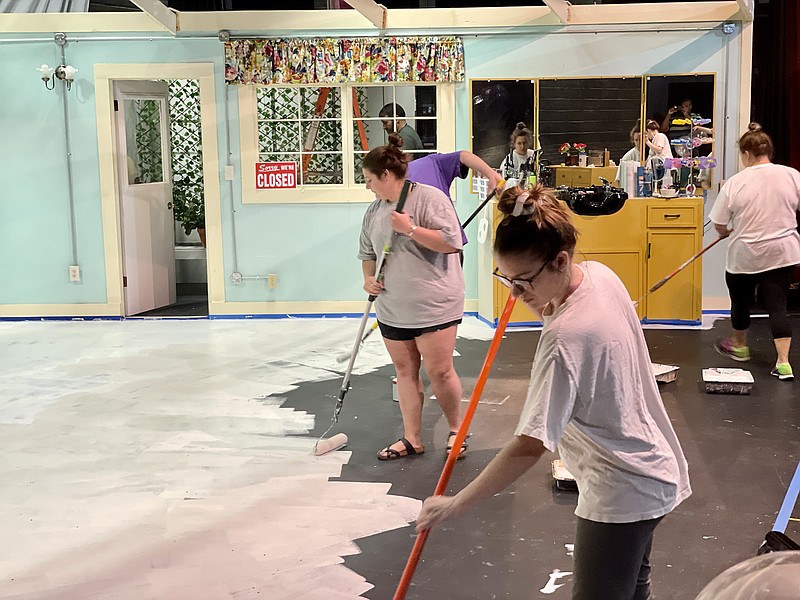 The production team and cast of South Arkansas Arts Center’s production of “Steel Magnolias” are in the midst of finishing the set of the upcoming play.

The group has been hard at work getting everything ready, not only for the show itself but so the cast can have rehearsals that will closely reflect the atmosphere and set that they will be performing in.

The details that have gone into the set, lights, sounds, props and more are all intentional. Show director Tripp Phillips, who got involved at SAAC when he was ten years old and who has dedicated most of his life to the craft of storytelling, acting and theater, said the choices made for the show were made with the audience in mind.

“We’ve gone through a lot of trouble to have an accurate set,” Phillips said. “From all the beauty paraphernalia, to the wigs and hair, as well as the two women who will play beauticians so they can convincingly do the hair and manicures on stage. We want to make it so that the audience feels like they are seeing a slice of life.”

Phillips had to spend a significant amount of time away from what he loves doing this past year because of the COVID-19 pandemic. He was living in his New York apartment when the pandemic first struck.

“I don’t think any of us were prepared mentally, emotionally or financially for what this was going to be,” Phillips shared. “Even the flu pandemic of 1918 didn’t shut Broadway shows down, so I’ve tried to make the best of it. But it has been difficult.”

To help pass the time, Phillips said he’s been working on a book, binging Netflix and, fortunately, was able to assist his family in south Arkansas with tidying up the family home. But being brought on to direct a big production for a place that means a lot to him and that gave him his start as a thespian was welcome in the midst of uncertainty.

Phillips actually oversaw a different adaptation of “Steel Magnolias” during his time running a community theater in Pennsylvania in 1991. He says he appreciates the show and the story of the characters being told.

“The play is about these six women. Steel, meaning tough when they need to be, and magnolias, meaning delicate and feminine on the outside — that’s what the metaphor of the title is,” Phillips said. “It is a wonderfully well crafted play and 85% of it is very funny and very charming and there is one section that is quite dramatic. People will cry a little bit I hope, if we’ve done our jobs and you laugh through the tears. That’s what one of the characters says, ‘laugh through the tears,’ and that’s what I hope the audience will be able to do.”

Another essential member of the production team is Shawn Dartez.

Dartez is the production’s master carpenter and has a career as a processing engineer. He got his start helping at SAAC years ago when he moved to El Dorado.

“When I first moved here, I ended up living next to Darrin Riley who used to work at the SAAC, and he got me and my wife involved,” Dartez said. “We came down and helped with a few sets and I guess they saw that I can do some things and when you do a good job, you’re recruited to come back and help out some more.”

Because of the attention to detail that comes with this show, Dartez talked about some of the biggest challenges he faced when helping to construct this set.

“We had to get some running water on stage, so that was a unique thing,” Dartez said. “Usually, water on the stage doesn’t mix — it ruins the floor — so we had to consider that. It essentially is a bird bath, so we bought all the parts to make a bird bath and now we have a sink for running water so the actors can actually wash hair during the show.”

Even with all the challenges that sometimes come with “barn raising,” as Dartez calls it, or putting together a set, there’s a lot about the process that he enjoys.

“Once we had everything up, it was like now I know what this thing is going to look like,” Dartez explained. “It gives you a real sense of the work you have to do and you get a great sense of accomplishment when you put up several hundred pounds of wood. You’re like, ‘hey, I really did something.’”

Dartez said he has a specific hope for viewers once they see the show.

Sound and where the sound is coming from on stage is another big piece of this production. Jacob George is the sound engineer for the show and is adding features to positively impact the audience experience.

“We want to be very specific about where sounds are coming from,” George said. “So, for example, on top of one of the cabinets, a radio is going to be placed and a speaker will be hidden in the cabinet so that when it is time for the radio to be playing, it will sound to the audience as though what they’re hearing is actually coming from the radio.”

George also talked about how he will be able to control the sounds that playgoers will hear above and all around them with his laptop and new technology SAAC has invested in.

“I can be playing music from every speaker and then have a dog barking from a speaker right above us,” George said. “I really think what we’re doing with sound is going to also enhance the viewer’s experience.”

All of what the production team and cast have been working on can be seen and heard the weekends of June 17-20 and June 24-27. For more information or to purchase a ticket, visit saac-arts.org or call 870-862-5474.