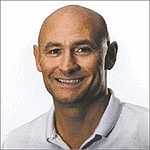 On Saturday, June 5, 2021, Clark E. Ray died peacefully in his sleep at his home in Washington, DC. Born November 17, 1963, in El Dorado, Arkansas, he was a kind, thoughtful, selfless, and compassionate leader with a sense of optimism that when married to his deep convictions, made him a true change-maker. His focus on making life better for every child made him a real-life hero.

In 1986, Clark graduated from the University of Arkansas at Fayetteville with a bachelor’s degree. He then earned a master’s degree in Education focused on Sports Management from Temple University.

A champion for children, Clark’s career began in the classroom as a teacher and culminated in his service to the children of Washington DC in a variety of public service roles. He served four DC mayors, including his appointment as the director of DC Parks and Recreation. In his final professional position, Clark created and served as executive director of the DC State Athletic Association which coordinates school athletics programs in DC public schools, public charter schools, and private and parochial schools.

Clark’s career included the hard, political work it takes to make change for all kinds of people in communities across the country. He joined the famous 1992 Clinton Gore presidential campaign ultimately travelling the country in support of Vice President and Tipper Gore. After the historic campaign win, Clark was appointed to positions at the US Department of Agriculture and the White House Office of the Vice President and Tipper Gore. In addition, he served as chief of staff to Tipper Gore for the Gore 2000 Campaign. In 2009, Clark ran an energetic, but unsuccessful bid for an at-large seat on the DC City Council.

Survivors include his beloved husband, Aubrey Dubra, and their four sons, Rahmeer, Tajon, Jamar, and Richard, all of Washington, DC; his mother, Gerry Ray, brother Mike (Rhonda) and nephew Dakota Ray (Callie) of El Dorado, AR. He is also survived by his niece Nicole Ballard (Grant) and their children of Smackover, AR, loving in-laws and many devoted, dear friends.

Public visitation will begin at 10:00 a.m., Saturday, June 12, 2021, followed by a Celebration of Life at 11:00 a.m., at the Southeast Tennis and Learning Center, 701 Mississippi Ave. SE, Washington, DC, followed by burial in Ft. Lincoln Cemetery.

In lieu of flowers, the family requests donations to the Partners for Kids in Care. Contributions by check made payable to the DC Child & Family Services Agency (CFSA) denoting the donation is in memory of Clark Ray. Arrangements by Stewart Funeral Home.