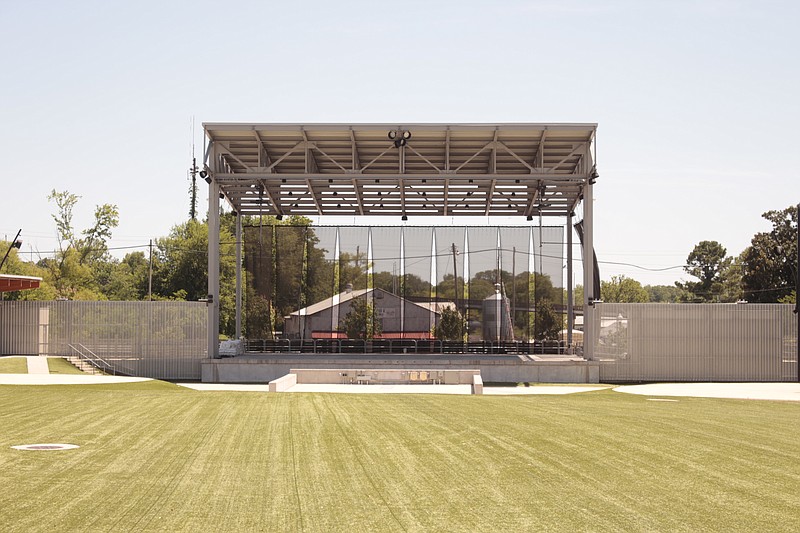 The MAD Amphitheater is seen in this News-Times file photo.

The headliners have been announced for MusicFest XXXIV, and while the Murphy Arts District is handling the music, Main Street El Dorado is putting the “festival” into the event.

Country music singer-songwriter Frank Foster, who has performed in El Dorado several times, will headline the first night of MusicFest on Oct. 1 with opening act Pryor and Lee, who have appeared on “The Voice,” the singing competition TV show.

The concert will be held in the First Financial Music Hall.

Hip-hop legends Snoop Dogg and Bone Thugs-N-Harmony will anchor the second leg of the festival on Oct. 2 in the MAD Amphitheater.

Players with the SouthArk Stars’ basketball teams will also be on hand for demonstrations.

Additionally, planning is underway for the Miss MusicFest Pageant, which is open to contestants ages 0 to 18. Details about the pageant are forthcoming, Beth Brumley, executive director of Main Street El Dorado, said Tuesday.

MSE started MusicFest in 1988 as a way to draw visitors to downtown El Dorado, which, at the time, was undergoing a major revitalization.

The effort was spearheaded Richard and Vertis Mason, local business and property owners, who helped to transform the city’s Central Business District into a bustling, award-winning destination for El Dorado.

MSE and downtown merchants, who were looking to organize a major festival for El Dorado and South Arkansas to draw more attention to Union Square, took a suggestion from Vertis Mason to launch an event that centered around music.

Enter MusicFest, which grew into the city’s largest annual event — drawing, at one time, an average 10,000 to 12,000 people downtown each year — and became an award winner in its own right, having been named Festival of the Year by the Arkansas Festivals and Events Association six times.

The festival started out as a one-day affair that was expanded into a weekend event as it grew in popularity and organizers expanded their marketing reach in north and central Arkansas, north Louisiana, east Texas and west Mississippi.

MusicFest would kick off late Friday afternoon and roll into Saturday night.

For a short time in the early 1990s, the festival was extended to Sunday and included gospel music performances from noon until 6 p.m.

The effort was fleeting, however.

Organizers said they realized MusicFest could not sustain a third day because it was difficult to pull crowds back downtown and church-goers away from Sunday worship services and special programs, which can go on into the evening.

MusicFest has gone through many iterations over the past three decades, having reached its current format in 2017 with the launch of MAD.

As El Dorado Festivals and Events, Inc., developed the new entertainment district, MSE agreed to allow MAD to take the lead in bringing music and other live shows and entertainment to El Dorado.

The two nonprofit groups teamed up in 2017 to present MusicFest for MAD’s multi-day grand opening celebration, with MAD concentrating on the music and ticketed activities and Main Street stepping in to create a festival atmosphere on the downtown square.

“We’re going to do what we do downtown with MusicFest,” Brumley said as the MSE board of directors discussed the festival and other upcoming events Tuesday.

The “festival” portion of MusicFest will be held Oct. 2. Admission is free and some activities will be paid.

Brumley called for a meeting of the MusicFest planning committee, saying that plans for the event are “nearly 50% complete.”

MAD announced earlier this week that Foster will join Snoop Dogg and Bone Thugs on the MusicFest talent roster, she noted.

The rappers were initially slated for a show at MAD in April 2020 but due to the coronavirus (COVID-19) outbreak, the event was postponed until October 2020.

As the virus raged on and surged last fall, MAD announced that the show had been postponed again and that Snoop and Bone Thugs would headline MusicFest 2021.

For more information about MusicFest “festival” activities, call the MSE office at 870-862-4747.