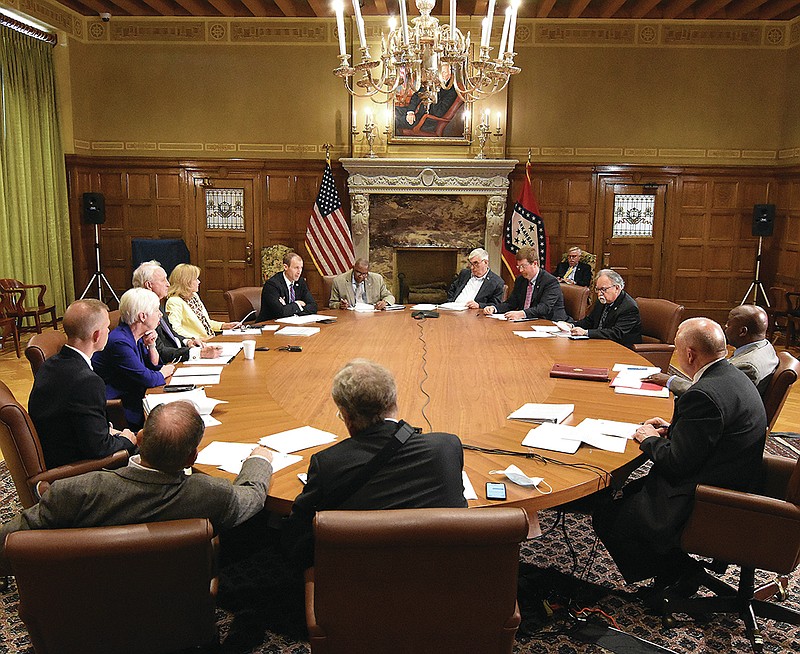 A state panel that was formed to recommend to Gov. Asa Hutchinson the state’s best uses for $1.57 billion in federal American Rescue Plan funds on Wednesday endorsed providing $150 million of it for state broadband grants.

State Department of Commerce officials presented to the 15-member American Rescue Plan steering committee a request for $300 million of the federal funds for broadband grants and administrative costs. The steering committee, appointed by the Republican governor, consists of nine state department secretaries and six state lawmakers.

With no audible dissenters, the steering committee approved a motion by committee member Stacy Hurst — who is secretary of the state Department of Parks, Heritage and Tourism — to recommend that the governor approve $150 million for the Department of Commerce’s Arkansas Rural Connect Broadband Grant Program.

Hurst said the $150 million would cover $30.7 million in broadband grant applications already approved but not funded, and $114.7 million in other broadband projects that don’t meet the technical requirements for funding under the American Rescue Act. State officials plan to work with the projects’ Internet service providers to help meet the requirements.

She said the steering committee could reconvene “as quickly as possible when we have more information about how we can obtain a consultant to help guide our broadband efforts,” and then consider the Commerce’s Department’s request for the additional $150 million or more for broadband grants.

Committee member Sen. Keith Ingram, D-West Memphis, said he wants the state’s spending of the federal funds on broadband grants to have an overall plan and strategy.

Committee member Mike Preston, who is the commerce secretary, said the department’s request for $300 million is “a safe number that gets us going.” Steven Porch, chief legal counsel and executive broadband manager for the Commerce Department, said in a memo dated Tuesday to steering committee chairman Larry Walther that the department’s broadband office submitted the request for $300 million with “both the approval of the Governor and favorable review by the Secretary of Commerce.”

The Arkansas Rural Connect Grant Program awarded $113.5 million in federal coronavirus relief funds and $4.5 million in state funds to 76 projects, department spokeswoman Alisha Curtis said in advance of Wednesday’s meeting. So far, 43 of the 76 projects have been completed, she said.

He said the department also anticipates receiving $150 million in requests for other broadband projects, so that’s why the department requested $300 million.

In addition, Porch said Hutchinson is submitting a request to the U.S. Treasury to clarify its interim final rule regarding broadband and, if needed, to grant a waiver to Arkansas over the rule.

The Treasury’s interim final rule could be interpreted to exclude fixed wireless facilities and only allow wire-line and fiber facilities, he said.

“Because of Arkansas’ topography and low population density in rural areas, excluding wireless facilities would be a hardship and greatly increase the cost of broadband projects and reduce the number of projects that could be funded,” Porch wrote in his memo to Walther. “If Treasury affirms that wireless facilities are excluded, we will request a waiver of that exclusion and a modification of the final rule when promulgated.”