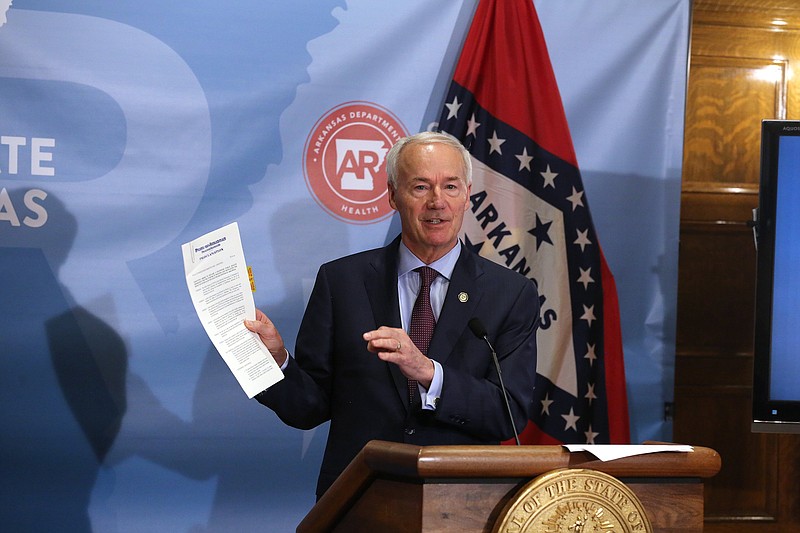 Gov. Asa Hutchinson shows the shows the proclamation reinstating the public health emergency in the state during a press conference on Thursday, July 29, 2021, at the state Capitol in Little Rock. More photos at www.arkansasonline.com/730gov/ (Arkansas Democrat-Gazette/Thomas Metthe)

Gov. Asa Hutchinson announced Thursday afternoon that he planned to call a special session of the state legislature to amend Act 1002, a ban on mask mandates for state and local government entities, including public schools.

He also said he had reinstated a statewide public health emergency with regard to the ongoing COVID-19 pandemic, which will stay in effect for 60 days.

"Any time you're having staffing shortages in hospitals; whenever, today, we're having, I believe it is, four COVID patients that are waiting in ambulances to be able to find a hospital to go to -- that constitutes an emergency and a public health crisis," he said.

The announcements came as more than 2,800 COVID-19 cases were added to the state's total and active cases rose above 17,000.

"This is not a good day," Hutchinson said. "I would emphasize that number -- 2,843 -- is one of the largest days that we've seen since the pandemic started. ... This is a stress point for us, knowing that that's going to lead to additional hospitalizations down the road."

"I'nm directing our Department of Health to take the steps necessary to ease that licensure even more so that we can increase our staffing in the hospitals and for those in need," he said.

He also said he's asked for federal assistance, and that the White House Surge Response Team would be coming to Arkansas to help strategize ways to maximize the available hospital space in the state.

"The second announcement is the issue that I'm very concerned about, which is the children in our school systems that are 12 and under that are not eligible to be vaccinated. Everyone else, it's a decision that can be made with their parents or individually that the answer to the public health concerns is simply to get vaccinated," Hutchinson said.

He said he'd already spoken with Speaker of the House Matthew Shepherd, R-El Dorado, and Senate president pro tempore Jimmy Hickey, R- Texarkana, and he would likely call the session next week.

"They have expressed to me that it's going to be a heavy lift to get passage of this in the legislature, but I have confidence that as the legislature looks at this, they will understand one, that it's a conservative principle to utilize local decision-making, and not everything fits statewide; and then secondly, that this is necessary, really, for providing local school boards the ability to protect those most vulnerable young people."

Hutchinson noted that 24 children with COVID-19 are currently in the Arkansas Children's Hospital, including five in the intensive care unit and two on ventilators. None are fully immunized he said, including 12 who are under 12 years old who are not eligible for vaccination.

"There will be no statewide mask mandate imposed by me, and the legislature, of course, has made that clear as well. This is not about a debate about mask mandates for those that can make their own decisions and have means to get vaccinated; this is a discussion about the school environment ... and for the children they have responsibility to protect," he said.

"There's no discussion about restrictions on business, mandates on businesses; we are wide open in Arkansas. We're going to be doing business in Arkansas. We have to live with the threat of the virus," the governor added. "This is all about the children and their health."

"It's unfortunate that Governor Hutchinson is taking away the choice from parents on how to protect their children and instead is going to allow big government mandates against the will of the people of Arkansas," Garner said.