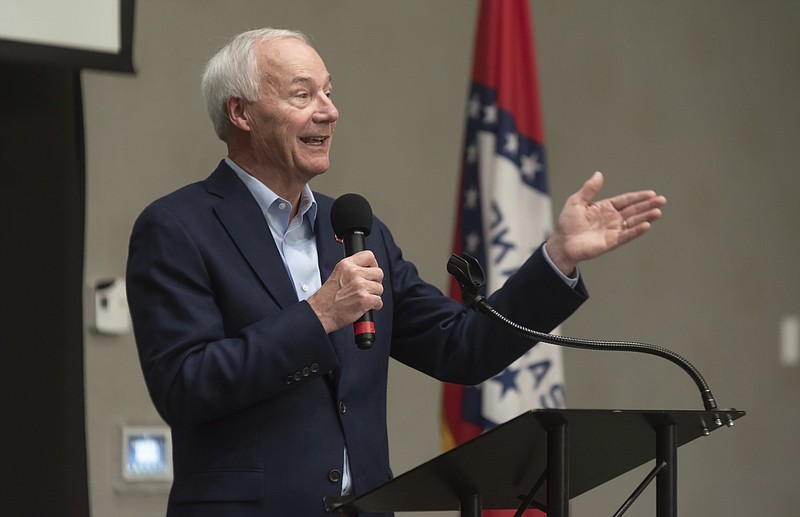 In this July 15, 2021, file photo, Arkansas Gov. Asa Hutchinson speaks during a town hall meeting in Texarkana, Ark. A group of Democratic lawmakers in Arkansas, which has the nation's highest COVID-19 rate, urged the governor and Republicans who control the Legislature on Thursday, July 22, 2021, to lift the state's ban on schools and government entities requiring people to wear masks. (Kelsi Brinkmeyer/The Texarkana Gazette via AP, File)

LITTLE ROCK, Ark. (AP) -- A group of Democratic lawmakers in Arkansas, which has the nation's highest COVID-19 rate, urged the governor and Republicans who control the Legislature on Thursday to lift the state's ban on schools and government entities requiring people to wear masks.

The lawmakers from Little Rock and surrounding Pulaski County asked Republican Gov. Asa Hutchinson to call a special session of the Legislature or for its GOP leaders to reconvene it themselves to consider the repeal.

"Our frontline workers are re-living long, difficult hours of doing whatever it takes to care for COVID-stricken patients as hospitals are at or very nearly at capacity," the lawmakers wrote in a letter to the governor and Republican legislative leaders.

The plea comes as the highly infectious delta variant causes rates to rise around the country, particularly in places where people have been most resistant to getting vaccinated.

The rolling average number of daily new cases in Arkansas has increased by 121% over the past two weeks, according to figures compiled by Johns Hopkins University researchers. The state on Wednesday reported 1,459 new COVID-19 cases and 33 new hospitalizations from the disease.

Only 35% of the state's population, including children younger than 12 who aren't eligible, is fully vaccinated against the virus. That lags behind the national average of 48.8% and far behind the state with the highest vaccination rate, Vermont, where more than two-thirds of the population -- 67.1% -- is inoculated.

Hutchinson signed the mask mandate ban in April, a month after he ended the state's mask requirement. The Legislature isn't set to meet again until the fall, when it will convene to focus on redistricting.

Hutchinson, who has been holding town halls around the state about the vaccine, said his focus is on getting more people vaccinated.

"The best tool to fight the delta variant and have a safe school year is to increase the vaccination rate in the state," he said in a statement. "I have not had any local school leaders reach out regarding an amendment to the law prohibiting mask mandates."

The Democrats asked that the ban be lifted "in a manner that respects the will of the Legislature, the health of our people, and the importance of locally informed responses."