‘Running into the sky’ 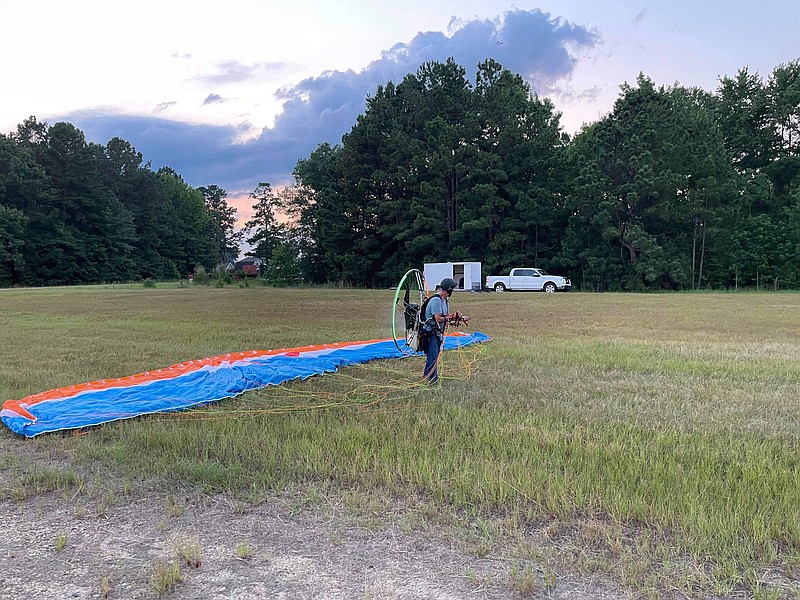 Don Guthrie prepares to take off into flight on his powered paraglider on Monday, July 5. He calls the process, which requires a running start before the motor and wind combine to life him into the air, “running into the skies.” (Courtesy of Johnathan Estes)

Last Monday afternoon, I took a ride around town, and as I headed toward the Highway 82 exit on the bypass, I looked in the air and did a double take. 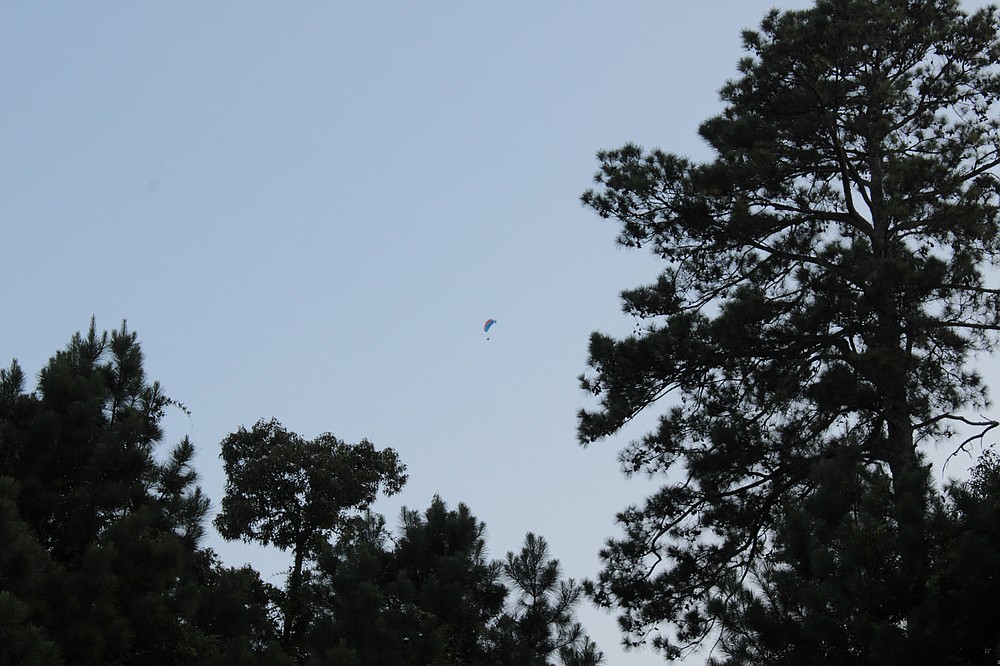 Was it a bird? Was it a plane?

No; it was Don Guthrie flying around El Dorado a thousand or so feet off the ground in a contraption I’d never seen before in person.

“It’s a paramotor,” Guthrie explained in a phone call Wednesday afternoon. “Or, also known as a powered paraglider.”

Resembling a parachute from a ground-view, the powered paraglider is made up of two parts: the wing, which is made of fabric like a parachute; and the motor, which is powered by regular gasoline one can buy at any fueling station.

“A lot of people show up at the airport and say ‘where is the airplane you jumped out of?’” Guthrie said.

Guthrie has always been interested in aviation. Once he could afford it, he started taking flying lessons at the South Arkansas Regional Airport.

“I started going to that school in 2000, 2001, started flying airplanes, and to fly an airplane, you have to do all these certifications, you have to have a license, you have to get so many hours in an airplane,” he said. “I did that for a while and never really progressed enough to get a private pilots’ license.”

Besides the time investment getting a pilots’ license requires, there’s also the monetary cost – Guthrie said to rent a plane from SARA for an hour-long flight with an instructor costs $200.

More recently, Guthrie stumbled on some videos of people flying powered paragliders on YouTube. Around the same time, a friend in Louisiana posted on social media that he was flying in a paramotor.

Guthrie decided it was time to take to the skies again.

“We can still go to a school with someone with a lot more experience. My instructor there taught me how to fly – three days of school and I was flying on my own,” Guthrie said. “The school has all the equipment, all the gear that a person needs, so you go to the school, you fly all his gear; that gives you an idea when you purchase your own gear. It just kind of gave me an idea of the gear I wanted to buy because I had flown several different motors.”

Guthrie said the initial investment, purchasing the paramotor equipment, is the most expensive part of his hobby. Wings cost about $2,500 and the harness and motor can range from about $2,000 to $4,000. 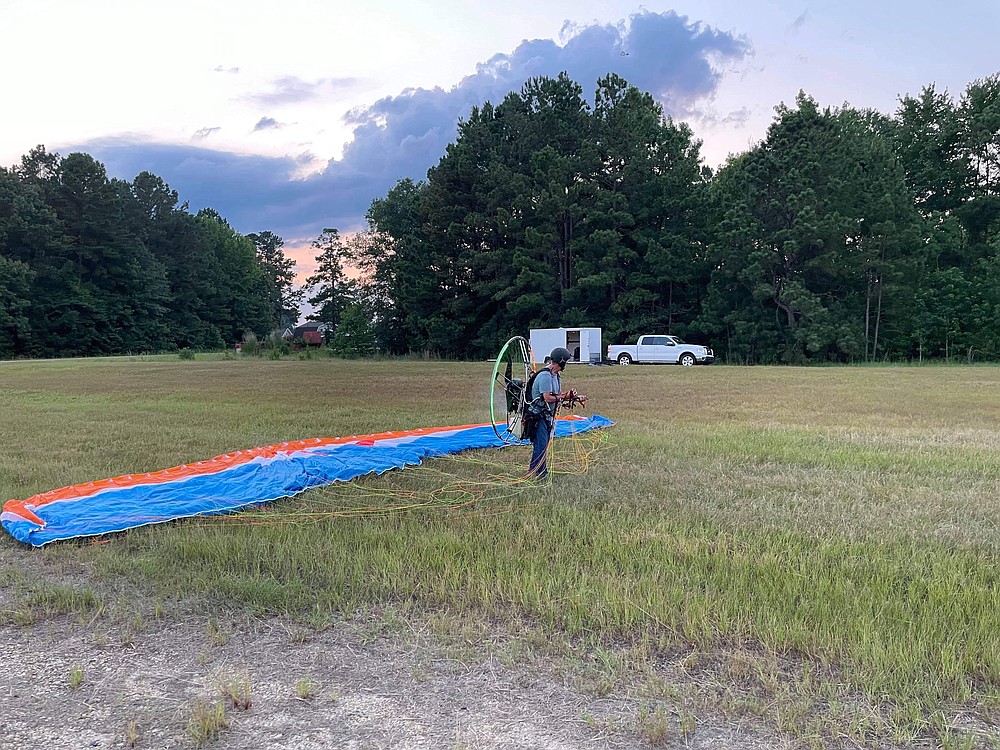 Don Guthrie prepares to take off into flight on his powered paraglider on Monday, July 5. He calls the process, which requires a running start before the motor and wind combine to life him into the air, “running into the skies.” (Courtesy of Johnathan Estes)

He noted that he also has a few accessories that make flying even more fun, including a smoke machine that can shoot out a white jet of smoke, similar to an airplane, and a string of LED lights that can strobe and make any number of different lighting configurations.

“The LEDs …. have thousands of different combinations of lights that I can make do whatever I want them to do. One is an American flag; I can make it look like my paramotor’s on fire; I can make them strobe different colors,” he said. “Not all of them have it, that’s just extra stuff you can buy and put on there; like the smoke machine, that’s just an accessory that you can buy. There are lots of accessories; they’re selling all kinds of crazy stuff for these things.”

One doesn’t necessarily need to travel far to buy their own equipment for a powered paraglider, either; Guthrie said he bought his wing from a person in El Dorado, and Oglee ordered his motor for him, though it did travel some ways to get here.

He did note that he has since made a friend in Texarkana who sells the motors as well, so now, he could always get another motor without having to wait for its arrival.

The powered paraglider is actually a pretty simple vehicle, even for those flying it, Guthrie said.

The motor itself runs on gasoline, and Guthrie’s tank holds four gallons, which can give him, conservatively, about three hours in the air.

“I could fly and not have to worry about running out of gas, probably, I’d say three hours. That’s giving myself a little bit of margin; I normally tell people I could fly about four hours, but I normally land before then because I always want to have fuel in the tank,” he said.

“Most people have to use the bathroom before that time’s up, so you’re going to land anyway,” he added, laughing.

The paramotor flies at altitudes between 1,000 and 2,000 feet above ground, another reason Guthrie cited for not staying up too long – it can get cold at those heights.

Trips don’t have to be short, though; Guthrie said he knows others in the tightknit powered paraglider community who sometimes go on what they call “cross country” trips.

“A lot of guys will do cross country flying where they’ll go from one airport to another airport, land, go into town, go get some food, put gas in the tank and then fly again,” he said. “So you can go longer.”

The harness with the motor also has a seat attached; once a person is in the air, the seat can unfold to give the flyer a place to sit, basically like a lawn chair, Guthrie said.

Maneuvering the paramotor isn’t too difficult either, he said; there’s a throttle to control the motor itself, which determines one’s altitude, and right and left brakes on the wing to let the flyer turn in either direction.

Taking to the skies

Guthrie usually starts and ends his flights from Stevens Field at the El Dorado Downtown Airport. He can fly from other locations – soccer fields, baseball fields, sometimes other local residents’ properties if they have enough space clear of hazards like powerlines and trees – but he likes using the airfield most of the time.

“For me, it’s a no brainer when I have an airport,” he said. “I’m not opposed to going and flying from someone’s property, but the margins for error are a little higher in those situations, so I have to look at that stuff pretty close. If something were to ever go wrong in a situation like that, I’d rather be at an airport than out at someone’s house in the country.”

To get in the air, Guthrie has to take a running start – he likes to call it “running into the skies.”

“Your legs are your landing gear, so as I pull that wing up over my head and push that power, I start running. I run, run, run until the wind picks my feet off the ground and then I’m flying,” he said.

The paramotor can travel between 15 and 40 miles per hour once it’s in flight, depending on the wind. Guthrie said he always checks what the wind speeds will be in the 1,000 to 2,000 foot altitude range before he flies, and he prefers low wind speeds – about 12 mph – although he can fly in a lot of conditions.

“When I first got my equipment, I literally flew every single day; it didn’t matter the wind then, because I could take off, stay almost at tree top level and land without too much trouble,” he said. “I could fly maybe every single day — just like today, the winds are 14, 15 miles per hour, I could still go out and fly — it just wouldn’t be as fun, because the wind’s going to dictate how I would fly.” 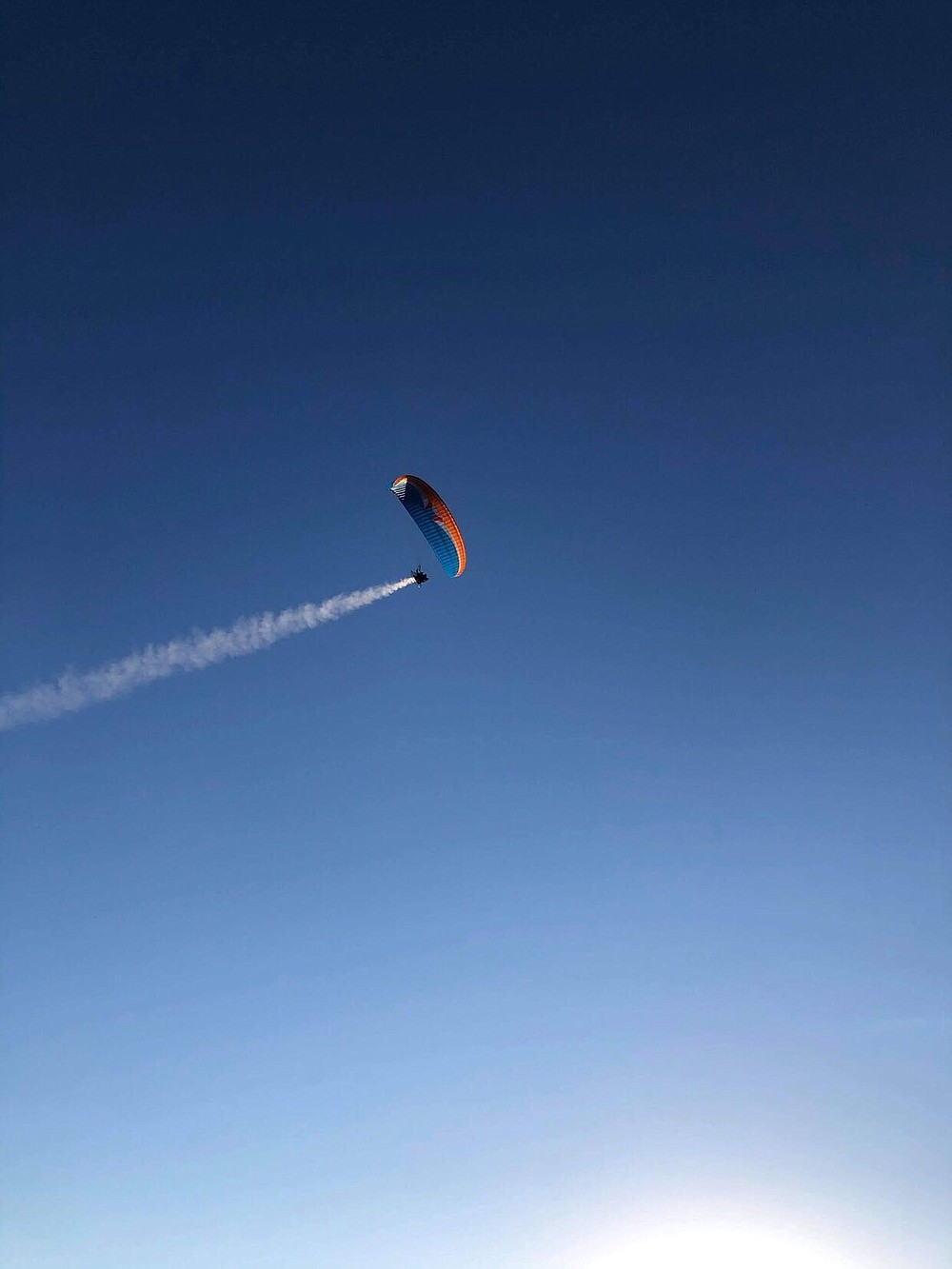 A trail of white smoke can be seen coming from Don Guthrie’s smoke machine attachment on his powered paraglider. (Courtesy of Don Guthrie)

Guthrie admitted that he himself actually does have a degree of acrophobia, or fear of heights. He said on Wednesday, he had to climb on top of the concrete plant he’s a manager at, and he didn’t like it. But flying in the powered paraglider is different, he said.

Right now, Guthrie is the only person he knows of in Union County that flies a paramotor, though he does know of a few people that previously flew them in the area. The community is relatively large in the Ark-La-Tex, though, with groups in Shreveport, Little Rock and in between that fly together.

Guthrie said he’d love to have some local people to fly with, and invited anyone interested in seeing the powered paraglider in action to come watch him fly from the Downtown Airport sometime.

“If anyone is interested, get with me – there’s guys all around that are flying,” he said. “There’s a lot of people flying these and we can get you in contact with someone close enough that you can go and watch it happen in real life.”

Oglee, who has the paramotor school in Springhill, also has a tandem paramotor that can fly two, in case anyone wants to see how they feel in the air before committing to school or buying the equipment.

“I had watched a lot of YouTube and a lot of Facebook videos, but until I went and actually watched someone put on the gear, run into the sky and land — it’s kind of hard to explain how that happens without seeing it for yourself,” Guthrie said.

Those who would like to watch Guthrie fly can contact him on Facebook, on his personal page, or call or text him at 1-870-814-9574. For more information about Oglee’s powered paraglider school, visit the Kyle O School of Paramotors Facebook page.

“(I like it because) it makes people smile; it makes people wonder ‘what is this thing that I see in the air all the time,’” Guthrie said. “It’s about the closest thing to being a bird that I can imagine.”