I’m shipping up to Boston

The title of today’s column is only tangentially related to its subject matter. It’s the title of a song I like by the Irish punk band Dropkick Murphys. When I had my own radio show on KLPI FM at Louisiana Tech, it’s a song I’d sometimes play.

The subject matter of today’s column is just about as punk rock as it gets. How’s that for a segue?

Since we’ve just celebrated our nation’s 245th birthday, I’m going to share with you something that I usually think about whenever the 4th of July rolls around. There is part of me that is quite sure, Faithful Reader, that you have never thought about our country’s founding from this angle.

I could be wrong, of course. And if I am, you may certainly email me and tell me so.

Whenever Independence Day draws near, I often think about the Boston Tea Party. I think about it during the rest of the year too. It is one of my very favorite things about the founding of these United States. And like I said, it is indisputably punk rock. Here is something I bet you didn’t know about it:

The tea thrown into Boston Harbor at the Boston Tea Party was not the property of the British Crown. It was the property of the East India Company, a private corporation that operated throughout the British Empire. Though the East India Company operated more directly in the empire’s holdings on the other side of the world, its goods found their way into the 13 Colonies.

The tea that got thrown overboard at history’s most famous tea party belonged to it, not King George.

At the height of its power, the East India Company maintained its own private mercenary force of 250,000 soldiers, twice the size of the regular British Army. It was a force to be reckoned with.

Anyway, back to the tea in Boston Harbor. The East India Company paid no taxes on the tea.

Those taxes were instead paid by regular folk pursuant to the Townshend Acts passed by the British Parliament in 1767. The tax was imposed to pay the British Empire’s war debt from the French and Indian War, a war fought between the empires of Britain and France for control of resources on the North American continent. These resources were taken, used, and sold by the East India Company for profit. It was by far the greatest beneficiary of the war but did not pay for it. Regular people did.

Those regular people, the participants in the Boston Tea Party, resented being taxed to subsidize a private corporation that was already generating profits from its global enterprises, and more particularly that they were being compelled to do so by a legislative body in which they had no representation.

The American Revolution takes on a bit of a different character once you realize that it was a war fought against a private global corporation which was powerful enough to use the British Crown as an enforcer.

I think about that most every 4th of July.

By the way, below this column you will find a picture of the flag of the East India Company. You will, I’m sure, find its design surprisingly familiar. The Founding Fathers were not without a sense of humor. 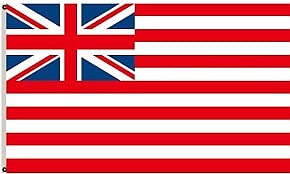