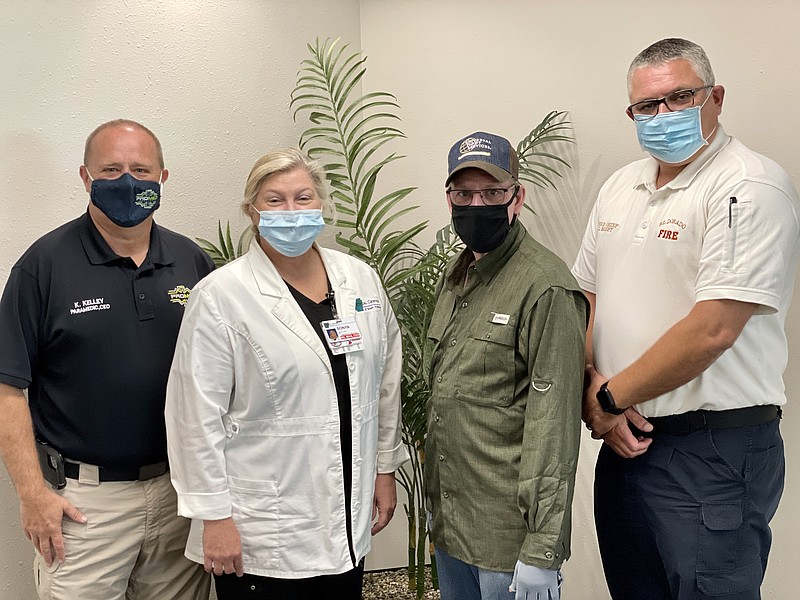 Response to the Feb. 27 Delek Penex Unit fire, where six local men were severely burned due to a flash fire, was a joint effort by numerous local first response institutions.

The Medical Center of South Arkansas, the El Dorado Fire Department, ProMed Ambulance and local law enforcement agencies are all a part of the local emergency planning committee.

That evening, they all worked together to get help on the scene of the fire and transport the injured parties to both MCSA and then the burn unit at the Arkansas Children’s Hospital.

Officials from MCSA, the EFD, ProMed, and one of the fire’s survivors, James Loe, gathered at the hospital last Wednesday to talk about what happened that day and the efforts they all put in to respond to industrial incidents.

Alexandria Bennett, MCSA executive director of business development, said the hospital as well as the other local first responders are ready and well equipped to support incidents similar to the Delek fire.

“It is important for the community to know that we have trained and prepared first responders ready to respond to industrial incidents,” Bennett said. “Especially since we have so many manufacturing plants, chemical plants and refineries. We hope that we never have to use all the training we do, but we do so much behind the scenes to prepare for it.”

Eric Waller, executive director of engineering and supply chain at MCSA, shared some of the training that the hospital does for emergency situations similar to the Delek fire.

“We are required to have what we call, ‘live, in-person drills,’” Waller said. “We create scenarios similar to what happened at Delek and we act like something has just really happened. We walk through those steps, from the door to discharge, to what we would do and how we would handle it.”

Sonya Justice, MCSA executive director of nursing, reiterated what Waller said and explained some of the preparation MCSA physicians and nurses tackle for possible industrial incidents.

“The nurses are required to do a burn class and be updated on the latest care around burns because it does change periodically,” Justice said. “They also have to attend classes on different types of traumas as well.”

MCSA is also an accredited level three trauma center, something that is important when so many other hospitals are an hour or more away.

“A lot goes on behind the scenes to keep MCSA a level three trauma center,” Bennett said. “We serve such a large rural area and not all trauma scenarios can make it two hours to Little Rock or to Shreveport.”

El Dorado Fire Chief Chad Mosby, whose team was part of the concerted efforts to help on Feb. 27, talked about the training they must do.

“We spend a lot of our time with training and education, especially in advanced life support and hazard materials expertise,” Mosby said. “There is a lot of advanced education that we must do, from medical treatments to chemistry and how different chemicals react with each other.”

Mosby said the EFD did not dispatch a fire truck to the Delek facility; instead, Delek’s own fire brigade handled the fire. The patients were brought out of the facility to EFD’s firefighters for treatment and to help get those injured transported to MCSA.

Ken Kelly, president and CEO of ProMed Ambulance, talked about how ProMed helped with transporting the six injured men and making sure that after they got their initial treatment at MCSA they could subsequently be transported to the Arkansas Children’s Hospital in Little Rock.

“We arrange the transportation for getting to the trauma centers,” Kelly said. “It takes a lot of planning, it takes a lot of preparation, but we have some very aggressive protocols here. Both Chad (Mosby) and I have some of the most aggressive protocols in the state as far as what we provide in the community and in situations such as the Delek fire.”

Kelly, who remembers the day of the fire well, recalled some of the challenges that he and his team faced when trying to transport the injured men to Little Rock.

“We knew that we had to go a long distance to get to the nearest burn centers around us,” Kelly said. “We knew that would most likely require air transport because of speed, but we had weather factors that day. No helicopters were available to fly because of weather conditions. So the next step in the plan was to contact fixed wing aircraft that could make the transport. We had to get transportation between the hospital and the airport. So there were a lot of things happening in the background that a lot of people didn’t even know were happening.”

“You all were really on top of things,” Loe said. “I remember while I was on my way to Little Rock, I had a nice little talk with the guy in the back of the ambulance with me…I really appreciate you all.”

Loe, who now wears protective gloves to cover his hands that sustained burns, described some of what he remembers from that day.

“The shoelaces on my boots were melted,” Loe said. “My safety glasses were melted, my hard hat was melted and I came out looking pretty good.”

Low id still healing from his injuries, and he said his day-to-day life has changed as a result.

“I can’t get out in the sun; if I do, some of my wounds can blister really badly,” Loe said. “I go to therapy two days a week. It was five days a week, but now it is two days a week. I have to go back to the children’s hospital for a check up.”

Loe said that for a while, he couldn’t form a fist with either of his hands, but he showed the first responders gathered Wednesday in the room that he now can; he said that achievement felt really good and he is starting to regain feeling and movement in his hands.

“A month ago, I couldn’t even make a fist,” Loe said. “I don’t think people realize how much that means to me to be able to make a fist or simply hold a can of Coke.”

Loe also expressed his appreciation for the El Dorado community and highlighted how community members have shown acts of kindness during this whole ordeal.

“I had someone just come and cut my grass,” Loe said. “They just showed up with their lawnmower and cut my grass. I looked out the window and was pleasantly surprised. There are good people in the world and El Dorado has a lot of good people. A lot of people put a lot into helping us and I really want to express how great this community is.”