New restaurant expected to open in fall after renovations by Marvin Richards | July 2, 2021 at 8:30 p.m. 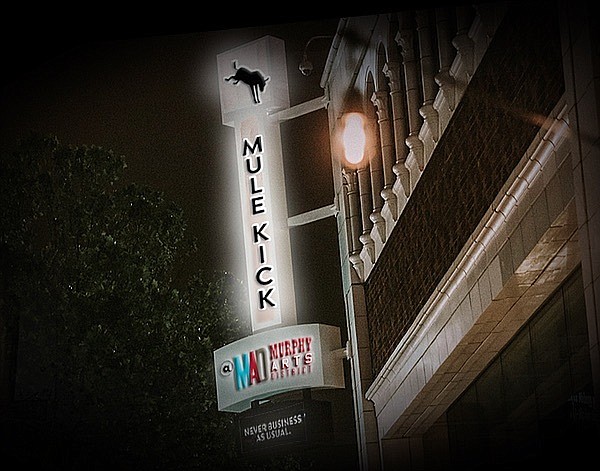 On Thursday, the Murphy Arts District announced that the Griffin Restaurant, which has been closed since March 2020 due to the COVID-19 pandemic, will not be reopening its doors.

Instead, Mulekick, a Magnolia-based restaurant that originally opened in 2019 to primarly serve students at Southern Arkansas University, will be taking its spot as [email protected]

Mulekick owner Christy Ouei said the El Dorado location will serve as an extension of the original restaurant.

“Magnolia will be the flagship from which we operate,” she explained.

Mulekick is known for its pizza, wings and locally-sourced craft beer, according to a recent press release. Christy Ouei said that pizza and wings will always be a mainstay at Mulekick but because of the “fabulous” kitchen at the MAD location, the menu for the new restaurant will expand and new items will be tried, added and or removed depending on customer response.

The opportunity to move into the space and replace the Griffin came through a partnership with MAD formed during the nonprofit’s On Ice events last year, Ouei said.

“They reached out to us and asked if we would do a co-branding event last year. In doing some of that branding, we had been actively looking for another location, even before COVID,” Ouei said. “We knew we wanted to stay in Arkansas and had been looking across the state for a place. It was mentioned to me that Murphy was looking for a new restaurant to partner with and I said, ‘Wow, what great timing. We’re looking for a place to go.’”

Ouei said that Mulekick will be leasing the space and operating under a concession agreement where they provide food and beverages for events at MAD.

Ouei said she has been looking at homes in the area to potentially move to El Dorado, but with it currently being a seller’s market, and considering how close Magnolia is to El Dorado, that move may not be necessary.

“My parents are close, so I didn’t want to leave the area and that was one of the cons when looking at other locations in the state. We think of southwest Arkansas as home, so we wanted to stay down here,” she said.

Mulekick Magnolia opened up back in 2019, employing a lot of SAU students; Ouei made being ecologically sustainable a big part of its mission by “recycling and reusing as much as they can,” according to reporting by the Magnolia Banner-News.

MAD President and CEO Pam Griffin declined to share why MAD’s partnership with the Griffin Restaurant was no longer active, but said she thinks Mulekick fits the MAD mold.

“We are excited to get the restaurant space opened again after it being closed for a year and a half,” she added. “We can’t wait to have people back in that space and enjoying that space. We’re excited to have our kitchen open again so we can do food for hosted events.”

The Griffin Restaurant, flanked on one side by the First Financial Music Hall, opened in 2017 in what was formerly the Griffin Auto Company building, which originally housed a car dealership, repair shop and filling station. An emphasis was put on the restaurant’s farm-to-table menu, which included utilizing fare from the MAD Farmers Market; there was also a farm-to-school program at its beginning.

Mulekick, too, has a lot of locally sourced food at the Magnolia location and it’s something they hope to continue in El Dorado, Ouei said.

“We have ice cream from Loblolly Creamery in Little Rock. They source their raw ingredients locally,” Ouei said. “Our coffee is roasted in Mena, Arkansas. Ninety percent of our beers are Arkansas craft. In the summertime we grow the basil we put on the pizzas as well as the thyme and rosemary we incorporate into some of the drinks. We try to source locally as much as we can.”

“They are really community driven, especially in Magnolia. They’ve done a lot of partnerships within the community as far as events and are very welcoming,” Benson said.

“We believe to have a great customer experience, you have to have a great employee experience,” Ouei said. “So just like we onboarded for the Magnolia location, we are going to be team building and training. The more you get to know the people you’re working with the more you enjoy coming to work and that will then extend to the customer’s experience.”

A job fair, where employees including servers, concessionaires, hosted events staff, kitchen staff and bartenders will be recruited, is scheduled for July 16 and 17; according to a press release, more information about the job fair is forthcoming at mulekickatmad.com.

A concrete opening date for [email protected] has not yet been set, but a press release about the new restaurant said it is expected to open some time this fall.