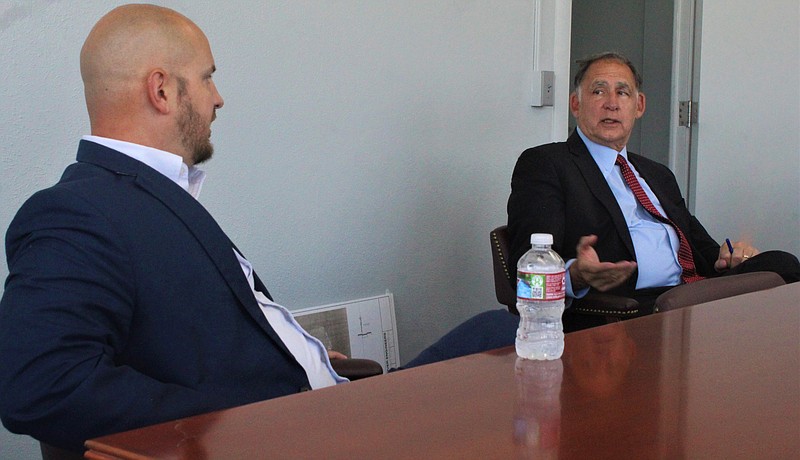 Senator John Boozman visited El Dorado on Tuesday as part of a tour of southwest Arkansas, attending a meeting at South Arkansas Regional Airport with a group of local officials to discuss infrastructure and transportation, among other issues.

“When I have to go and tell my local population that, hey, I know you guys are really hurting but I have to raise your rates because the EPA has mandated this and it has to be done… And then I’m told the city is too big and too little to qualify for any funding or help, you have to get it out of the rates…that’s really tough,” Murtha said.

Boozman responded by expressing his distaste for regulation that “freezes” utility services and business.

Boozman also addressed the importance of broadband access, offering an optimistic view of its expansion in the coming years.

“[Broadband] is something we’ve made a lot of progress with. The states are leading the way and the federal government is providing lots of dollars. That’s something we’ll see, I think, great progress with in the next two or three years. It’s going to take awhile. If you’re in an area and not wired, you’re just not going to grow,” Boozman said.

The broadband discussion led into talk about telemedicine, on which Garner offered a state-level viewpoint.

“There were about 20 bills for telemedicine that have been stalled since I’ve been in that all passed in 2021 because COVID forced those bills to become practical. Once they did, everyone realized they were effective and telemedicine bills were just burning through this session,” Garner said.

SARA manager Jonathan Estes gave an overview of current and near future projects at the airport, including an overlay for runway 422, a project that costs around $4.5 million.

“We’re going to try to start the paperwork, so to speak, for the project next year because it is a very expensive and large project. The state of Arkansas, thankfully, matches up to $250K with the Department of Aeronautics with that. We have to get the state prepared to pay out at least that amount. We’re hoping by the time next year comes around that inflation doesn’t hit and cause it to go over the $4 million that has been [set] by the FAA or DOT. Thankfully asphalt has lagged behind for the general construction. I do know we’ve been seeking funds to restore this terminal building that was built for World War 2, which is $2 or $2.1 million to keep the terminal in its current condition. [The building] is on the National Historical Register and it has been a great benefit to have this,” Estes said.

Estes went on to describe the importance of SARA to the local region.

“I believe El Dorado out of 90 airports is one of eight that offers an air service connection out here. If we lost the EAS [essential air service] program or the air field itself, the next closest airport that would have decent connections may be Texarkana, but in terms of a large hub airport… it’s Dallas and Memphis. So you’re looking at a five-hour drive just to get somewhere you can fly domestically,” Estes said.

Estes added that the next “big project” he can foresee is work on the air field drainage system.

“You all are the definition of the EAS program. You’re sitting in an area where you definitely need air transit [here] with the airports so far, so we really hard to support that [EAS program.] I actually met with the new Secretary of Transportation [Pete Buttigieg] not too long ago and that was right at the top of the list, and he assured me they were on board,” Boozman said.

Garner asked about major state projects that might result from the current federal infrastructure bill in Congress.

“If the current infrastructure package passes, assuming nothing passes, will it be similar to how other worked where state gets a certain percentage, the local gets a certain percentage? Are there any major projects - I-69 was always the big project everyone talks about here that is a pipe dream… What I’m wondering is, what will states get, what will local get, will there be any major federal push as far as infrastructure programs?” Garner asked.

“I think it would be probably similar… The federal government now is reluctant to just give it to the state governments. I suspect there will be some kind of formula. The good news is that there are a lot of people on both sides of the aisle protecting the smaller states,” Boozman said.

Boozman, who was originally elected in 2011, is currently seeking to be re-elected to his Senate seat in that 2022 race.