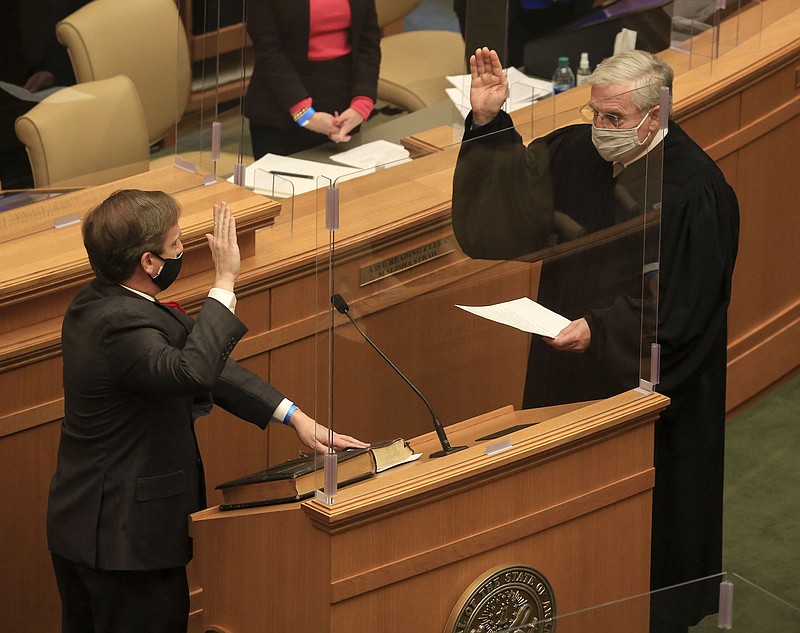 Speaker of the House Rep. Matthew Shepherd, left, R-El Dorado, is sworn in by his father, United States Circuit Judge Bobby E. Shepherd, Monday Jan. 11, 2021 at the state Capitol in Little Rock on the first day of the legislative session. (Arkansas Democrat-Gazette/Staton Breidenthal)

The Arkansas House began its 2021 regular session on Monday with a vote to seat all 100 members, including Democrat Ashley Hudson, whose election in House District 32 was contested by her opponent, former state Rep. Jim Sorvillo, R- Little Rock.

The vote to seat all 100 members was approved 96-1, with two members voting “present” after no one voiced any objections to Hudson’s win.

Shepherd was first elected House Speaker in 2018. He did not face opposition in his re-election for the 93rd General Assembly.

The vote to seat all members put to bed disputes over Hudson’s 24-vote victory over Sorvillo in the November election. Sorvillo argued that errors in the vote-tabulation process that resulted in several disqualified ballots being counted made the winner of the race impossible to determine.

Multiple courts and the Arkansas Claims Commission rejected Sorvillo’s claims however, and his final hopes of throwing out the result rested with the House. He said last week he would not lobby his fellow Republicans to refuse to seat Hudson.

Before the vote, Arkansas Secretary of State John Thurston read the names of all 100 members-elect, including Hudson, who he said had been certified as the winners in their districts.

With Hudson’s victory and swearing-in, the House will be made up of 78 Republicans and 22 Democrats.

The Senate formally elected Sen Jimmy Hickey, R-Texarkana, as the Senate president pro tempore for the next two years. He succeeds Sen Jim Hendren, R-Sulphur Springs, as the Senate’s leader. In brief remarks, Hickey described the Senate as “a salty group for sure.”

He urged senators to respect each other and to communicate with those with whom they disagree on matters.

Hickey asked senators to provide an example for the state and nation to emulate.

The Senate rejected a proposal from Sen. Stephanie Flowers, D-Pine Bluff, to require senators who don’t wear masks in the Senate and adjacent areas to forfeit their per diem for that day.

Under this proposal, future violations would cause senators to be excluded from the next Senate meeting.