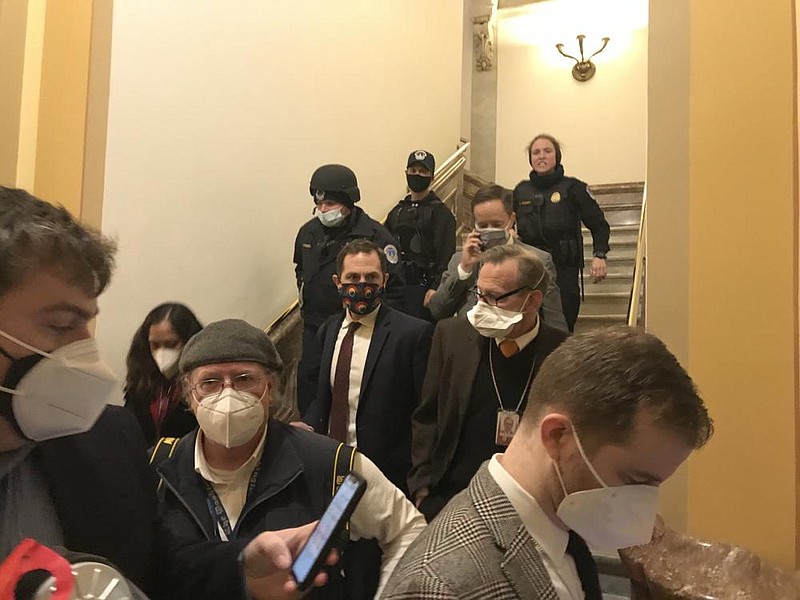 People are escorted out of the House chamber Wednesday after protesters stormed the building. From there, many in the building entered the tunnels beneath the building to find refuge. (Arkansas Democrat-Gazette/Frank Lockwood)

WASHINGTON — One hopes to be a profile in courage when under threat, but most of the people locked in Wednesday on the House floor of the U.S. Capitol — U.S. representatives, reporters and staff members — were flat-out scared.

Fear is what you feel when you watch officials barricade the same entranceway used by presidents on State of the Union day.

And fear is realizing an official has delivered a prayer that is uncommonly fervent and reverent and real. This wasn’t “ceremonial deism” — it was an earnest plea for divine protection, and I hoped that God would grant it.

I was in Washington on Sept. 11, 2001, when terrorists targeted the Pentagon and leveled New York City’s Twin Towers.

This time, the target wasn’t symbols of America, it was American democracy itself.

The enemies weren’t foreigners this time, they were home-grown.

After losing at the polls, in the courts and at the Electoral College, President Donald J. Trump, in his closing days in office, had summoned his followers to rise up and “Stop the Steal.”

After a fiery presidential call to arms, the whirlwind was unleashed.

Many who flocked to Washington, though consumed by unfounded conspiracy theories, were decent, law-abiding Americans. But there were thousands of insurrectionists as well. When they spoke of revolution, they meant it.

Between the House and the Senate chambers, windows overlook the Capitol’s East Front. Just before 1 p.m., one could see that the crowds were sparse and separated from the Capitol by temporary barriers. By 2 p.m., their ranks had swelled.

Glancing outside, I could see Trump supporters, already past the barriers, swarming around overwhelmed law enforcement officials, trying to get inside.

Police radio traffic, echoing through the halls, made it clear that the citadel was imperiled. The rioters had taken the Capitol Visitors Center. Anyone in the vicinity with ears could tell it.

If their candidate couldn’t win, they would shut down Congress.

Tear gas had been fired in the rotunda, we were told.

A bullet would eventually be fired, claiming one life.

Inside the House chambers, lawmakers and others could hear the insurrectionists noisily approaching.

As a result, we were told to unwrap emergency equipment: “chemical, biological, and radiological protective air-purifying escape respirators.”

According to congressional rules, amateur photographs are forbidden in the House chambers. With all hell breaking loose, the restriction was disregarded.

In the visitors gallery, someone shouted at House Republicans to take action: “Call Trump. Call your friend.”

The demand drew quick rebukes from the president’s supporters. Since the man making the outburst was U.S. Rep. Steve Cohen, D-Tenn., he wasn’t ejected.

At some point, the House began a “Recess Subject to the Call of the Chair.” No one knew when the people’s business would resume.

The U.S. Capitol Police, generally calm and always professional, shepherded us out of the gallery, urging us, over and over again, to hurry.

I dropped my White House press pass as I was preparing to leave. My COVID-19 mask was similarly abandoned, replaced by the gas mask.

Rushing toward a third-floor stairway, I glimpsed some of the criminals, spread-eagle on the ground, brought to heel by law enforcement.

Walking swiftly, we entered the tunnels beneath the Capitol and looked for refuge.

Soon, news would come of a shooting on the Capitol grounds, followed, hours later, by news that the gunshot victim had died.

U.S. Rep. Rick Crawford was the lone Arkansan to support the challenge, saying it was important to look into Trump’s ongoing accusations of voter fraud.

All six members and their staffs were safe, spokesmen said.

In the hallway, I passed Spanish-language television journalists. They would broadcast news of the assault on democracy to nations some Americans deem “banana republics.”

While I was hunkered down, rioters and looters continued their mayhem.

At least one man, identified in news reports as Richard “Bigo” Barnett of Gravette, broke into House Speaker Nancy Pelosi’s office, propped his feet up on a desk and stole an envelope on the way out.

The Arkansan will be easy to identify when they haul him into court. He wasn’t wearing a mask (and he boasted about what he had done).

Once I reached safety, I called Lawyers for Trump National Co-Chairwoman Leslie Rutledge, asking the Arkansas attorney general and 2022 Republican gubernatorial candidate whether she would support the Electoral College or side with Trump.

She declined, for the second-straight day, to say where she stood.

Lt. Gov. Tim Griffin, another gubernatorial hopeful, did weigh in, telling me, “I honor and respect the Constitution and the process the Founding Fathers established, including the vote of the Electoral College.”

In an interview, as U.S. Capitol Police were securing the buildings and preserving a homicide scene, Crawford said his goal had never been to strip the Electoral College of its authority.

His aim, he said, was to draw attention to perceived flaws in the 2020 presidential election and to coax the U.S. Supreme Court to intervene in the dispute.

Witnessing thugs rampage in the Capitol on Wednesday, Crawford said he felt “a sense of betrayal.”

“This is not Venezuela or Zambia or something like that,” he said.

Asked whether Trump should concede defeat, Crawford said, “If I was the president of the United States, seeing what I saw today, I would feel compelled to do that.”

The 45th president, he conceded, is unlikely to do so.