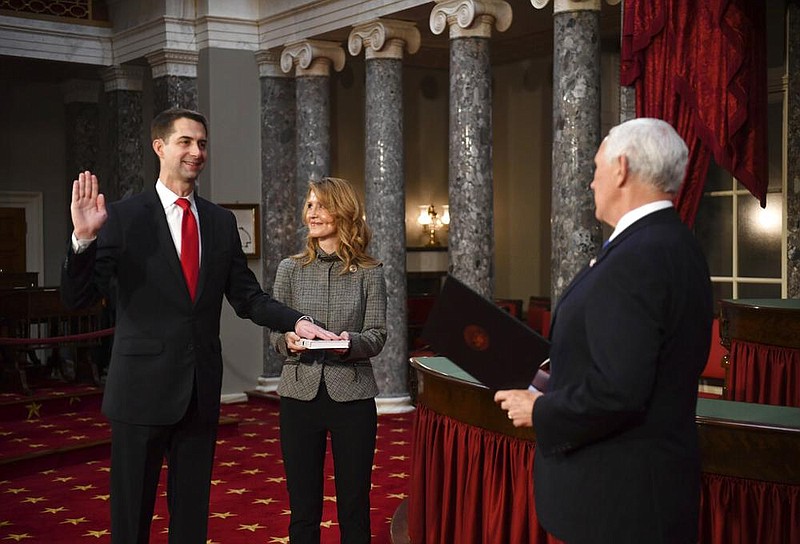 Vice President Mike Pence administers the oath of office to U.S. Sen. Tom Cotton, R-Ark., as his wife Anna Peckham holds a Bible during a reenactment ceremony in the Old Senate Chamber at the Capitol in Washington on Sunday, Jan. 3, 2021. (Kevin Dietsch/Pool via AP)

WASHINGTON — President Donald Trump criticized U.S. Sen. Tom Cotton on Monday for promising to respect the will of the Electoral College, portraying it on Twitter as a mistake that will be long remembered.

The Little Rock Republican had announced late Sunday that he would oppose efforts to overturn the certified results of the 2020 presidential election.

“How can you certify an election when the numbers being certified are verifiably WRONG. You will see the real numbers tonight during my speech, but especially on JANUARY 6th,” Trump wrote, hours before speaking at a campaign rally in Georgia.

“@SenTomCotton Republicans have pluses & minuses, but one thing is sure, THEY NEVER FORGET!,” Trump’s tweet concluded.

“The ‘Surrender Caucus’ within the Republican Party will go down in infamy as weak and ineffective ‘guardians’ of our Nation, who were willing to accept the certification of fraudulent presidential numbers!” he tweeted.

While Trump has accused the U.S. of having rigged elections in both 2020 and 2016 — the year he won the presidency — he has failed to produce sufficient evidence of fraud to sway a state or federal court.

Dozens of legal challenges by Trump in several states last year were unsuccessful.

The Republican Party of Arkansas on Monday declined to weigh in on the Trump-Cotton dispute, referring a reporter to the senator’s office for comment.

Cotton’s office had not responded as of early Monday evening.

The House and the Senate are scheduled to meet in joint session today as Vice President Mike Pence opens the certified returns from all 50 states and the District of Columbia.

Of the 538 duly certified electors who gathered Dec. 14, 306 cast votes for Biden and Vice President-elect Kamala Harris while 232 favored Trump and Pence.

The blocs of electors likely to be disputed were all certified as duly elected by the governors of their state, with the secretaries of state also vouching for the results. The documents, bearing state seals, were shipped to the U.S. capital last month.

At least a dozen Republican senators, including Josh Hawley of Missouri and Ted Cruz of Texas, have said they will challenge the election returns; an 1877 law provides a mechanism for challenging the returns that are not “regularly given” or “lawfully certified.”

Dozens of Republican House members, including U.S. Rep. Rick Crawford of Jonesboro, have also said they will object.

In a written statement Sunday evening, Cotton expressed disappointment in the outcome of the Nov. 3 election but said he wouldn’t try to overturn the certified election returns.

A move by Congress to overrule the Electoral College “would take away the power to choose the president from the people, which would essentially end presidential elections and place that power in the hands of whichever party controls Congress,” he wrote.

Such a move would undermine the Electoral College and federalize election law, Cotton said, portraying both as longtime Democratic goals.

“I’m grateful for what the president accomplished over the past four years, which is why I campaigned vigorously for his reelection. But objecting to certified electoral votes won’t give him a second term,” Cotton said.

He called for a commission to be created to study the Nov. 3 election and recommend reforms, saying he shares “the concerns of many Arkansans about irregularities in the presidential election, especially in states that rushed through election-law changes to relax standards for voting-by-mail.”

While Cotton isn’t the first member of the all-Republican Arkansas congressional delegation to side with the Electoral College, he’s the first to receive a public presidential rebuke for doing so.

U.S. Rep. Bruce Westerman of Hot Springs said Sunday that he is still evaluating the issue.

In addition to Cotton and Boozman, at least 19 other Republican senators have sided with the Electoral College, The Washington Post reported Monday. The list includes Bill Cassidy of Louisiana, Richard Shelby of Alabama and Roger Wicker of Mississippi.

“I’m planning to certify the Electoral College. I’ve made that clear,” Wicker said Sunday. “The overwhelming weight of the evidence is that Joe Biden defeated my candidate, Donald Trump, and I have to live with it.”

On Feb. 6, 2019, the day after delivering the State of the Union address, Trump called Cotton and they discussed how the speech had gone.

“Tom Cotton is a great guy. He’s a great senator and a friend of mine,” Trump told the Arkansas Democrat-Gazette minutes afterward. “We just hit it off from day one. I met his parents. I really liked them.”

At the time, Trump said he planned to campaign in Arkansas for Cotton’s 2020 reelection. With the Democrats failing to field a challenger, the trip ultimately proved unnecessary.

Hal Bass, an emeritus political science professor at Ouachita Baptist University, said it’s too soon to determine the significance of the rift between the White House, Cotton and other prominent Republican officials.

“We’re not going to know the real aftershocks of all this ’til down the road. But, at the moment, it suggests considerable unrest within the Republican Party at the end of the Trump presidency,” Bass said.

After presenting a united front for most of the past four years, the party “is fragmenting at this late date,” he added.

As president, Trump has encouraged primary challenges for Republicans he has deemed insufficiently loyal.

Cotton, who won a second term in November, won’t be up for reelection until 2026.

“By the time his next Senate election would come up, this will be in the distant mist of memory,” Bass predicted.

“Even if Cotton were to mount a presidential bid in 2024, I think something like this would just be a blip. There’d be far more eventful, far more consequential material to work with in terms of evaluating his presidential candidacy,” Bass said.