Delek: Investigation into fire to be launched 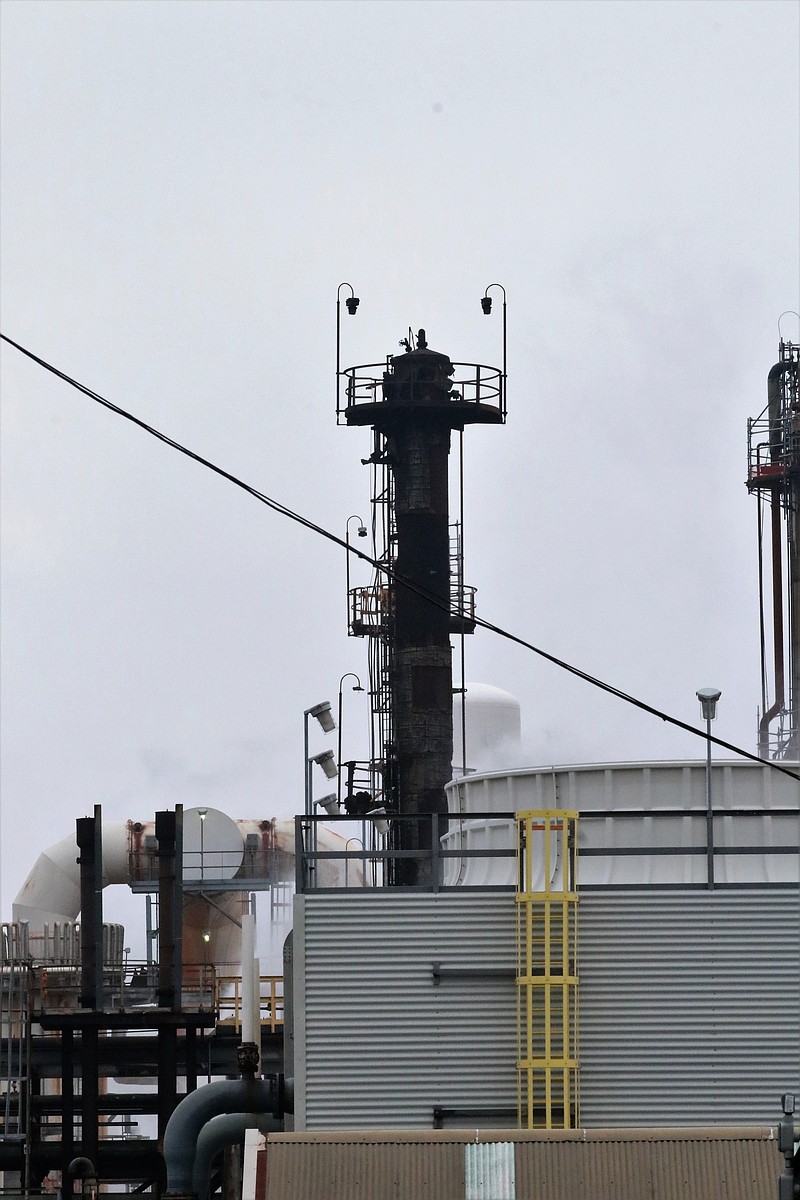 A blackened tower at the Delek: El Dorado Refinery, formerly known as Lion Oil, is hosed down. A fire broke out at the refinery Saturday and the cause was still unknown Sunday evening. (Courtesy of Penny Chanler)

A fire that broke out at the Delek: El Dorado Refinery, formerly known as Lion Oil, Saturday afternoon will be investigated “as soon as possible,” a statement released by Delek US Holdings late Saturday night said.

“Earlier today, a fire occurred at the Penex unit of our refinery in El Dorado, Arkansas. Our on-site emergency response team, with the assistance of the El Dorado Fire Department, extinguished the fire,” the statement says. “We immediately began to monitor the air quality within the refinery and the community and have detected no adverse impacts.”

Alex Bennett, executive director of business development at Medical Center of South Arkansas, said on Saturday that six patients were brought to the hospital and four were subsequently transferred to the Arkansas Children’s Hospital (ACH) Burn Unit, explaining that almost all burn patients in the state are transferred there. She said Sunday that the remaining two patients had also been transferred to ACH.

“Our hearts and prayers go out to them and their families during this difficult time. We are committed to supporting these individuals,” Delek’s statement says.

The statement goes on to say that the refinery was in the process of turnaround activity, so there were no operational impacts to Delek Logistics or Delek US.

“All of our facilities have rigorous, well documented safety controls. Safety is one of our Core Values. A full investigation will be launched as soon as possible,” the statement concludes.

Mira Jerry, whose husband Kenneth Jerry was one of the injured workers, said she was notified by a company nurse of her husband’s injuries.

“He has second- and third-degree burns on his face and hands. He is on a vent due to swelling of his throat and neck and will have surgery for skin grafts,” she said in a message to a News-Times reporter Sunday. “(He) is in stable condition at this time (and) receiving excellent care at ACH burn unit.”

She said both she and her son have been able to visit with her husband in the hospital. She added that prayers are appreciated at this time.

“We are praising God for His protection and healing, and we appreciate all the prayers being lifted up for him and his co-workers,” she said. “I’m doing fine. God is strengthening me, as well as so many friends and family reaching out to help in so many ways. I’ve been with (Kenneth Jerry) since last night with the exception of going to the hotel this morning for a couple of hours. … They allowed my son to come stay with him while I was out.”

Blake Fernandez, senior vice president of investor relations at Delek, said there wasn’t much more information about the fire available Sunday afternoon other than what was published in Saturday night’s statement. He emphasized the importance of the workers who were injured to the company during a phone call Sunday afternoon.

“The safety of the people and the families is critically important to us, and we’re taking it serious. We’ve basically mobilized the entire team; people are going down there from multiple refineries and we’re trying to take care of everyone,” Fernandez said.

Asked if the company had policies in place to assist with workers’ medical costs in incidents such as Saturday’s fire, Fernandez said Delek doesn’t “get into sharing a lot of the minutiae details on that front,” but that the company’s “first priority” is its workforce.

“We’re not sitting here trying to cut costs or expenses. This is of the utmost priority to us; this is our family,” he said.

Jordaan Barron, whose boyfriend Daniel Whatley was also injured in the fire, said he too was in stable condition Sunday afternoon. Like Kenneth Jerry, he was also on a ventilator and had suffered severe burns.

“I believe all are on the vent. Some may be worse than others, but they are stable and going to be okay. Just going to be a long road,” she said in a message to a News-Times reporter.

Barron said she learned of Whatley’s injuries from the mother of one of the other victims. She said that since burn patients are more prone to infection, only two people are allowed to visit Whatley, and only one may go in his room at a time.

Asked how she was doing, she said she’s “as good as I can be.”

A fire previously broke out at the refinery in February of 2019. No cause was released for that fire, and Fernandez said Sunday that he didn’t have details on it off-hand.

The News-Times could not confirm the names of the others injured in the fire by press time Sunday. This is a developing story; visit eldoradonews.com for the latest updates.

Caitlan Butler can be reached at [email protected]